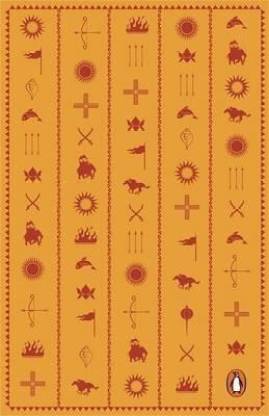 An epic that never loses its charm, Mahabharata: (Volume 2) is an unabridged English translation of the great Indian epic. The book is a part of a series of ten volumes brought out by Penguin Books.

One of the most enthralling sagas ever narrated, the Mahabharata is more than just a Sanskrit mythology. The epic encompasses the cultural and social life of an entire nation, India. The epic has been widely translated into many languages, and has also been adapted into various other media. Mahabharata: (Volume 2) is the second book in the ten volume series that is a rare full length translation of the formidable 80,000 couplets or shlokas.

The book is a translation of the last part of the Adi Parva, the entire Sabha Parva, and the initial part of the Vana Parva. The parts of the epic covered in this volume include Arjuna’s marriage to Subhadra and his sojourn in the forest, the conflagration of the Khandava forest, the crowning of Yudhishthira as emperor, construction of the assembly hall by the Pandavas and their conquest of the world, Duryodhana’s envy, the two dice-games, disrobing of Draupadi, and the story of Damyanti and Nala.

The Mahabharata deals with all possible human emotions, and thus it still captivates the readers’ minds in a digital age flooded with literature. Mahabharata: (Volume 2) beautifully brings out the plot in a lucid, easy to read manner for contemporary readers. The many subplots with their artful digressions and twists retain their original thrill in the translation. The ten volume series translated by Bibek Debroy, in collaboration with Penguin Books, is based on the Critical Edition compiled at the Bhandarkar Research Institute.

Bibek Debroy is a well known academician, economist, and author.

His other known publications include Corruption in India: The DNA and the RNA, Economic Freedom of the States of India, Gujarat: Governance for Growth and Development, India: The Political Economy of Reforms and The Bhagavad Gita, A translation.

Debroy was born in 1955. He attended the Ramakrishna Mission in Narendrapur and graduated from the Presidency College, University of Calcutta. He has also studied at the Delhi School of Economics and Trinity College, Cambridge. Debroy is also a Visiting Honorary Senior Research Fellow at Institute for South Asian Studies, National University of Singapore. In the past he has taught at his alma mater in Calcutta, and various other institutes. He has also worked in various capacities for the Government of India, and has served as the Consulting Editor of Indian financial and other newspapers. He is currently a professor at Centre for Policy Research, New Delhi.

Depth that was beyond your imagination

I have read first volume & about to complete second soon. Seeing 6 volumes in market, I feel more excited about it.

As a big time fan of Mahabharata, I wanted to read a "Complete Mahabharata". After long time I found this book and it is indeed a detail book on Mahabharata. I personally found it "awesome"... Language used in the novel is also pretty rich.
Those who have read novels like Harry Potter and The Lord of the Rings might have felt that movies for the same are not up to the level of ...
READ MORE

I had always been fascinated by MAHABHARAT since that epic retelling by B.R.Chopra on DD 1. But the curiosity as to why such an epic existed was always on my mind. These books by bibek debroy are the pure essence of the real mahabharat with the intensity of taking you on a spiritual journey.
A must read for everyone who is curious as to why such an epic story was told and what real circumstances (in detail) were responsible for this epic saga of dharma, karma and arth.
READ MORE

One of the best translations on Mahabharata.. The author has taken pains to convey the content in lucid manner. Hats off to Bibek Debroy Ji..
Must have for everyone..
READ MORE