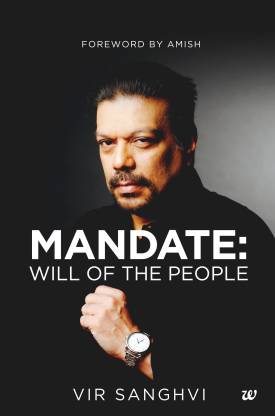 Mandate - Will of the People (English, Paperback, Sanghvi Vir)

Mandate - Will of the People  (English, Paperback, Sanghvi Vir)

Based on his personal experiences, memories and numerous interviews, Vir Sanghvi brings you a candid account of the recent Indian political history in Mandate: Will of the People.

This title offers an incisive account on the general elections that shaped today’s India. Sanghvi talks about the little-known, behind-the-scenes details, giving you insider information on men and women behind the headlines. The book also discusses the declaration of the emergency, the story of Sanjay Gandhi, the Punjab riots, the assassination of Indira Gandhi, emergence of Rajiv Gandhi, and the Bofors controversy among several other major political events of India. It also delves into several political questions that experts try to find the most suitable answers to.

Vir Sanghvi is an Indian journalist and author. He was born in London in 1956. He graduated from Brasenose College, Oxford. He was working for India Today, and when the magazine wanted to start India’s first city-focused magazine, Bombay, it chose Vir Sanghvi to run it. At the young age of 22, Sanghvi became the editor of the new magazine and made it a success in no time. He has also anchored shows on Doordarshan and NDTV. He is currently the Editorial Director of the Hindustan Times.

presents inside political story happend in last 3-4 decades of our country...its worth to read.

really nice book, gives many hidden key info about the political story which happened in last 3-4 decades in our country which rarely public would be knowing. Mr. Sanghvi has written in very simple language and tried to cover almost every hidden facts. If anyone have interest in politics specially of our country then those one can go for this book....I enjoyed the book and finished in just few days.
READ MORE

Often political history reads like a monologue which I lose interest as I read a while. But Mandate is different, it is brief yet insightful and dramatic. Not signs of a political book isn't it ?

The covers sequence of events which led to the election mandate since the 1971. I was awestruck to learn about the dramatic events which unfolded in the past. Events like Indira's socialist reforms, her election disqualification, emergency, operation blue start and subsequent point blank murder wer...
READ MORE

Not the best but worth a read

Mandate - Will of the People is worth a read for the uninitiated in India politics. Vir Sanghvi, a seasoned journalist uses his own life experiences and interviews to weave a narrative that is gripping and lucid. The book definitely is not an eye-opener for politics-fans but surely will help the new generation get a hint of the history of modern India.

Full review up on my blog.
READ MORE

The book deals with the history of Indian politics, covering the time frame of 1971-2014. The book is a kind of political journey that carries striking revelations. Reveals the surprising facts about prominent personalities that we never knew.

The best thing about this book is that it is a fast-paced read, and it can be an interesting read for you even if you do not h...
READ MORE

Politics is something that very much piqued the interest of common people. This intricate game which doesn't follow a set of rules is sure to have a lot of clandestine incidents and affairs in store- most of the times we think in this way. Vir Sanghvi's 'Mandate: Will of the People" is an ideal read for those who want to have a take on India's recent political history without spending much time.

The book unveils many a thing that are unknown to even politically conscious people. The nuts an...
READ MORE

Insightful. Though I’ve been witness to some of the atrocities committed by the Indira Gandhi regime during the Emergency as a child, I was not aware of some of the facts mentioned by the author in the book. They were a revelation. Another thing that I found interesting is the insight into the weaknesses/ unknown traits of some of the well known figures in Indian politics. Smt. Indira Gandhi’s oratory skills have won her many a fan both within and outside the country but how many of us are aw...
READ MORE

A quick insight into Indian Politics

Have you ever wondered what actually triggered the demolition of Babri Masjid? Or what the Bofors issue is all about? This book is written for the common man to find answers to such questions and more. It is a well researched account of achievements and failures of each Prime Minister our country has had, crises faced, roles played by other politicians, family and what led to what.

Vir Sanghvi is a name that needs no introduction. He has shared his own takes on different incidents and narra...
READ MORE

Nice Read about Indian Political History.
The book is an insight to the Indian Politic, and tells some facts which might be new to most of us in a fast , easy approach.
Must read !!!
READ MORE

Veer Sanghvi's Mandate : Will of the People is an interesting read. Spread over the elections ranging from the year 1971 to the latest mandate of 2014 the book rivets you to your seats through incidents which shaped the future of the nation.

You wont find a crispier story of Indian politics!

Mandate is simply a tale of Indian politics from 1970s to the early 2000s, sans views, opinions or unnecessary gyaan about its impact. And that’s the very beauty of this book. It’s a ready key to knowing the people, events and forces that contributed to the creation of the country we live in today.
READ MORE

1
0
Permalink
Report Abuse
+
All 16 reviews
Have doubts regarding this product?
Safe and Secure Payments.Easy returns.100% Authentic products.
You might be interested in