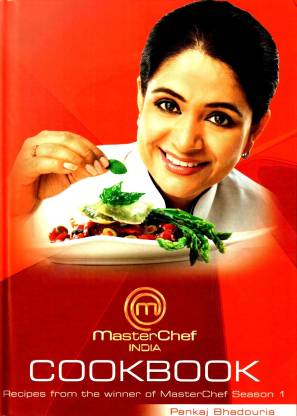 In Masterchef India: Cookbook author Pankaj Bhadouria, the winner of the MasterChef India 2010, offers some of her most delectable and mouth-watering recipes to readers.

Pankaj Bhadouria has become a household name in the country after winning the MasterChef India 2010 competition. She released her own cookbook which features a selection of recipes that are every bit as impressive as they are easy to make. The book is inspired by the chef’s personal experiences with cookbooks and experimental cooking. The author has dedicated the book to Indian housewives based out of small towns, who often give up on a recipe because they are unable to find the proper ingredients. The book contains recipes which can be prepared with ingredients that are easily available. The recipes featured in the book come from Indian as well as international cuisines. These dishes can be prepared with readily available ingredients which make the book an excellent referral for amateur chefs.

Pankaj Bhadouria is the winner of the MasterChef India 2010 contest. She has completed her Bachelor’s degree in Education and a Master’s Degree in English Literature. She taught English at school level for over 16 years, before contesting in Masterchef India 2010. Bhadouria conducted a workshop on healthy Indian cooking at Cambridge University, UK and was also invited to the Varli Food Festival, New York, in 2011 and 2012. She hosts a popular TV show for Star Plus called Pankaj ka Zayka.

The book is attractive with pictures available for all recipes. It has an excellent collection of innovative recipes by the Master Chef, her co-participants and the judges, Ajay and Kunal. I did not like the fact that the vegetarian and non vegetarians recipes are not segregated. I have tried a few recipes and most of them turned out well. I would advice to be careful with measurement of ingredients and go by your conscious thinking. For example the preparation of Ker Sangri if done by book's...
READ MORE

Was very unhappy with the book

I got this book with full of enthusiasm but the book failed to impress me. Being a vegetarian ,i tried few vegetarian recipes but none of the recipes tasted good.
In the quick fix section, i tried Mushroom and spinach stir fry and Spinach and mozzarella samosa and both the recipes turned out not that tasty and it never looked like the picture in the book. In Spinach and mozzarella samosas, the filling for the recipe tasted bad though the outer pastry was good.
In the dessert section, Chocol...
READ MORE

Not a good book for vegetarians

I bought this book hoping I would get some good recipes, but it turned me down. Most of the recipes are non-veg. But when I tried veg recipes also,its did'nt come out well. Specially chickpea vada and broken wheat salad. Most of the ingredients are not available handy. On the whole,this book is a crap.

PS: Do not go by seeing pictures on book. Buy always sanjeev kapoor's books,.. Its worth your money.
READ MORE

good book to have as a collection

First of all i must say superlike performance by flipkart.ordered the book on tuesday late night and recieved it by thursday afternoon.great package.
Now coming to the book...not only the book looks good but the content is also amazing.vast collection of dishes which are worth trying as well as very easy to try.Gr8 book by first Masterchef winner.
READ MORE

Gifted this to a friend who loves to cook and she is super delighted. Full of colorful illustrations and easy step-by-step guidance, this book covers different type of mouth-watering snacks, lunch bites, dinner and desserts. I strongly recommend it!
READ MORE

Good Recipes to follow. Cooking is an art and ever evolving and to be honest there are no short cuts. For vegetarians, many a time you could use vegetarian protein items for a meat dish and try out the results. Don't buy if you are looking for mundane stuff. But if you like food, this should be part of your collection!!
READ MORE

This book has excellent compilation of recipes by Pankaj Bhadouria. It also contains few recipes by Masterchef Judges and other participants. Most of the recipes can be made quickly i.e. below 30 minutes. Also the quality of pictures is amazing. Hats off to Pankaj Bhadouria.
READ MORE

I purchased that book but i don't like recipes in book ... it ok ok book like cooking book...waste of money... so i suggest u please don't buy book
READ MORE

I just purchased the Book. More excited to see the photographs of dishes and hope it replicate the same.I love cooking so I just wanted to try the recepies.I have seen the comments of others which seemed interesting.
READ MORE

1
0
Permalink
Report Abuse
+
All 11 reviews
Have doubts regarding this product?
Safe and Secure Payments.Easy returns.100% Authentic products.
You might be interested in