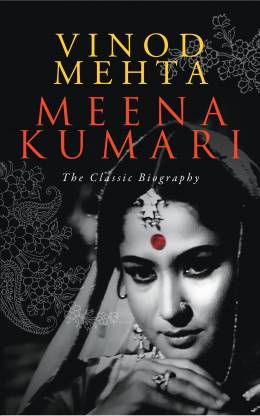 
She was his favourite heroine, or one can say she still is. He wrote her biography a few months after she passed away. She represented what no one else could on screen according to him and rightly so. She charmed him and he never met her. Maybe that is the beauty of interactions you do not have – you have them and those are the ones that last forever. It did for Vinod Mehta, when he started writing his book on the legendary Meena Kumari in 1972.


The book has been reprinted by Harper Collins and it is a boon to all lovers of biographies and but of course for fans of the actress. Meena Kumari’s life was always seen upon as one of tragedy. From her unsuccessful marriage to the various lovers who used her, she was always the centre of attention for the longest time. “Meena Kumari” talks of the actress as the author’s “heroine”. He speaks fondly of her. He speaks of her with great sadness. He speaks of her life, her childhood, her voluminous body of work and the way she lived and died. At the same time, he tries to get away from the “tragedy queen” bracket cut out for her.


The writing is vivid and paints pictures in the reader’s head. It is empathic and yet controlling, without becoming too sentimental. Vinod Mehta writes with a connection which is also quite neutral. He has documented every single aspect and has also to a large extent not judged people in her life, which would have been quite difficult to do. Read the biography to know more about one of the reigning stars of the Indian Film Industry and you will not be disappointed

Vinod Mehta's eye-opening biography covers the story of Meena Kumari, one of Bollywood's most prominent heroines.

Mahjabeen Bano was born to a poor Muslim family, one that almost abandoned her in an orphanage. Despite her wishes, her father dragged her into a life of film, where she entered as a 7 year old. She quickly gained fame as Meena Kumari, and acted in several mythological movies. She moved on to a role as a heroine, and won the first Filmfare Award for her performance in Baiju Bawra. Her life, writes Vinod Mehta, was full of as much drama as her movies. Her love-lit marriage with Kamal Amrohi ended in disaster, and by the time it was rekindled, she had already descended into alcoholism. At the time of her death in 1972, of of liver cirrhosis, she was left penniless. This is her story.

Vinod Mehta is the editor-in-chief of Outlook India. Some of his other works are: Bombay: A Private View, The Sanjay Story, Mr Editor, how close are you to the PM? and Lucknow Boy: A Memoir.

He graduated from Lucknow University and launched a series of popular publications including the Sunday Observer, The Independent and The Pioneer.

If we really go deep into knowing the life of indian heroines, most of them must have been with a tragedy life. No doubt, India has produced many great heroines of all times and one such is Meena Kumari. I am a south indian and knowing about the bollywood movies and other stuffs puts me into lots of interest and this book written by Mr Metha is a excellent master piece of all times. I had gone thro all pages of this book and it is heart touching. WOnder many times, why god has played with man...
READ MORE

avoidable
it is a laboured effort..in my opinion
there is not enough personal information barring her stormy relationship with Kamaal Amrohi and Certainly not enough pictures from her personal life. as a fan i already know about her films and career. i would have liked more about her family life..her relationships with others not only romantic liaisons. also.. in order to show 'his heroine' in a positive light does the esteemed author have to run down other actors?
it does not make for a grip...
READ MORE

.Must read for those who want to know more about this versatile actress.

I was excited to read this book even before it was re-released. Though the author has never met the actress, he paints a wonderful portrait of this lady. Hats off to Vinod Sir for his eloquent writing style and for binding the readers till the story ends. Must read for voracious readers.

I would also like to thank flipkart for timely delivery. You guys are doing a great service especially for those living in remote areas.
READ MORE

MEENA KUMARI written by the late Vinod Mehta in his forthright, lucid style, made for interesting and nostalgic reading. Ironically, the book reached me just a day after he had passed away.

Though he had never met the actress personally, Vinod Mehta, as a biographer, has managed to successfully draw up an eloquent portrait of the artist and the woman, revealing lesser known facts about her initial phase as a child artist forced into working in films due to hard times, the salad years of succ...
READ MORE

Simple and to the point. It gives a wonderful insight to Meena Kumari's life.
Got some charming photographs of Meena Kumari too. I recommend this to all fans!
READ MORE

nice book and greatt story and book binding was really awsome....and wroth for money i bought it to gift someone but after reading it i have planned to gift this book for 2 more frnzzzz so vinod mehta such a great author and meena kumari a beautiful girl greatttttt combination
READ MORE

Great Read.. Totally captivating.. A person's life captured so real.. Go for it..

full of hard words....really you need even a dictianary as well

really nice and interesting book..but full of hard words.....i mean i literally had to keep dictianary...whole time with me while reading this book....i would say one thing...meena kumari..herself diidnt knew english...the book is only well read ,,enjoyed and understood when it has got a very simple english ...which any person can understand...
READ MORE

excellent read .. comprehensive information about one of the greatest actor of Indian cinema
READ MORE