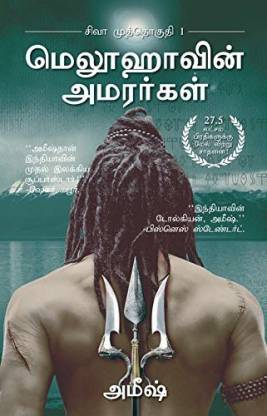 The Immortals of Meluha, by Amish Tripathi, is a captivating story of a great empire called Meluha and its saviour, Shiva, a tribal leader pictured as an avatar of Lord Shiva by the people of Meluha. Here, it is translated into Tamil with the title Meluvavin Amarargal.

Meluha, a land ruled by Suryavanshis, is a strong empire founded by Lord Rama. A flourishing empire blessed with unlimited natural resources and devoted citizens has everything going right until the attacks from Chandravanshis catches them off guard. In a very brave attempt at delivering mythological stories as vibrant fantasies, Amish has added an element of thrill to those legends. Here, in The Immortals of Meluha, Shiva, a fierce soldier from the foothills of the Himalayas in Tibet, gets invited by Daksha, the king of Suryavanshis, to lead their warriors in order to defend their holy land from the enemies. In one of the most scintillating mythological fantasies written in the history of Indian literature, Amish paints an unforgettable picture of Shiva, as a tribal leader who goes on to decimate the opposition.

Series Reading Order: The Immortals of Meluha, The Secret of the Nagas, and The Oath of the Vayuputra.

Apart from the Indian movie rights sold to Dharma Productions, the international movie rights to The Immortals of Meluha are under discussion.

Amish Tripathi has a degree from the Indian Institute of Management, Calcutta. But after becoming a full-time writer, Amish has made history in Indian literature through his mythological fantasies that are amazingly blended with constant exposure on philosophical attributes of our mythological characters. His books have sold more than a staggering 1.7 million copies, making him a living legend in the world of Indian literature.

it was even good to read in tamil

i read this book in english and even in tamil , i often used dictionary to see the meaning of some words ,

so i didnt get the full feel what other people got ,

so bought it tamil and it was good , nice translation

Very good book in Tamil.........Awaiting Secert of nagas and Oath of vayuputras in TAMIL.
Promt delivery by Flipkart as usual...
READ MORE

Amazing Book in my life

When i know the English version of Shiva trilogy from that day i search the Tamil version of these Trilogy books, this is good beginning.. from Immortals of Meluha(Tamil), Lot of Tamil people also wants these other two versions. we hope and waiting for Secret of Nagas and Oath of Vayuputhras
READ MORE

if u love shiva, please dont buy this book

Yes, This author telling that, shiva doesnt not know anything in the world. he is wondering the pipe system while he going new country. like that more dumb concepts. This book series are famous becoz of just over adv.
READ MORE

Received in time, price is higher than english version, but story is amazing
READ MORE

Awesome book...but not the same experience as in english

First of all its an awesome book which is neatly narrated in tamil as well. But still feels the original is better.

The paper quality is bad ( 1 star minus)

Overall satisfied with the story the way its written and translated in tamil.

No expectation, when i start to read the book,,after 10 minutes i don't want to close the book till complete the last page. Though the story is imaginary but really hats off to the author for co-related the history and bring it in the interesting format. Also translation is too good. This is worth for spending your time (more than money) on this book.
READ MORE

1
1
Permalink
Report Abuse
+
All 59 reviews
Have doubts regarding this product?
Safe and Secure Payments.Easy returns.100% Authentic products.
You might be interested in