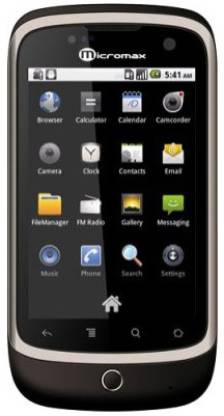 Description
The Micromax A70 is the successor to the Andro A60. Compared to it's older sibling, the A70 boasts of better screen resolution, higher megapixel camera and an upgraded OS. The A70 runs Android v2.2 (Froyo) OS and brings in Wi-Fi tethering and easy notification bar access to wireless radios. A 600 MHz processor powers the A70, which allows it to handle much of the apps sans any noticeable lag.

The Micromax A70 houses a 5 megapixel camera on the rear and a VGA camera on the front. The handset sports a 3.2 inch capacitive touch screen that packs 320 x 480 pixels which renders it compatible with almost all common Android apps. The Micromax A70's body is reminiscent of the HTC Desire, albeit with a silver banding on the edges.

The phone weighs 85 g which should make it one of the lightest handset amongst the entry-level Android smartphones. The built-in accelerometer takes care of auto-orienation while the proximity sensor switches off the display when the phone is held close to your face during a call.

The Micromax A70 features a multi-format music player that plays MP3, AMR, AAC, AAC+ and EAAC+ formats so you don't have to deal with hassle of file conversions. The supported video formats include MPEG4, H.263 and H.264. The built-in FM radio in the phone requires the 3.5 mm headset to be connected and supports multiple station preset.

The Micromax A70 is powered by a 1450 mAh battery that gives a talktime of 4 hours. The phone can go unplugged on standby mode for up to 168 hours. The internal memory of 160 MB can be expanded up to 32 GB with a microSD card.

The A70 is preloaded with Opera Mini web browser and can access the Internet through GPRS, EDGE, 3G and Wi-Fi networks. The device is preloaded with M!-Apps, Micromax's recently launched app store, where you can select apps that are optimised for the device. The built-in A-GPS receiver in the A70 gives you turn-by-turn walking and driving directions.

I bought this phone and been using for last week. I have done various experiments on this phone.

First of all Micromax would be able to loose the tag of being a cheap phone maker after this phone. The phone's build quality is excellent and it feels good when you handle it. I don't know why micromax is not publicizing this phone, bcos when it launched A60 there were ads everywhere newspapers, radio, tv, etc.

Initially I was confused about buying this phone but after iGyaan review I ordered i...
READ MORE

If you want everything at a low price.

If you are looking for a smart phone, Micromax A70 will definitely provide the best value for your money.

The build quality seems to be excellent, and looks eye popping in Cocoa Brown colour (like Dark Chocolate). Contrary to what Micromax is popular for, it is NOT a dual SIM phone.

Processor/GPU:
This is powered by a 600 MHz ARMv6 processor, 256 MB RAM, Adreno 200 GPU along with Qulacomm chipset. All of this is fairly enough to run the Android OS together with more than a dozen of apps wit...
READ MORE

A70 is a very good mobile for 7500...the battery of A70 is good,just u hav to optimize ur mobile..
A70 battery improvement & optimization tips...
1>always keep ur mobile switch off during charging
2>use fast reboot app...when u start ur mobile u will see android os has opened lots of unnecessary apps,they kill ur ram & battery,even mobile guard app cant kill all this apps...so use fast reboot app..really a light app & very useful..really saves a lot of ram & battery...i use both fast reboot a...
READ MORE

i am a regular user of ebay india, and i usually buy every smaal to big thing from ebay india..........let me tell you about my first experience of buying from flipkart.........i was really impressed the way flipkart send theitem and that too very fast.their promise of fast delivery meke me to write that now i am HAPPILY SHIFTING FROM EBAY INDIA TO FLIPKART AS I HAVE MORE TRUST IN FLIPKART THEN EBAY AS THEIR EVERY ITEM IS BRANDED WITH ORIGINAL BILL which ebay provides very rarely.i ordered ...
READ MORE

Micromax A 70 is a descent buy at 7500 bucks. But improvement is needed at the camera part which boasts to be of 5 MP. A Nokia mobile with 2 MP camera gives better quality pictures. There is no LED flash and the pictures have a yellowish tinge. Battery life is also not much and I have to charge it atleast 2 times a day. R
READ MORE

i have shopped this cell from flipkart itself. very nice service, got the piece in 2 days.
micromax has surprised me with this phone. its very nice phone, dont go by the company name. features are more compared to mobiles of other brand in same range.
1st of all, it looks awesome! display resolution is very fine, unlike pixelated screen of samsung fit.
all features are running decently,, though some lags are there (rarely)
cons:
battery backup is less
front cam not used in skype
cannot upgrad...
READ MORE

i have purchased this last year in flipkart only. from the day 1. bluetooth is not functioning well. so i installed 3rd party appfor that.2months back motherboard is gone, i gave it in service centre which is the only one ih=n hyderabad. they returned my mobile after 1 month, by that time warranty is also expired.Now i realized that better go for branded items like Nokia, samsung,sony since they have number of service centres and better servicing will be there. now i decided like whatever ele...
READ MORE

The delivery was well before the stipulated date. Great work flipkart.
READ MORE

Well You say that your friend have said that. Didi you do any research of your own. World wide 1.5 SAR is considered fine.
MAX SAR allowed for,
USA : is 1.6
UK : is 2.0

Each phone need to receive FCC certification before it could be sold. And is the phone is being sold, it is certified.

How about below figures,

And Last but not the lea...
READ MORE

Sir I have got the best product in the best price.its really enjoyble to have android phone.micromax has alreday uploaded many useful apps.Design of the set is beautiful.Little battery problem is there. but i can understand the limitation.I can not run a laptop more than a hour on battery then how a Android phone can have prolong battery runnuing with many application simultaniously.
READ MORE