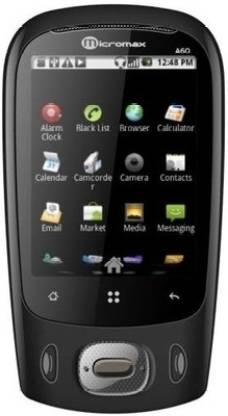 Description
The Micromax Andro A60 is a 3G phone that runs the stock Android v2.1 (Eclair) operating system. The handset offers the usual bag of Android goodies like enhanced web browsing via the Webkit browser. The Andro is powered by a 600 MHz processor and runs CPU intensive apps like Speed Forge 3D without any hassle.

The 3.2 megapixel camera shoots fairly good snaps in daylight, with above average detail and color tone accuracy. The mobile can also record videos and allows users to directly share it on YouTube, Facebook and Twitter.

The A60 sports a compact streamlined chassis that allows for an ergonomic grip whilst rendering it extremely portable. Below the display are the three touch sensitive buttons, a D pad and two more buttons which can be customized for specific functions. The Micromax 3G mobile is loaded with an accelerometer for auto-orientation.

The A60 comes with 150 MB internal memory which can be expanded up to 32 GB via microSD card. The Micromax Andro is powered by a Li-Ion 1280 mAh battery and gives a talktime of 4 hours with 240 hours of standby.

Worth for what you pay

I purchased this phone couple of months back and wanted to post a review from long. One should buy this phone only if s/he likes to get a gist of android, as we cant expect the great performance on this ...
READ MORE

I will warn everyone not to buy this, its totally not the worth,
if you want to get android phones buy a bit expensive ones but not this!

i bot this product on february 2012, i was happy with flipkarts delivery service, but after a week of using it i repeat after a week of using this the touchscreen was kaboom ! the touchscreen simply dint work, the headphones stopped working too! i was super annoyed, i took it to the services center which is so far from my place, they told me i would get a...
READ MORE

Very nice phone and better services, It has good performance
better graphics, good looking and very handy phone, I like this Phone very much. I got better price than market.This better for those that want low price phone. I like its motion sensor while playing games.
READ MORE

USING THIS PHONE FOR LAST 2 MONTHS -FROM FLIPKART.. OK PHONE. THE SCREEN IS A PROB

HI guys.. i bought this phone from flipkart and using the same from last 2 months. So far its working fine except a small screen problem.

Good part -:A phone with GPS,3G, Touchscreen, Bluetooth, WIFI-all in one at such cheap price is excellent. All the above services works well.

Bad news: THe resistible touch screen sucks big time. Cant type a message easily. If you are kindda person who sends lots of messages, trust me -this is not the phone you need. You press S, p gets selected.. WOw -a...
READ MORE

Good Phone.Depends on how you use it.

By Checking all the reviews, i came to a conclusion that it's all depends on how you use your mobile matters the most and don't expect everything at this price. For my usage this phone is the best basic android phone, I play games, surf internet(Edge network but not 3G), watch movies and voice calls. Battery life in standby mode is two days. And most of you try to encourage local brands and don't just blindly trust multinational brands, they also have their drawbacks.
READ MORE

Awesome Android Phone At this Budget ...Lots Of feature and Good Touch Screen ..Wi-fi and GPS is Very Useful Features Of the Phone..it is Lowest and good Budget Android Phone ..lOts of other feature ..like this phone very much at this low cost ..get the delivery within 2 days ...
READ MORE

I've just bought the micromax andro a60, and so far I am very pleased with it. it has great sound quality & display quality is awesome.The battery back up of this phone is also good.Nice android phone at this price. Buy it and experience great fun.
READ MORE

FEATURES NOT SO GOOD

ANDROID mobile in this price band is not very difficult to get from other brands, I bought this A60 few days back, but didnot enjoyed much. Camera feature claimed is 3.2 Mega pixels but the result is worst than VGA camera.

My first android was really my first one

Love u masterpiece. RIP
It was a nice one, it always stood up in front of other mobiles due to its durability. The cunning piece of hardware with powerful packing of apps.
READ MORE

I bought this phone in 2011 Jan, its Nov 2013 almost two years and 10 months and this phone still works without any problems. I had to get it to the service center once for minor repairs, that is all. :)
I use it as a secondary phone, as it fits in the pocket very well and with wifi, internet connection off (killing not used apps) it gives 24 hours battery life. With wifi and apps it will only last for 2 hours. :(
READ MORE