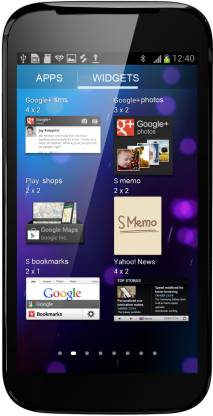 Micromax has brought out another budget smartphone for the burgeoning smartphone market and loaded this mobile with a number of useful features. The phone is run on the clever Android v4.0 (Ice Cream Sandwich) OS and is backed up by a 1 GHz Scorpion Processor as well as 512 MB of RAM. These high-end features ensure that applications on the phone are run in a smooth manner.

The display of the Micromax Superfone Canvas A100 is an enlarged 5-inch Touchscreen which provides an FWVGA resolution of 480 x 854 pixels. The device comes with a dual SIM (GSM + GSM) functionality for users who require more than a single SIM card for home and work purposes.

This Micromax phone features an efficient 5 megapixel primary camera which doubles up to record video as well. The camera comes with useful tools like Flash Light, Night Vision, Brightness and a 4x Zoom function. The secondary 0.3 megapixel camera allows the user to conduct video calls easily.

The Micromax Superfone Canvas A100 is a sleek phone with a large rectangular frame and curved edges. The phone comes in dimensions of 72.6 x 142.2 x 11.9 mm which makes it quite a slim device. The phone weighs in at a hefty 168 g which makes it a thin but slightly heavy device. The G-sensor serves to rotate the display according to the orientation in which the phone is held.

The device is capable of storing a large part of the user’s music and video collection as it comes with ample memory. The phone contains an internal memory of 4 GB which can be boosted by up to 32 GB using a micro SD card. The Micromax Superfone Canvas A100 is powered by a 2000 mAh Li-Ion battery which promises to provide the user with a talktime of 5 hours when used on the 2G network.

This Micromax phone is capable of keeping the user connected to the internet at work, home or on the move. It comes packed with GPRS and EDGE technology which can keep the user connected to the internet via the 2G network. For a faster online browsing experience the user can use the 3G functionality on the device. Additionally, the device is capable of accessing a wireless network as the phone is WiFi capable. Files and documents can be exchanged using the micro USB port or the Bluetooth functionality on the device. The device is also an excellent navigation aid in the form of Google Maps which uses GPS support.

The Micromax Superfone Canvas A100 is capable of keeping the user entertained through the multiple features it possesses. The device comes with a music player, video player and an FM radio which can record music off the user’s favourite radio station.

Other useful features on the phone include Video Sharing Support, Power Saver, Webcam and IP dialling. Social networking Apps like Facebook, WhatsApp and Instant Messaging come bundled into the device so the user can keep in touch with friends and family while on the move.

I just had purchased this phablet from local market as it was not available on flipkart, so the thing about this phablet are that like

Pros
1) Nice 5 inch 5 multitouch capacitive touchscreen which is very responsive to the touch.

2) Has dual camera primary camera of 5 MP with LED flash & secondary camera with 0.3 VGA camera, camera quality is good in normal day light but also it has night mode functionality.

I just had purchased this phablet
from local market as it was not
available on flipkart,
then i just start with the cons of this device
cons
1) mmax said that it has 4 gb int memory&512 mb ram but these r available for user is 1.37 gb &380 mb respectively dont wory it is much for normal use
2)single core procesor
3)have no hardware buttons only have touch screen button...
READ MORE

Great but wait to fill stock

I have purchased the Micromax A100 and Micromax A45 from retail shop 2 days before. I was charged 1000 rupees more per piece due to stock unavailability. If you trust Micromax, then this phone will definitely suits in your hand.

Althought i am writing lot of cons i absolutely loved the product just becoz its a complete package...and u can never get this much for merely 9500.

while seeing other smart phones in the market you will never feel that your ph. is not capable of doing the stuff that other high end smart phones can do but obviously there are some limitations.

1 Chinese yuan = 8.5494 Indian rupees
1600 Chinese Yuan =13664 Indian rupees
Micromax giving us this much cheaper than this.
It is a god product in its price range.
But ics is a very heavy os why google developed jelly bean , its called project butter. 512 mb of ram and 1 GHz processor is not sufficient for ics. if this model has android 2.3 gb instead of ics it should be a better product.
READ MORE

AWESOME PHONE IN THIS PRICE TAG OF 10K

Well, I am not at all a tech savvy person but went for this phone after consulting with many and going through various people who are already using this. My comments are:

1. This is surely a head turner as people are thinking it as some high end device

2. I am not facing any hitches as I could see in the reviews here

3. Battery life is very much satisfactory

4. I am not into games, sot sure about that issue

5. It has got a very bright screen that is highly responsive towards the touches
...
READ MORE

Really good for the money what we pay

Bought from other shop as flipkart was out of stock. I am using it for a week+ now.
pro:
battery,screen, response, call quality, build(looks plastic but ok),3G/Wifi speed, camera( not DSLR quality :) but ok )
con:
Dual sim( second sim not reachable when first is in use, i may be missing something)
Power connector not easy to insert into phone
Memory- you will find need for more, but ok for regular use)

Thumbs up to Filpkart for their delivery and packaging quality. I got this phone 3 days back and here is my review concluded from last three days.

Priced at 10000 with Single Core 1 GHZ Processor, 512 RAM and Android ICS, this is an amazing product from MMX. Saved me around 30000 when compared to other high end devices.

Cant be better by any manufacturer for a dual sim option

I have purchased this phone and I am super happy with it. Initially I felt that the quality of the phone wont be upto the mark like the HTC Desire V for a dual sim android phone. This phone is fast,longer battery life,5inch screen,ICS,great graphics due to 1gz processor. This phone is costing us INR9900 which is a steel in comparison to other brands. All the phone using Android are the same. You may buy HTC,Samsung or Micromax for that matter and ICS is ICS on all. If you want a phone with an...
READ MORE

Earlier Review:
I purchased this phone on 22nd evening and i got it on 24th. Good flipkart service as usual. The phone is nice and feels sturdy. I am no phone geek so i wont go into the tech specs as they are available in detail online. As for my particular product, i am a bit suspicious of flipkart. My product came in minimum protected packaging and it had a proper seal on it, but to my surprise the mobile box seal looked like as if someone had opened it professionally. I didnt care much. W...
READ MORE