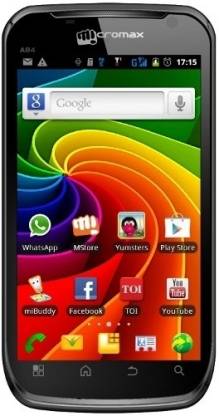 Micromax has brought about another budget smartphone for the burgeoning smartphone market with the Micromax Superfone Elite A84. The phone comes in a bar form and is run on the effective Android v2.3 (Gingerbread) OS. The operating software is backed up by a hefty 1 GHz processor which ensures the smooth running of applications on the device.

The display of this micromax smartphone is a 3.98-inch capacitive touchscreen which provides a WVGA resolution of 480 x 800 pixels. The phone also comes with a dual SIM (GSM + GSM) functionality for users who require separate SIM cards for work and personal use.

The phone also comes with a powerful 5 megapixel primary camera which doubles up to record video as well. The camera is backed up by an LED flash for clicking pictures at night while also featuring useful tools like Night mode and Geo-tagging. The device contains a 0.3 megapixel secondary camera to conduct video calling easily.

The Micromax Superfone Elite A84 is a stylishly designed device and comes in dimensions of 65 x 125 x 10.6 mm which makes the phone quite a slim device. The screen of the phone comes with an IPS panel for higher quality display as well as an Accelerometer which serves to rotate the display according to the orientation in which the phone is held.

This Micromax mobile comes with an expandable memory card slot which can boost the memory on the phone by up to 32 GB using a micro SD card, thus being able to carry a large part of the user's music and video collection. The device is powered by a 1630 mAh Li-Ion battery which promises to provide the user a talktime of up to 4 hours when used on the 2G network. On standby, the phone will run for up to 150 hours.

The device is capable of keeping the user connected from work, home or on the move as it comes with a plethora of connectivity features. The device possesses GPRS and EDGE technology which can keep the user connected to the internet via the 2G network. The phone also comes with HSDPA and HSUPA technology which provide for higher data transfer rates over the 3G network. The Micromax Superfone Elite A84 is also capable of connecting to a wireless network as the device is WiFi capable. Files and documents can also be transferred from the device using the micro USB port or the Bluetooth functionality of the phone. The device also comes in handy as a navigation aid in the form of Google Maps which uses GPS support.

The phone is an excellent entertainment companion as it possesses a music player and a video player that allow the user to indulge in their favourite music or videos which can be stored on the micro SD card.

Social networking Apps like Facebook and WhatsApp allow the user to stay in touch with friends and family on the move. Other useful Apps that this phone comes with include Youtube, the Yumsters game and access to the Android Market which combine with the other features to make the Micromax Superfone Elite A84 a highly useful device.

Its the best phone in android because as it is having
1. It has capacitive screen with IPS technology
(which u find in Apple or HTC)
2. 1 GHZ processor
3. Li-Ion, 1630 mAh{Best battery you ever fing in touch screen}

4. Video calling capability which comes in mobile with high price
5. 5 mp camera with flash
6. Dual sim
..
.
.\
its best phoine released by micromax till not i beats all bigger companies in price and performance
READ MORE

No point of buying this one when A100

A100 specs are likely better than this phone. In case of the this one is 2.3 where a100 is 4.0 android. In case of cpu and ram both r same. In case of screen a100 is larger but ppi can be a lil better for this one. Both have the same camera hardware, but os 4.0 have better and improved camera controls, thus a100's camera is better. Finally in case of looks definitely a100 will have my vote. If your planning to buy a micromax android this season, at a budget of 10,000 then a100 will be a good ...
READ MORE

Buy the A100 Instead for the same price.

For the same price, you get a better OS and more screen real-estate.

I have nothing against this phone, but if the prices of the 2 are exactly the same, better to buy the A100.

micromax a84 is the first buying product for me.

this is realy worst product which was given by flipkart ,nd the result of camera is very awesome , those guy who want to buy mobile for camera than they shold buy this product because camera result is better than a89... touchrespose is very nice nd ulty... i frankly suggest all of you to buy this worthy product.
READ MORE

The product is very good but only con is less internal memory otherwise great product.Earphones are awesome quality.And also price in flipkart is the lowest.

I recommend buying this product if you can satisfy with android 2.3.
READ MORE

Cost effective but with limitations

7k and almost all the features of a good smartfone :)
Pros:
Awesome and smooth performance.

But in this cost its the best mobile and that too Indian Brand.
READ MORE

0
0
Permalink
Report Abuse
+
All 23 reviews
Have doubts regarding this product?
Safe and Secure Payments.Easy returns.100% Authentic products.
Back to top