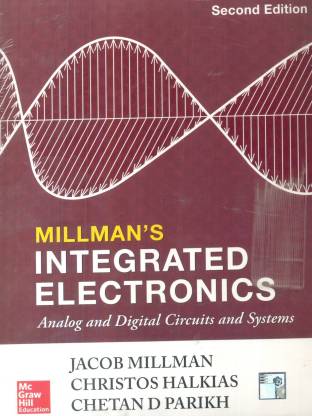 Millman's Integrated Electronics: Analog And Digital Circuits And Systems is one of the most popular books on electronic circuits, and this revised and updated edition was published by Tata Mcgraw Hill Education Private Limited in 2011.

Written primarily for students who want to pursue and study electronic engineering, Millman's Integrated Electronics: Analog And Digital Circuits And Systems is a helpful and comprehensive guide. First published almost four decades ago, this edition has been adapted to inculcate modern changes and developments in electronics, and has been thoroughly revised.

The book commences with a preface to this new and adapted edition. Providing recent data on technology and electronic circuits, the book is divided into nineteen comprehensive chapters. Topics like Transport Phenomena in Semiconductors, Field Effect Transistor, Stability and Oscillators and Power Circuits and Systems are discussed in great detail. An entire chapter has been dedicated to multistage and feedback amplifiers as well. Each chapter culminates in a set of practice questions for the students.

Additionally, the text contains 574 review questions, 242 solved examples, 170 objective questions and 712 homework circuit-simulation problems. A list of reference symbols is also provided at the start of the book to aid the reader’s comprehension. The book culminates with two appendices, which address different conversion factors, probable values of general physical constants, and prefixes.

Implementing enhanced pedagogy, Millman's Integrated Electronics: Analog And Digital Circuits And Systems is an in-depth guide for those interested in electronic circuits and technology and is designed to help the reader get a firm grasp on the subject.

Jacob Millman, born in 1911, was a Ukrainian author and professor of Electrical Engineering.

He has authored Microelectronics, Integrated Electronics: Analog And Digital Circuits And Systems, Pulse, Digital and Switching Waveforms, and Electronic Devices and Circuits.

After procuring a doctoral degree from the MIT in 1935, he went on to teach Electrical Engineering at Columbia University from 1951 to 1975. He is credited with the invention of Millman’s Theorem, or the parallel generator theorem. He was the recipient of the 1970 IEEE Education Medal, and passed away in Florida in 1991.

Christos Halkias is an American author and professor.

He has authored books like Electronic Fundamentals and Applications: For Engineers and Scientists.

Halkias studied at the City College of New York and procured a doctorate in Electrical Engineering. With almost three decades of teaching expertise, he has taught at colleges like the City College of New York, Columbia University and National Technical University of Athens. He was also a board member of Intrasoft SA, the Information Society Technologies Advisory Board and the Greek National Research Advisory.

Chetan D. Parikh is an Indian author and associate professor. 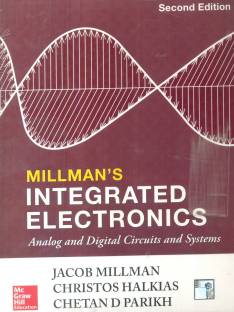 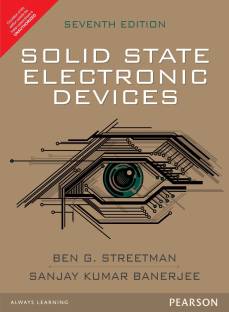 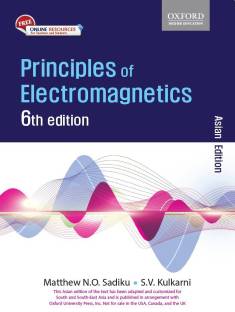 if you really want to hone your skill on small signal analysis and other imp concepts of analog electronics .. then go for it .. h parameter is explained clearly and feedback concept has be given in detail .. but for numerical solving go for rashid's microelectronics book..the most imp thing about this book is the design of contents .. this book has been written in a top to bottom manner for example BJT dc biasing is given after BJT ac analysis.. .. over all this book is the bible of analog e...
READ MORE

must for technical enthusiasts and engineers..!!

looking to broaden and specialize in electronics.!!! this is the book to go for...every topic is clearly mentioned in full detail ..
Plz note that this book may not be easy to read for beginners as this book has deep concepts integrated along throughout the book.. but after reading through this book u can be sure to face any question in theory or any entrance exam like GATE or IES easily..!!
PROS:
transistor related topics such as small signal analysis and large signal analysis have been exp...
READ MORE

The service from Flipkart is truely amazing and even better than what I expected.
The delivery was very fast.
The packaging was great and the book was in excellent condition.
I would love to give 5 out of 5 rating in every aspect.
READ MORE

good book for physicists but not for engineers. but if anyone wishes to have a detailed knowledge of diodes,bjt, opamps, etc., then this is a good book. i am an electrical engineering student and i did't found the book useful before exams.
READ MORE

If you want to master in analog electronics, this one is the must pick for you. Concepts are so clearly depicted in the lucid text, extremely impressive.
READ MORE

the book is very good, each concepts are explained nicely with neat diagrams , quality of the paper is good . . . A very good book for UG and various competitive exams . . . .
READ MORE

Liked the book! Gifted to a person...
READ MORE

companion for the electronic and electrical engineers

It gives some information about digital and some about solid state, but none are fully covered
READ MORE