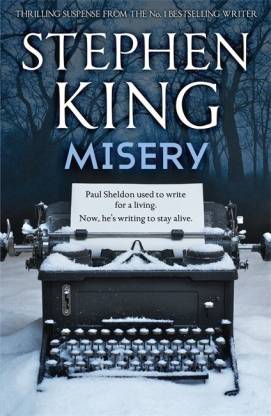 When a writer decides to kill off the heroine of his bestselling fiction series, an unhappy fan kidnaps him and tries to show him the error of his ways, no matter what the price. Misery is a horror novel by Stephen King.

Paul Sheldon had enough of Misery Chastain. He killed her off in his next novel, hoping to start a new series soon. However, he had forgotten that Misery was the character who made him rich. She was why he had become famous. Annie Wilkes, a nurse and his Number One Fan, realized that Paul Sheldon needed a reminder. He needed to understand that Misery needed to live. She was willing to go to any lengths to convince him of that. To bring Misery back, she was willing to show Paul what misery truly means.

Stephen King is an American horror-fiction writer. His books, Carrie, The Stand and The Shining, have rocketed him to fame and fortune. He has also written under the pseudonym of Richard Bachman.

"Paul Sheldon used to write for a living, now, he is writing to stay alive."

Stephen King is a horror novelist and horror doesn't always come from the gothic stories or ghosts in the mansion. Sometimes, it comes from real situations, situations who haunts you and scares you more than any ghost ever can. And being kidnapped by your #1 fan is a concern for every writer.

Paul Sheldon (author of novels Misery) rescued from an accident by Annie, a deranged fan who loves the work of Paul. After s...
READ MORE

Book was delivered in the best condition. I bought it at very reasonable price too. Delivery before 24 hours of placing the order. Happy with it!
READ MORE

a wonderfully and intelligently crafter book

The book flabbergasts you at innumerable tuens and gets better and better with each page. The delivery was punctual and the package was decent which is very impressive as its flipkart. But there was no bookmark given that i ordered three books at once and they all came in one package incliding this book.
READ MORE

Not unlike his other books, Misery is a wonderful read.

A popular author has been hurt in an accident and he has been kidnapped by a crazed fan who happens to be a tall forty year old lady. She is stranger than fiction.

It is well book as a horror and thriller by Stephen King❣️
Well binding and page is so much perfect.......
READ MORE

The book was in perfect condition... But Flipkart should work on there packing...
READ MORE

Really enjoyed the book, it was a good read..
READ MORE