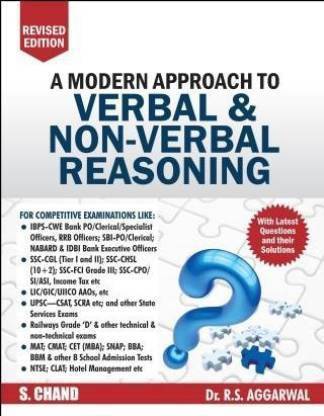 Published in the year 2012, A Modern Approach To Verbal & Non-Verbal Reasoning is a book that is geared towards enabling its readers to better their reasoning abilities and crack this section in competitive examinations.

This book, A Modern Approach To Verbal & Non-Verbal Reasoning, has been written by one of the most highly experienced authors in the arena of educational books.

This book has been divided into two parts, each of which covers several important topics. The first part of this book, Verbal Reasoning, has two sections. Some of the chapters covered in the first section, General Mental Ability, include Verification Of Truth Of The Statement, Assertion And Reason, Alpha Numeric Sequence Puzzle, Direction Sense Test, Series Completion, Inserting The Missing Character, Logical Sequence Of Words, and Logical Venn Diagrams. In the second section, Logical Deduction, the chapters include Cause And Effect Reasoning, Statement-Conclusions, Theme Detection, Statement-Arguments, Deriving Conclusions From Passages, Logic, Statement-Assumptions, and Statement-Course Of Action.

In the second part, Non-verbal Reasoning, some of the chapters include Construction Of Squares And Triangles, Classification, Figure Formation & Analysis, Series, Completion Of Incomplete Pattern, Paper Folding, Analogy, Analytical Reasoning, Cubes And Dice, and Spotting Out The Embedded Figures.

A Modern Approach To Verbal & Non-Verbal Reasoning is of great use to students preparing for a number of entrance examinations, whether it be for an MBA or for a job in the Civil Services. It will also be useful for students writing exams to get jobs in banks, the tax department and the railway department. One of the primary reasons as to why students should use this book is that it contains a great deal of practice questions, some of which come with the hints needed for solving problems. The book also contains solved problems.

R. S. Aggarwal is a leading author in the arena of publishing reference books. Apart from this book, Aggarwal has written several other educational books, and they include Senior Secondary School Mathematics For Class 11, Quick Learning Objective General English, A Modern Approach To Logical Reasoning, Arithmetic For Competitive Examinations, and A Comprehensive Guide To MCA Entrance Examination.

Aggarwal was born on the 2nd of January, 1946, near Delhi. He holds a degree from Kirori Mal College, Delhi, and a Master’s degree in Mathematics. Aggarwal also attended Delhi University, where he completed his doctorate degree. Till date, he has published more than 75 educational books, catering to the needs of students attending kindergarten, and those preparing for entrance tests into various colleges. He has worked for MMH College, Ghaziabad, in the position of a reader. He retired in 2003. 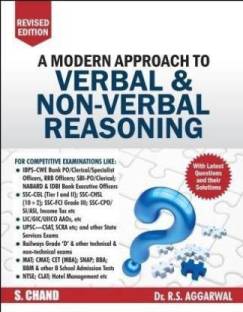 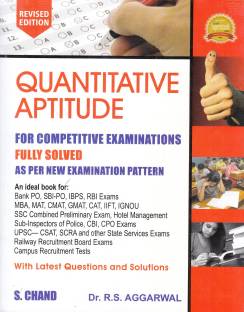 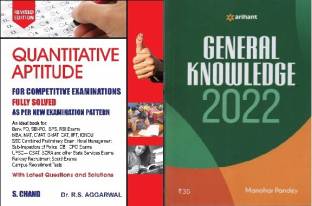 It got delivered at my place in a little more than 48 hrs!!
First thing you'll notice about the book is that its so heavy! haha .. Jokes apart. Its a decent book for preparing for competitive exams & building logical & reasoning skills and not to the forget the Verbal part which is fine. Its like an All-in-One with everything in it. Not excellent but fair enough!
Adios..
READ MORE

Very nice book. I hope will help me in my study. Received at good condition.
Contents is good and helpful.
READ MORE

Excellent Book for all types of examinees

The first time, I purchased this book (Non-Verbal) in the year 1992 and I loved the quality of questions it had. Later, I purchased the verbal one also. So far, I have purchased not less than 10 books and gifted to the nears and dears. Very good book for all who are appearing for examination where, mental ability or logical skill is asked. The collection of questions are simply superb. It is excellent for those who use this book for the type of questions and the way, the question can be asked...
READ MORE

Any doubts,any questions about this book let them be there in your mind & have faith & trust on the reviews & courage to click the order button......when the book arrives i am sure u wont have any doubts......this book suits all considering any stream,field,any competitive exam,all age groups be it a school going kid preparing for Olympiads & competitive exams or be it a college graduate preparing for MBA.......it has solved examples accompanied by explanations....u dont need any other book f...
READ MORE

Best for Learning and practicing BUT Avoid Buying it here.

1. Book is costly. Check the website of Chand Publishers and they offer you at half price even after delivery charge. Check once please.
2. Packaging was the worst. Book will be covered with just a polythene cover and nothing else. I received on teared condition but it was pasted by myself as it was manageable.
3. Paper is not that bad but not good too. It will be similar to High quality newspaper.
4. Explanations are very short for beginners b...
READ MORE

very good condition of book ... thank you Flipkart for this outstanding discount and so fast delivery within 20 hours .... printing quality of book also genuine...
buy this without any hesitation.......hurry....
READ MORE

I have solved the entire book. In my views it is very good book as it will develop the intuition to crack the questions because it contains a very wide variety of questions of sufficient number.
But the basic PROBLEM which i have found is that questions are not being UPDATED......... the latest questions which one can find in this book is of year 2005... so this books needs an UPDATION or REVISED EDITION so as to cover the wide plethora of question of different competitive exams.
READ MORE

Everything is quite good. At first concepts are given, then solved examples and then exercises with enough questions and then solutions to those exercise, a perfect combination to learn in a proper way. But 3 stars given because it's an old edition for 2018's exams, you won't get questions that came in 18,19 exams.
READ MORE