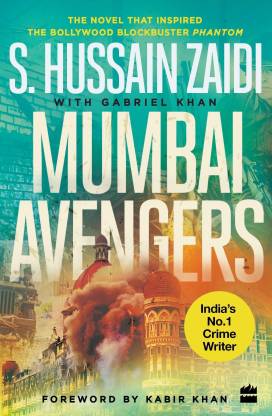 Mumbai Avengers, by S. Hussain Zaidi with Gabriel Khan, is a fast-paced thriller with an intricate plot and jaw-dropping twists. As Waris and his team navigate untold dangers towards a nail-biting climax, will Mumbai be finally avenged?

Years after the 26/11 Mumbai tragedy, India still seeks justice. The terrorists who planned it have disappeared and Mumbai seethes with fury. All that the Indian government has accomplished is drafting counter-terrorism committees. But one man will stop at nothing in his quest to avenge the dastardly act. Retired Lt. Gen. Syed Ali Waris of the Indian army comes up with a covert mission with a team of brave agents - a smart policeman, a suave tech expert, a cerebral scientist, and two battle-hardened army officers. They strike like lightning although they are followed by the Pakistani army and the ISI. From Sweden to Istanbul, through Dubai, Pakistan and Singapore, they destroy the perpetrators with an undeterred focus, concealing the deaths as natural ones, to save the Indian government from political embarrassment.

S. Hussain Zaidi a Mumbai based journalist, A veteran of investigative, crime and terror reporting in the media. He has worked for the Asian Age, Mumbai Mirror, Mid Day and Indian Express. His previous books include best-sellers like Black Friday, Mafia Queens of Mumbai, Dongri to Dubai and Byculla to Bangkok. He is also associate producer for the HBO Movie, Terror in Mumbai, based on the 26/11 terror strikes. He lives with his family in Mumbai.

I was blown off after reading Hussain Zaidi's book "Dongri to Dubai". I had expected a book in similar lines with a lot of suspense and untold facts however this book turned out to be nothing like that which disappointed me a bit. The only good thing about the book is the pace. It goes really fast and some times you do not feel like putting it down but the end is very predictable and similar to a Bollywood movie.
READ MORE

Thrilling and scintillating. Makes us wish all of it were real
READ MORE

Horrible product quality. If not gluing was there purpose, they did fine job using the least amount of glue possible or even less. You can literally see through the spine of the book.
READ MORE