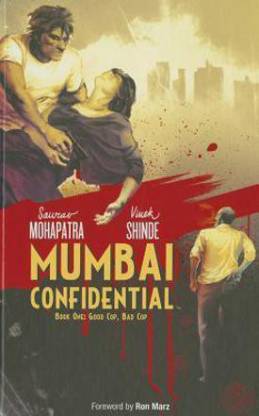 From writer Saurav Mohapatra (Witchblade, Devi) and artist Vivek Shinde (Snake Woman, Project: Kalki) comes a hard-boiled tale of crime, punishment, and redemption in the seedy underbelly of Mumbai. Five years ago, Arjun Kadam used to be a cop, a rising star in the ranks of the Mumbai Encounter Squad - an elite unit tasked by the powers-that-be to carry out extrajudicial executions of notorious gangsters. But the death of his pregnant wife at childbirth derailed his life and set him off on a spiral of depression and drug addiction, a pale shadow of his former self. When Kadam is the victim of a hit-and-run that also claims the life of a street urchin, he goes into coma for a month. Upon awakening, he finds a new sense of purpose and pursues the investigation, taking him on a journey through the deep, dark heart of Mumbai - from the glitzy tinsel of Bollywood, to the dank depths of the Mumbai Underworld, where the line between the police and the criminals has been blurred beyond recognition by his ex-colleagues on the Encounter Squad, who are now de-facto gangsters in uniform, running the very same extortion rackets they were tasked to eradicate. Obsessed with his mission, Kadam sets off a desperate gambit of deadly intrigue and deception that pits him against the very machine of violence and corruption he once helped create.

Mumbai Confidential
book 1
good cop, bad cop
My review
.
One of its own kind of graphic novel I've never seen before.
From story to its art work. every piece of work of this book is very unique.
We usually read any comic book or a graphic novel which's story generally rotate around any specific individual. But this books takes graphic novels to a another level.
if i say about the story then from start to end it felt like watching a Hindi Bollywood gangster movie like shootout at lokhandwala o...
READ MORE