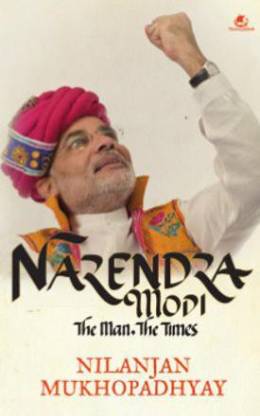 Narendra Modi: The Man, The Times presents the author’s perspective of Narendra Modi and the events and decisions that govern his life.

Narendra Modi: The Man, The Times explores the intriguing personality of Narendra Modi, the man who seems to be in contention to represent BJP in the race for the post of the next Prime Minister of India. Narendra Modi is a name that can always be counted on to raise passions. He is either demonized or admired, vilified or worshipped. Each camp gets heated as it puts forward its own arguments to support its views.

Narendra Modi: The Man, The Times is one more such attempt. The author traces Modi’s life from his young days, to his initiation into the RSS and his gradual rise to his current status. The author travelled throughout Gujarat and interviewed many people who are directly or indirectly related in some way to Modi. He has gathered information about Modi’s childhood days, his taste in clothing, and his initial days in the RSS and BJP as a junior member.

As a young child, he supplemented his father’s income by selling tea, and started in politics by working for a local leader, taking part in rallies, shouting slogans, and waving flags. The book says he gave up his family and wife to further his political ambitions. It cites his hardline views during the Gujarat riots as the reason for his popularity and larger than life image.

The book also goes into some details like Modi’s preferences in clothing, his distinctive kurtas which has led to a lucrative line of business selling Modi Kurtas, in the tradition of Nehru jackets. Modi also likes designer fountain pens and watches, but is a frugal diner. He is tech savvy and has a good cyber presence with Facebook and Twitter profiles.

Narendra Modi: The Man, The Times is an effort to delve into the man’s personality and character, to examine the factors that has made him who he is now. The book analyzes his government’s performance over the years and tries to explain the reasons for the conflicting views about him.

Nilanjan Mukhopadhyay is an Indian journalist.

Other books by this author are The Demolition: India At The Crossroads and Hindu-Muslim Communalism.

Nilanjan Mukhopadhyay started his career as a journalist in the 1980s. He has worked for various leading publications like The Economic Times, The Statesman, Hindustan Times, and Outlook. He also hosts a show on the government run Lok Sabha TV called A Page From History, which focuses on important historical issues. He lives near Delhi.

PLEASE DO NOT BUY THIS BOOK. P L E A S E....
THIS AUTHOR HAS BEEN PAID A LOT TO WRITE THIS BOOK, PURCHASING AND GETTING HIM MORE RICH WILL LEAD US, THE INDIANS, NOWHERE... AND PEOPLE LIKE HIM, EVERYWHERE....
THIS BOOK IS AN ANTI MODI SAGA AND IF YOU ARE ONE OF SUCH SADISTS WHO LOVES IT, JUST WATCH THE NEWS, BUYING THIS BOOK WILL EITHER WAYS (WHETHER U LOVE HIM OR HATE HIM) GET YOU NUTS
A BIG THUMBS DOWN TO THIS BOOK AND MUKHOTA-PADHYAY
READ MORE

Less of a biography, more of random ramblings

The task of a biographer who chooses to narrate the life of a living politician is very difficult. He has to stick to the subject without deviating too much and refraining from analysing the political ideology at the cost of the subject at hand. This is the reason why people read biographies. Well, this book overdoes what is not to be done at the cost of what should have been done.

It is a boring account of what the author THINKS about Modi and his politics. Complete subjectivity. I have no ...
READ MORE

One interview and he can write a biography ?

If you have read anti-modi articles which are abundant, you will need a little more patience to read this big book which tries to paint everything in Modi as 'evil' in the garb of writing his biography. The writer has not really been on the ground in Gujrarat except a brief visit for writing this biography. A classic case of arm chair detractor who wanted to please his masters:he just took some papers and selectively took the feedback of other detractors 'only' and wrote a book. Some examples...
READ MORE

Some one said...if u have to know some one, u have to talk to his critics to get complete picture ! Well it is true with this book on Narendra Modi ! Nilanjan Mukhopadhyay narrative is very gripping of a politician described by Advani as 'The most mis-understood ' and unmannerly maligned politician in the history of Independent India..". Suddenly at the end, Nilanjan remembers he is from other camp and start character assassination which could't take away knowing MODI's raise from a boy who w...
READ MORE

This book is only for Modi haters

I bought this book thinking it would discuss the most popular politician in the country in a politically neutral manner. But the writer Nilanjan Mukhopadhyay cannot hide his bias and his seething hatred for Narendra Modi, and his contempt and distatste for those members of the public who admire Modi and support BJP. If one goes by the writer's arguments, it is a sin to admire Modi or support BJP - indeed it is a crime which merits the harshest punishment. Only evil doers or morons can support...
READ MORE

this book is anti modi. the writer has left ethos and values of writing professionals to gutters. one person needs to express his neutrality in words by showing the real intent and then going on to express views which may also be negative. but in this case author has only showcased his intent to write biased remarks without study in contrast. there is freedom of speech but this kind of writing causes waste of time.
Modi seems to be a good leader and he has lot many laurels to his name and gre...
READ MORE

I have never felt like throwing a book in the garbage bin after the second chapter. But this one sure is going there. A must never read book
Narendra Modi : The man The Time by Nilanjan Mukhopadhyay

Even if I ignore the biased opinion of the writer and putting his views in the book not to mention the 'Is, I cannot ignore the fact that the book is written like a episode of Sansani. Giving a highlight and saying it will be discussed in detail after a while. Also, there is no order of events, ...
READ MORE

Congress paid for this book

I second the guy`s review here.
Its a biased book with the tilt more on being towards the modi crimes then the modi rhymes.

Baseless book!! The author is a complete loser

This author is a complete baseless guy. One who doesnt even know what a good govt is supposed to do, and calls him a journalist, I dont know about the readers, but this guy is a cronie of sonia, and congress has paid for this book.
To maligh modi, coz congress is scared of him, because the youth of india are with NaMo, and they cant control the youth uprising,.
READ MORE

100% agree with all reviews written above. I wish i had read these reviews before i purchased the book.
The book clearly gives only the opinion of the author rather than the biography of Mr. Modi.
This was one of the first books on NaMo and being a huuge fan of Modi, i bought this book.

However, the author just fills pages with some random crap and has written his experiences with people whom he spoke to in Gujarat who hate Modi.