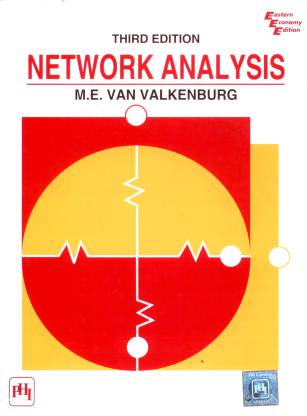 Sold Out
This item is currently out of stock
Author
Valkenburg M.E.Van
Read More
Highlights

The book Network Analysis covers a range of subjects that are considered fundamental concepts in the field of Electrical Engineering.

This book Network Analysis, covers core concepts that are faced by those are amateurs as well as intermediate in the field of electrical engineering.

The book contains explanations of the Nyquist criterion, Gauss elimination method, as well as Tellegan’s theorem. Apart from that, the book also provides the readers with information pertaining to circuit development, which is the first chapter.

There are several questions and recommended digital computer activities that can be solved by the reader and are present at the closing of each chapter. Apart from that, the reader is also provided with answers to a number of choice questions in the appendix.

Some other concepts covered in this book include the Laplace transformation, power transfer, frequency response plots, and network functions. The book also contains detailed information on core concepts such as Thevenin's and Norton’s Theorem. Concepts such as Fourier Theorem and Routh-Hurwitz criterion have also been explained thoroughly in this book.

The author of this book, M. E. Van Valkenburg, was also a renowned electrical engineer in the United States, who had authored several textbooks in the respective field.

Some of the books published by the author include Analog Filter Design, Introduction to Modern Network Synthesis, and Network Analysis: Solutions Manual. These books are extremely beneficial for students pursuing their degrees in the field of electrical engineering.

The author hailed from Utah and completed his undergraduate degree in Electrical Engineering from the University of Utah, followed by a post-graduate degree in electrical engineering from MIT in the year 1946. The author also holds a doctoral degree from Stanford University in the field of electrical engineering. He served as the Dean at the Electrical Engineering department of the University of Illinois in the year 1984. Apart from that, the author had also received several awards for his contribution to the field of Electrical Engineering. There are also two awards that are named in honour of the author, by the IEEE Education Society and UIUC. He has mentored several students during their doctoral degrees, one of them being the Dean at the Indian Institute of Technology, Madras, Prof. VGK Murthi. He passed away on the 19th of March 1997.

1.This book gives a solid foundation for the most important subject for electrical engineering students.

2.However this book alone is insufficient for the student. Use this book along with Schaums outlines of electric circuits by Edminister and Nahvi for solved problems and many more exercises.

Important: Knowing the fundamentals well requires lots of practice solving a variety of problems. Variety is important because some so called good textbooks solve lots of problems but lack in variety.
READ MORE

it is the best book i have read. each concept has been cleared starting from basics. covers almost all related subjects. problems given in exercise are of IES level. It is a Must read book for Electrical and Electronics engineers.
READ MORE

Pros:
1. Written in a very conceptual and precise manner.
2. Excites the students to think deeply about network concepts
3. Completes the entire syllabus of B.Tech/B.E in EEE,ECE,EIE
4. Introduces basic concepts of Control systems
5. Very good reference for students preparing for GATE, IES and other Engineering
Service exams

Cons:
1. Limited Number of Solved Problem is included. Since network analysis is highly mathematical, many solved problems of different types is excepted. That...
READ MORE

Please read this book while you're in Engineering itself.......very useful to understand circuit theory. An old but great book.

However, if you are looking for a book which contains numerous problems, then this one is not for you.....
READ MORE

No use just a waste of money
READ MORE

A book on Networks suggested to all under graduates to enhance their basic understanding about network principles. Well designed exercises.
READ MORE