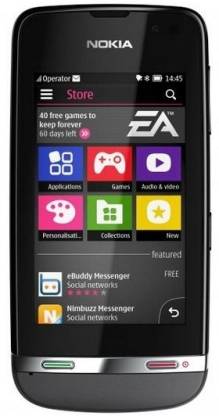 Get notified when this item comes back in stock.
Home
Mobiles & Accessories
Mobiles
Nokia Mobiles

Gaming on your smartphone when you are stuck at work or travelling on a train is always a refreshing experience. Nokia has taken this user experience to a higher level with the Nokia Asha 311 which tries to find the right combination between a budget smartphone and a gaming device. The phone comes in a bar form and is run on Nokia’s own OS. The device is run on a high-powered 1 GHz processor and backed up by 128 MB RAM which provides for smooth functioning of applications and games on the device.

The screen on the device is a 3-inch LCD Capacitive Touchscreen which provides a WQVGA resolution of 240 x 400 pixels.

The phone comes with a 3.2 megapixel primary camera which doubles up to capture 640 x 480 pixels video recording as well. The camera features useful tools like a 4x Digital zoom, Fixed focus, Self Timer, Auto Exposure and Image Editor to make the user’s picture capturing experience simple and easy.

The Nokia Asha 311 is a stylish device which comes in a rectangular frame with nominally curved edges. The phone comes in dimensions of 52 x 106 x 12.9 mm and weighs in at 95 g which makes the device both slim and light in weight. The display is protected by Corning Gorilla Glass which is an extremely thin and light glass engineered to resist damage by scratch or force. The display also includes effective sensors such as an Accelerometer which rotates the screen depending on the orientation of the phone and an Ambient Light sensor which adjusts the screen brightness according to the surrounding light.

The device is capable of holding the user’s music and video collection as it comes with an expandable memory card slot which can boost the memory on the phone up to 32 GB using a micro SD card. This memory is in addition to the 140 MB internal memory which the phone possesses. Additionally, the Nokia Asha 311 comes with 256 MB ROM.

The device is powered by a 1110 mAh Li-Ion battery which promises to provide the user with up to 14 hours of talktime when used on the 2G network and up to 6 hours on the 3G network.

The device comes with multiple features for the user to stay connected at home, work or on the move. The Nokia Asha 311 comes with GPRS and EDGE technology to stay connected over the 2G network as well as a 3G functionality. Additionally, the device comes with a WiFi capability to browse the internet via a wireless network. Files and documents can also be transferred through the micro USB port or the Bluetooth function on the device. The phone also becomes a navigation aid in the form of Nokia Maps which uses GPS support.
The device is capable of keeping the user entertained via the inbuilt music player, video player and FM radio. Social networking Apps like Facebook, Twitter and Orkut can keep the user connected to friends and family while also being able to share pictures using the Flickr App.

Alright, here we go...I bought it few days back, though needless to say flipkart service was real fast, i was eagerly waiting for this new Phone. I thought to write a review but then I wanted to use it handsomely so that I can make a fair judgement.

Should you go for this one or not depends on your requirement, the price of this phone is sort of the starting price of Android phones. I personally don't have much interest in apps(and the hoopla it's having). I guess if I would really intereste...
READ MORE

The Nokia 311 is a very competitively priced handset and comes with all the features necessary for a phone for a normal use.
If you are looking for an Android in this range, you're being just too blindfolded. Android needs pretty decent specifications to run smoothly and S40 is perfect for a phone in this range. Don't write negative reviews mentioning the absence of Android. If you need Android, this phone is simply not for you (move forward).
I however expected S60 in this, but the modified ...
READ MORE

The Flagship of Nokia

i bought this mobile for my mom, but after using this for sometime i was really amazed with its responsive touch and performance,every features is uniquely cool,specially easy access of everything at this price range,though the cam quality is not upto expectations but its defiantly better than any other 3 mp mobiles at this range, but who cares this is the first touch mobile shes using for the first time, and tell u what, its very easy to learn, think ill buy one more for me,i have x3-02 tou...
READ MORE

great phone
severe competition has made nokia to launch sweet products at sweet prices.
excellent build quality.
features(gps ,3g ,wifi ,gorilla glass ,nokia badge,3.2 mp camera)at only 6500
certianly better than galaxy y in many aspects
5 or 6 models like this in every range would make nokia comeback in style
READ MORE

I was using a HTC desire earlier. Though its an android.. my usage was just in music, video, and surfing!
This bar is so cool with its features and performance.
really love using it!
if u dont like android.. close your eyes and buy this mobile.
READ MORE

Nokia will change the mobile world in 2013

By this product i think nokia should promise there believe in us.I congragulate nokia to introduce such a wonderful product in a very less price.I think in 2013 nokia get their top place by the coming of nokia asha and windows phone .once again thank you nokia from the users who loved to use a capacitive touch by less price.
READ MORE

Nokia has finally come with a world class product for a reasonable price.The phone is cute and have a sleek design.I have used galaxy y,mixwalkman nd optimus before but this gives me the best satisfaction.it is too good for INR 6430 as u have got a 3.2 mp camera and notification bar really helps while using.....if u have a budget of around INR 7000 ,then go for it.If u buy from flipkart u will get it for 6430....go for it....its worth the money...
READ MORE

Guys this phone is very much helgful for them who does not style in their way and very much sure of nokia that in the market nokia sleek design and their os means symbian is high in rates though like nokia very much as i want style to be with me . I assure this product will be the king of nokia in the market for its features like hsdpa 3g,wifi 802.11,gorrila glass,3.2 megapix cam,3 sensors, navigation,2.1 bluetooth and last but not the least smartphone
READ MORE

Well...Undoubtedly Nokia has done a great job in giving this phone a smartphone feature but somewhere it lacks that thing. No matter the phone is equipped with a good processor and a clear display with 3g and wifi support and other technical specifications which you can know through this page but there are few minute things a normal user would like to have in his/her phone that lacks in it. Being an android user previously i would like to bring in limelight few points:-