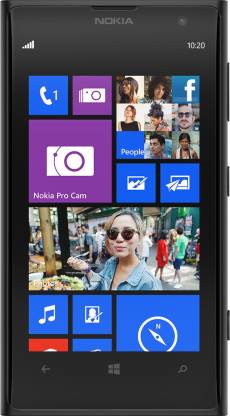 Taking the smartphone world by storm with revolutionary camera technology is the Lumia 1020 that puts together Nokia’s inherent penchant for design with powerful technology, changing the very feel of what a smartphone feels like.

Armed confidently with a whopping 41 megapixel camera sensor, the 1020 leaves most other non-professional photo-taking devices in the dust, making you jump with joy over the crisp, sharp, as perfect as life pictures that you click on the phone. Aided and abetted in its quest for camera domination, the camera comes with Optical Image Stabilization that makes those annoying blurred edges a thing of the past and PureView technology that harnesses resolution, sharpness and clarity, captures the essence of life itself without loss in transmission – an unbeatable feat.


Shoot at high resolution and then zoom into the frame to appreciate the finer details without any distortion or pixilation – the camera is designed in such a way that you can totally edit the picture without having to compromise on pixels and picture quality.

Take the easy way – pick up the Nokia Lumia 1020 and click away to capture stunning images with the Pro Cam to aid you in the quest to fill Facebook albums with amazing shots. Adjust focus, shutter speed, white balance and much more on the smart controls that are more than easy to understand.

There is always that one moment that you want to relive over and over again, it never gets old. The Lumia 1020 helps you do just that – record in full HD, capture sharp, detailed HD videos that you can zoom 6x times into accompanied by distortion-free sound and replay the moment exactly as it felt as many times as you want.

The smartphone from Nokia comes with the Vyclone app that lets you create, sync and edit different views of a moment you have with your friends. A birthday party becomes so much more interesting when you put together all the photos that have been taken into one hilarious, entertaining video that you can have a lot of fun over.

Simple, intuitive and amazingly easy on the eye, the Windows Phone 8 operating system on the 1020 lets your fingers flit around on it, performing actions with easy and letting you get pampered to how simple everything is easy to do. With more Live Tiles, tethering support, custom ringtones for different notifications, rotation lock and more nifty features, the OS takes the streamlined Windows experience to the next level.

The Nokia Lumia 1020 uses a 41 Megapixel camera sensor with PureView technology, optical stabilization and amazing high-resolution zoom for you to capture all your favorite moments in High Definition. The camera's zoom allows you to take super high resolution images, even after you have zoomed in.

Taking photos with this camera phone is made simpler thanks to Nokia's Camera app. Take photography to a whole new level by tweaking the adjusting focus, shutter speed and white balance with easy, intuitive controls.

The Nokia Lumia 1020 is perfect for taking high definition videos as it has a zoom that can up to six times without losing any of its quality. With Nokia Rich Recording, you will be able to capture blur-free videos with full stereo sound which allows you to relive the moment as if you were right there.

The Lumia 1020 comes with Vyclone - a social video platform that allows you to co-create and edit multiple views of a shared moment to make multi-angle movies. Just point your phone, shoot and record and let Vyclone do the rest. Your mixed video can then be shared across your network and the world at large.

The Lumia 1020 comes with Windows Phone 8 pre-installed and Microsoft Office, allowing you to customize Live Tiles and other exclusive features.

The Lumia 1020 is not just for taking photos. It is powered by a Dual Core 1.5 GHz Qualcomm Snapdragon S4 Processor with 2GB RAM to deliver faster processing speeds. This allows you to multitask easily and ensures that your apps open quickly and effectively.

The Lumia 1020 comes with 32 GB internal memory, allowing you to store more movies, music and games on to your phone.

This phone is WiFi enabled and supports 3G networks. It has a WiFi hotspot tethering feature which allows you to create WiFi network that other devices can use connect to the internet. The phone also has A-GPS and GLONASS technology for navigation and Bluetooth for sharing media with other devices.

This phone comes with a proximity sensor that turns off the phone's display when you are on a call. The accelerometer controls the orientation of the phone and is good for motion gaming. The ambient light sensor adjusts the screen's brightness for optimal viewing in different conditions. It also has a magnetometer for navigation apps.

If you seen Transformers movie, there is TRUE saying about this Nokia there -

"Nokias are real nasty.
You've got to respect the Japanese.
They know the way of the samurai"

Well its a long dream of owning an Phone with best camera got accomplished recently becoz of Flipkart and here is the review of my Lumia 1020:-

About 'FACT' - U know, good moments happen to u only when u dont have a camera. And u fell for it without capturing it. But when u have have DSLR or Digicam right with nothin w...
READ MORE

THE BEAST IS BACK!!!

It all goes back to 2012 when the pureview 808 was launched...the fact that it ran on the so called outdated symbian platform that piece didnt take up well...but the 1020 is an amazing combo of the 41 mps. of the 808 and the benchmark low light photography and the OIS of the predecessor 920...seems like nokia's endeavour is showing fruit now;)...anyways...the device is an excellent masterpiece of hardware and optics.
#has six carl zeiss lenses for the perfect photography unlike the five of 80...
READ MORE

Pros:
1. Windows operating system:Anyone who uses Windows like me(I have 920) will agree that Windows is improving at very fast rate.They fixed major issues with Amber update and now more update are coming with GDR3. To all windows users check with your Mobile company before updating for GDR3 as there are reports that one might loose warranty if you update for GDR3.
2:Built quality and Display: It's Lumia 920 with Lumia 925 screen and a huge hump at the rear. Think at such high price they sho...
READ MORE

I purchased it when it was not really available in market (only online booking was available). When my friends asked me about the price and I told them, their reaction came with a comment like "Had you bought a bike of this price, entire society would have seen and appraised".... Ha ha.

Little hurting, but when the features are seen, and when the use is experienced, this is awesome..... Truly Awesome…!!!

I had fed-up with Andriod phones for their POOR battery backups and Nokia Lumia 1020 is...
READ MORE

BAAP of all phones just @13999 at flipkart sale

ryt i got lumia 1020 @ 13999 at the flipkart sale , just loved the phone,never imagined to have 1020 @ such low price,though i was waiting for a month to buy lumia 830,so FLIPKART thank you, for such a lovely sale,regarding specs 2 gb Ram and 32 Gb space makes it work flow like fluid and yess the camera 41 mp brings floor breaking pix,i wanted to shut anyhow mouth of peopple who were against the sale,its not possible to serve all billion population ,the phone at this cost is all new and awe...
READ MORE

Imaging Beast, A little over priced though.

What is best: Flipkart ofcoure! Delivery date was 5th November, and I would have missed clicking Diwali pictures with the phone's awesome camera. So I mailed them and requested for earlier delivery. Lo and behold, phone is with me, since yesterday 2nd November.

The camera: Even as the camera saves the high resolution images simultaneousl...
READ MORE

Discover the Undiscovered with Nokia Lumia 1020

Although the major attraction of Nokia Lumia 1020-the 41 MP PureView camera made its entry long ago with the Nokia 808 PureView, its usage with a smarter software platform was long being awaited and wished. Finally, Nokia has done the same and presented its faithful followers with the PureView technology on a smart camera. Since I was also included in the same list, the launch of the Nokia Lumia 1020 also came as a sweet surprise for me and I took no time to fork out money as I was already in...
READ MORE

1st thing: 5 star of Flipkart for delivering it in between 24 hours. Thanks guys.

I have been using this phone from past 1 week and from the day 1 it feels solid, stable and premium quality product. But, it heats up when getting charged using stock charger and whenever i play heavy games like Six guns, Asphault etc. But if i am charging with 1A S3 charger, it works fine.

I have moved from S3 (Android) to Windows and i can really tell you that this change is good. Faster and reliable. But a...
READ MORE

Before going ahead with my review and experience, I would like to clear one doubt regarding the product. Many buyers have a dilemma, because of it's pricing Rs. 23999/-, whether it is original/brand new or faulty/used. Guys, the price has been slashed almost half all over the world and it's box price(MRP) is Rs 29999/- only. It's damn original and brand new.

1. Look wise it is not so fancy specially back side due to huge camera module but over all its nice to have i...
READ MORE

this is the phone for those who,
1) don't use much apps ( yes sir, windows app store have some serious app issues, the app gap compare to android or ios is HUGE)
2) want a exceptional camera(seriously it beats the shit out of any other mobile camera period)
3) fed up with lot of freezing of O.S (i used sony xperia sl b4 and it hangs a LOT, am not saying windows os doesn't hang but comparatively its very less like 5:1 ratio )
in short, get this phone if u r seriously passionate about the 41MP ...
READ MORE

7
2
Permalink
Report Abuse
+
All 685 reviews
Have doubts regarding this product?
Safe and Secure Payments.Easy returns.100% Authentic products.
You might be interested in

Selfie Sticks
Min. 30% Off
Shop Now
Back to top