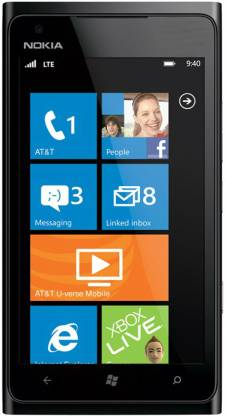 Nokia has brought about its latest high end offering to the smartphone market in the form of the Nokia Lumia 900 which packs in its rectangular frame a large number of extremely smart features. The device comes in a bar form and is run on the Windows Phone 7.5 (Mango) OS. The operating system is backed up by an extremely powerful 1.4 GHz Qualcomm Scorpion processor as well as 512 MB of RAM to ensure that applications on the device are run in a smooth and efficient manner.

The display of the Nokia Lumia is an enlarged 4.3-inch AMOLED Capacitive Touch Screen which provides a WVGA resolution of 480 x 800 pixels. The high detail of the display is due to the Adreno 205 graphics processing unit. Additionally, the device also comes with a micro SIM feature.

The phone comes with a powerful 8 megapixel primary camera which is backed up by a dual LED flash so you can click pictures in low light. The primary camera is capable of recording video in HD at a resolution of 1280 x 720 pixels for high video clarity. The camera features a 3x digital zoom as well as other useful features such as Carl Zeiss Optics, Geo-tagging and the option of auto and manual exposure. Additionally, the phone comes with a 1 megapixel secondary camera so that you can conduct video calling easily.

The Nokia Lumia 900 is a smart looking and stylishly designed smartphone with a cool rectangular frame. The phone comes in dimensions of 68.5 x 127.8 x 11.5 mm which makes it quite a slim device. The phone weighs in at 160 g which gives you a good feel in the palm of your hand. The screen of the phone is an AMOLED which provides for much better viewing for the user. The display screen is protected by the extremely tough and durable Corning Gorilla Glass and features brightness control to adjust the brightness of the device according to the ambient light. Other sensors included in the phone include a 3D accelerometer, proximity sensor, Compass, Gyroscope and Ambient Light sensor.

This Nokia Lumia 900 possesses 16 GB of internal memory and is powered by a durable 1830 mAh Li-Ion battery which promises to provide up to 8 hours of talktime if used on the 2G network and 7 hours of talktime when used on the 3G network. On standby, the device is capable of running for up to 300 hours.

The device is capable of keeping the user connected to the internet at home, work or even on the move. The Nokia Lumia 900 comes packed with GPRS and EDGE technology which will keep you connected to the internet via the 2G network. For a faster browsing experience the device contains HSDPA and HSUPA technology which connect you using the 3G functionality on the phone. Connecting to a wireless network is simple as that would require you to switch on the WiFi capability on the device. Exchanging files and documents from this phone to another device can be done using the Bluetooth functionality or the micro USB port located on the phone.

Additionally, the Nokia Lumia 900 serves as an excellent navigation aid in the form of Nokia Maps or Bing Maps which uses the assisted-GPS functionality of this smartphone. This Nokia device also comes with a music player, video player as well as an FM radio to keep you entertained from anywhere.

Additional features of the device include video stabilization, internet radio and voice input. Social networking Apps such as Facebook, Twitter, LinkedIn and Instant messaging come pre-installed into the phone to keep you connected to family and friends from anywhere. An excellent phone in terms of usability, the Nokia Lumia 900 is definitely a worthy buy.

I would urge everyone to visit nearby Nokia Priority Dealer and use Nokia 800/900 for a while.
What you will realise is that, a phone need not have a quadcore processor. Even with a single core processor you can find a zippy, snappy performance.

[ After the launch of Quadcore based phones, NVIDIA's statement was - there is no real need for quadcore processors in the market ]

Mango OS may not offer you 80-90% customisation like Android does, nor can it give you a VERY strong ecosystem like A...
READ MORE

Wait for the game-changer 920

Well, this time nokia has just tried to clear their inventory up by dumping this phone in Indian market whereas the much better lumia 920 is just going to be released soon at almost the same pricing and beating all sg-sIII, iphone5 etc. So its a very easy decision to leave it and wait for a while for a better supported WP8 and an all new awesome hardware which demands this one to be half priced now.... Performance wise, it still is a very good phone but not what it is offering...
READ MORE

Nokia, you're out of your mind!

I'm a Nokia Lumia 800 user and have reviewed it with 5 stars as it is an a great product.

This time Nokia shouldn't have launched the Lumia 900 after it became outdated 2 months ago when Windows 8 was announced. The new Lumia lineup- 820 and 920 have been announced, why launch this phone in one of its most important market in the world!!

Existing Lumia users are already annoyed that there will be no upgrade to Windows 8 and what is Nokia thinking?? They must be out of their mind to launch ...
READ MORE

Bought this phone from a Nokia priority store. The phone'd design is amazing with a gorgeous amoled clear black display. The WP 7.5 OS is super fast when compared to my Galaxy S2. I think the Lumia 900 is the best WP 7.5 phone to have.
READ MORE

As a deep fan of Nokia as a brand I wish to write something here friends!!!

Against Lumia 800/900 I strongly recommend to wait for Lumia 820 the best, handy and full of advancement! It will be worth of price as well as satisfaction to the user!
READ MORE

A good phone, but priced out of market...

I think Nokia has come out with a stylish product. I own an iphone and i found the screen and touch interface quite comparable. Windows 7.5 looks nice and different, though whether it will get upgraded to the latest Windows 8 remains to be seen. Also, with upcoming 820 and 920 launches, will Nokia focus on hardware and software for these models in future? My biggest issue: Pricing! At Rs. 32,000, this simply is not a sensible buy; I can buy a Apple phone for the same! With the festival season...
READ MORE

Too late too expesive

It's a good & excellent phone but don't buy...I strongly suggest wait for a while & buy Lumia 920

Its Amazing gadget, with all dezired features.

This is not a review but a kind of free advice and answer to previous questions.
First thing first, Nokia India, this is not at all acceptable that u never never release flgship phones in india. When 900 was a flagship, then u never launched it, and as soon as new flagship announced, u launched it. Cant indians taste the goodness of these phones?
Anyways, Lumia 900 is no doubt an amazing phone.
Those who said 800 do not have front camers, here is the answer.
Those who said screen is small, he...
READ MORE

4
5
Permalink
Report Abuse
+
All 48 reviews
Have doubts regarding this product?
Safe and Secure Payments.Easy returns.100% Authentic products.
You might be interested in