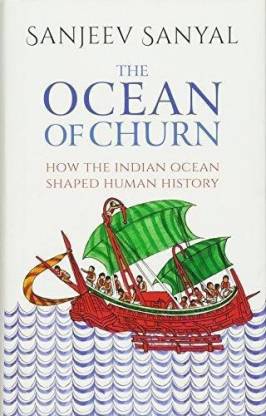 Get notified when this item comes back in stock.
Home
Books
History and Archaeology Books

Description
Much of human history has played itself out along the rim of the Indian Ocean. In a first-of-its-kind attempt, bestselling author Sanjeev Sanyal tells the history of this significant region, which stretches across East Africa, the Middle East and the Indian subcontinent to South East Asia and Australia. He narrates a fascinating tale about the earliest human migrations out of Africa and the great cities of Angkor and Vijayanagar; medieval Arab empires and Chinese 'treasure fleets'; the rivalries of European colonial powers and a new dawn. Sanjeev explores remote archaeological sites, ancient inscriptions, maritime trading networks and half-forgotten oral histories, to make exciting revelations. In his inimitable style, he draws upon existing and new evidence to challenge well-established claims about famous historical characters and the flow of history. Adventurers, merchants, explorers, monks, swashbuckling pirates, revolutionaries and warrior princesses populate this colourful and multifaceted narrative. The Ocean of Churn takes the reader on an amazing journey through medieval geopolitics and eyewitness accounts of long-lost cities to the latest genetic discoveries about human origins, bringing alive a region that has defined civilization from the very beginning.
Read More
Specifications
Book Details
Contributors
Dimensions
Ratings & Reviews
4.6
★
502 Ratings &
40 Reviews
Easy to Read
Recommended
Page Quality
5

This book is a must for history nerds. Written in lucid style it keeps you captivated throughout its read. Its not what you would call a history book in an academic sense and neither it isn't meant to be. While the writer isn't a professional historian, you wouldn't feel it any time during its read. Its broad sweep of our history anchoring at sea. The book takes a lot from previous book by author "The land of seven rivers" (highly recommended) which focussed on North India mostly but overall ...
READ MORE

it's a good book which explores the past. sanjeev sanyal has done a fantastic research and his works on history is getting popular day by day. Have also read his earlier books 'land of seven rivers ' and 'India's renaissance'. looking forward for many more to come.
READ MORE

This is an amazing work. Wow .. I mean Indian history is colonial history. They are not going to tell about the grand narrative of this civilization. But for the first time we have something which really opens the door to an alternate reality. I was just awe struck with the kind of things we are not taught in our text books. I mean a continuous civilization which unlike other ancient civilizations still survives and we are not told why it survived in the first place. How come such a civilizat...
READ MORE

Marvelous exposition of the interconnectedness of history!

If history is to be written to make it accessible to the lay reader, the student, and make it interesting, Sanjeev Sanyal is one author I would pick. “The Ocean of Churn” is Sanjeev Sanyal’s continuing and gentle attempt to shake Indians from their stupor and look at history afresh. It is breathtaking, when one surveys how history, geography, and the history of Arthashastra (economics) in India have been taught – each divorced from the other. This book is a much-needed corrective.

Very fascinating read. Makes you realize how isolationist have we become in our world view and consequently, in our approach to the world. At the same time, the Chinese are in a voyage to relive the legend of Xheng Ze. Need to focus more on the Indian Ocean and the possibilities and what it could achieve is a lesson this history well reflects. Great work by Sanyal Sir.
READ MORE

The author has explained some wonderful facts which we would otherwise not know of.

This is a must read for everyone, a great informative book.
READ MORE

Indeed it was a great experience to read about hidden and decisive history of India which was totally ignored in NCERT syllabus.
READ MORE

worth to read, a novel on Indian sea route history
READ MORE

no issues with book or content. rating it down for the incorrect book format description. the description states as hard bound by the book was paperback
READ MORE

2
1
Permalink
Report Abuse
+
All 40 reviews
Questions and Answers
Q:Is this book is in Hindi?
A:It's in English, although a Hindi version is available
Joydeep Mukherjee
Certified Buyer
0
0
Report Abuse
Read other answers
Q:HardBound as written on Description of book on this page, even in Title at the title. I am disappointed as I received PaperBack. What you received - HardBound or Paperback Book?
A:Paperback book.
Anonymous
Certified Buyer
0
0
Report Abuse
Read other answers
Didn't get the right answer you were looking for
Safe and Secure Payments.Easy returns.100% Authentic products.
You might be interested in