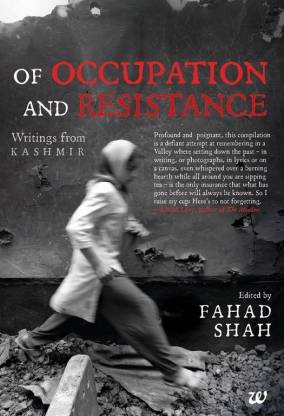 Of Occupation and Resistance is a political study of the situation in Kashmir, edited by Fahad Shah.

Kashmir, it is a land craved by Kings, desired by monarchs and dreamed about by emperors. It maintains a stalwart image as the muse of poets from time immemorial, and it continues to arouse strong emotions even to this day. Ever since the Partition of India, it has been the centre of the territorial disputes of India and Pakistan. This land, once prized for its beauty and riches, is now filled with soldiers and guns. Yet, it is possible to get too caught up in the political trauma to forget the beauty beneath the façade. There is a stern tenacity in the blood of Kashmiris, exemplified by their refusal to stand down despite the crippling political chaos. In this book, Fahad Shah combines several personal accounts of life in Kashmir, making a blend that is at once moving and eye-opening. He paints a picture through the stories of Kashmiris as they live under political oppression, of a schoolgirl as she continuously has to deal with the fear of daily “crackdowns”, of a gravedigger as he goes about his task – at once too unnerving and melancholic as he buries maimed youths. From the story of a boy trying to stifle his grief and protest through music, to that of mother as she stands in wait for her son who was forced into disappearance, these accounts plunge readers into the abyssal trauma that haunts Kashmiris in their every waking hour. In doing so, it tells the story of the most sought-after prize India has to offer.

Fahad Shah is an Indian writer and journalist based in Kashmir. Currently the Editor-In-Chief and founder of The Kashmir Walla magazine, he has been prominently featured in several national and international publications.

Shah was one of the finalists for South Asia's Manthan Award in 2011 for his contribution in media.

A wornderful collection! Best in form, authentic in content, depicts the right perspective and mutes the issue into an issue for all. A very fine English writing, as emotive as it is authentic from the ground reality. This collection proves once again that the best of litterature comes in the open with protest values. An idea becomes potent when taken up by the masses, a literature too follows the same law. Fahad has made his mark. Long live people's aspirations and resolves
READ MORE

Kashmiris need to tell their stories of oppression and subjugation by Indian state and pakistan. Start has already been made by Basharat Peer and Mirza Waheed and this book is an important addition. It takes into consideration every aspect of oppression.Some pieces have been written in beautiful prose but others are just ' 5 dead, 20 injured' journalistic language.......Overall an amazing read.

Read it to challenge your basic beliefs........see how media is fooling you when it comes to repor...
READ MORE

The book is good but in my opinion becomes monotonous over the pages as similar ordeal has been stated but with different individuals. Lots of errors are there ( don't know printing or editing), so please re-edit if possible.
READ MORE

Industrial Studies Books
Min. 30% Off
Shop Now
Back to top