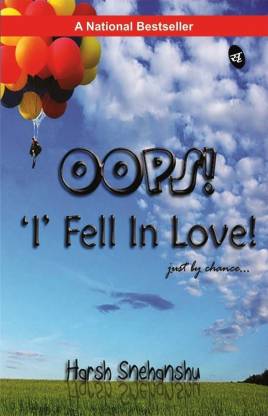 Oops! 'I' Fell In Love! is the debut novel of Harsh Snehanshu, an IIT-ian turned author. It is the love story of a small-town guy from Indore, who is an engineering student at IIT-Delhi and completely in love with a young and bubbly Delhi girl. Being complete opposites and yet attracted to each other, they make this romance fiction more interesting!

A love story of the modern times, the book captures how Kanav, an IIT-ian, struggles to redesign his life in the metropolitan city of Delhi, while being completely smitten by his beloved, Tanya. The protagonist Kanav Bajaj, a youth from a small town in Indore, secures admission at IIT-Delhi to pursue engineering. Kanav is also shy and studious, and not quite a favourite among girls.

Kanav’s life takes a turn when he meets Tanya, a young and cheerful girl from LSR, Delhi. He is immediately attracted to her as she is just so unlike him in every way. Aryan, Anuj and Sameer, their other friends, play important roles in the book. These friends add an element of zing to Kanav’s boring and studious life that is shaken every time the beautiful Tanya appears.

One of the highlights of the novel is an account of a sequence of dates between Kanav and Tanya, and the bloopers of a first-time romance.

It is Harsh’s debut novel, a contemporary romantic fiction, which was first published by Srishthi publications in the year 2009.

Harsh Snehanshu, born on August 29, 1989, is an Indian author and a young entrepreneur, who has to his credit a debut novel Oops! 'I' Fell in Love!.

He published his second book, titled Ouch! That ‘Hearts’ , in 2011. His writing style is witty and entertaining.

He is also the owner of a start-up called thewittyshit.com, an online platform where one can submit witty one-liners and network with other creative minds. Harsh completed his B.Tech from IIT Delhi. He has a keen interest in photography, biographies, and music.

The most gripping novel I have ever read.

The first line to last: you won't be able to leave this book. It's important to note that the author was just 19 when he published it, which is a remarkable fact for he churned out such a masterpiece.

All the best for your next books.
READ MORE

Comparisons can be drawn with Chetan Bhagat.:-0!!

Life and the value of an IITian can be known... The story wazz quite interesting esp. the beginning itself motivated me to read the whole book. The book can be suplied with tagz such azz humourous, love story, emotional, romantic and entertaining. It wazz somewhat motivating az i found that Life & problems of 'Kanav' little bit matched with that of myn!! i lovd the performace of Kanav at 'Waikiki', temple, bus stop and finally at the garage!!

all hail harsh snehanshu !!!
this is pure love story depicted in a simple manner .
the language and the style of writing is awesome .
i will let you to laugh and cry and it will give you a ever lasting experience !!!
a must BUY !!!!
READ MORE

A good book for with simple and effective narration

This is a good book for with simple and effective narration (I mean only 'good', mind it!). The very first thing which I should say is, I never felt bore at any point of this book. The credit goes to the author and all his friends[or team] who helped him by reviewing the content [As he mentioned in acknowledgement]. Initially, the story starts with routine college/hostel stuff at IITD and later it moves pleasantly with out and un imaginable twists,in fact interesting.One thing author has prov...
READ MORE

Narrated by Kanav, the story revolves around IIT and the actual mentality and mindset of what he calls "THE CREAM OF THE NATION".The story has every element in it which ensures you are clinked to the book till the last page. Its a love story looked at from a different angle giving a completely new dimension to LOVE STORIES. The humour of the author and the awesome use of his wits makes it all the more "Readable". This is absolutely no short of a modern classic and I can well understand why it...
READ MORE

I dont know why are writers harping upon writing love stories alone. and that too on the same cliched lines. How i wish the young minds worked on something to rather look forward to. I picked up this book because i sure like to read love stories but not the ones with the same cliched story line, and so very typically depicted.
READ MORE

Got it as a gift and i am planning to give a most torture novel to the person who recommended him to give me this. Ok some lines like spectacles one are good but they are mereley nothing but just wisecracks. And that too only two to three.

Don't get me wrong Harsh(writer){as he is still much bigger as an author or person from me}. Even is this was inspired by real, i am not complaining that.(also i came to know about IIT T-shirt slogan, i wanted too) Maybe telling an incident and narrating ...
READ MORE

Well, i made a mistake..n judged the book by its cover....!!
This book is stupid , lame and is a love story of a despo.. to be honest.
If this story is inspired by the life of anyone..that anyone must have been a big time looser...and if this story is a work of imagination...the author seems to be too much desperate.
The book stands nowhere in comparison with Chetan bhagats novels.. not good at all for beginners and a total waste of time for pro readers if they opt to give this novel a chan...
READ MORE

Well may be not perfect but the writer gave his best shot. It was simply a utilization of time and I enjoyed reading it.The books is totally an awesome showcase of how troubles can come from no where. Must read for all romance lovers.
READ MORE

Good, but not that much

The book is good , i agree considering first half..
its interesting.
But at the last it looks like the writer had a harry in completing the book.
It had an abrupt ending. He just gave a vague idea what the character was going through. Moreover , it looked like an essay at the last pages.
U cant say whether its positive or negative
Its all page interesting story , apart from the last few pages
READ MORE