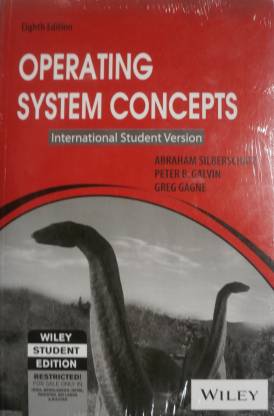 Operating System Concepts, written by Peter B. Galvin, Greg Gagne and Abraham Silberschatz, is an informative guide to operating systems with an overview of all the major aspects.

Other core areas in Operating System Concepts include multi-core processors, transactional memory, Solaris 10 memory management, NUMA and the ZFS file system of Sun. The book contains a simulator for apt demonstration of topics and is divided into parts. Some chapters in this book include Operating System Structures, CPU Scheduling, Processes, Deadlocks, Threads and File-System Interface. There are many additional topics covered under these chapters such as Deadlock prevention, Deadlock characterization, Algorithm Evaluation, Thread scheduling, Process scheduling, System Calls, System Boot and so on.

This book contains many problems and exercises in programming for the benefit of readers. Students and aspirants can confidently tackle intricacies and nuances of operating systems with the help of this book.

Abraham Silberschatz is an author and academic. Abraham Silberschatz has also written Database System Concepts. Abraham Silberschatz has been Vice President at the Information Sciences Research Center of Bell Labs and professor at the University of Texas. He has held the Computer Science chair at Yale and is presently the Sidney J. Weinberg professor at Yale University. He is a Fellow of IEEE, ACM and AAAS. He has won awards like the IEEE Taylor L. Booth Education, ACM Karl V. Karlstrom, Bell Laboratories President’s Award and ACM SIGMOD Contribution Award. He has published editorials for the Boston Globe, Industry Standard, The New York Times and the Hartford Courant. Storage systems, operating systems, database systems and network management are his research interests.

Peter B. Galvin is an author, consultant, columnist, and trainer. Peter B. Galvin has also authored Applied Operating Systems Concepts. Peter B. Galvin has worked at the Computer Science department of Brown University as Systems Manager and is the Chief Technologist at Corporate Technologies Inc. He has contributed to Byte, SysAdmin, SunWorld and Usenix. He has trained security and system administrators and lectured at institutions and conferences.

This Book is in easy language plus it clarify your concepts.....

It has brief Knowledge...
READ MORE

This is a very nice book for computer science scholars and for those who want easy and straight concepts of OS.
Helpful for interview purposes also.
Thank you flipkart for wonderful shopping experience.
READ MORE

One of the best books on the subject. I am not too happy with the book's dimensions as I prefer leaner and flattened form, but apart from that, good stuff.
READ MORE

NIce and easy as always

I ordered this book and received it at ease .
Thanks to flipkart!!

Book is amazing and easy to understand. Takes you to a trip to internal working of operating systems
READ MORE

It is a nice book. You would feel like reading it while in the comfort on your bed! It is all theory and is explained very nicely, as said in the form of a story. You might get sleepy though while reading :D
READ MORE

A Very Nice Collection Of Knowledge For The Operating Systems..
This book Performs The Job Well .
Contains Everything Which Is Needed For The Learner
So Go For This Book If You Want Easy And Good Knowledge About Os.
READ MORE

Its truly a really good book :) !! Loved it !! Flipkart Thumbs up :D. This book is phenomenal to what more than i expected . Truly inspirational how books could work in my world of system operations . To be honest i'm just a beginner in the process . . But then on grwoing , i like to grow the hard way, which means losing as many times so that i can be success full in whatsoever category that i'm placed in :)
READ MORE

Just began with Into part, so review is totally on initial impressions and not so books savvy yours truly.
The Language or flow is Simple, Texts have ample conveying knowledge, low or less mess.

Just that Flipkart took a little extra time to deliver, though its fine.

EDIT:
The book is not for starters as it deals with typical concept without much bac...
READ MORE

The product is very good and happy to thank flipkart for providing best quality books in very low rate comparing to nearby bookstall prices..
READ MORE

Buy this if u know what u want

An excellent book with all the fundamentals of the operating systems explained in a professional manner. You should buy this book if u have some basic knowledge abut the algorithms and schemes and logic behind the OS. This is NOT A SPOON FEEDING book. You are introduced to the world of OS such that you are in line of becoming expert in it. BEST OF LUCK for your study.
READ MORE