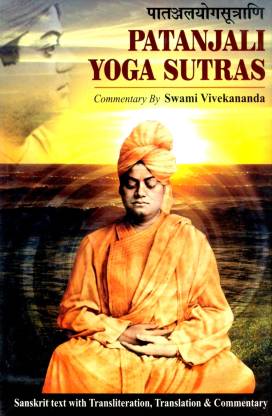 Understand and learn the path to concentration and meditation with this study manual for the practice of Raja Yoga. This book will prove valuable to all yoga lovers who require it for their well-being.

If you are one who is seeking the spiritual path then this book is a perfect for you with its teachings which can be read again and again. The classic sutras, a. k. a thought-threads, are almost 4000 years old and cover yogic teachings on topics like ethics, meditation and physical postures. They provide the reader with directions on how they can deal with situations in their everyday life. You will find that the sutras are presented in their purest form and in the original Sanskrit script along with the translation, transliteration and commentary by Sri Swami Vivekananda who is best known as a respected Hindu monk. This book gives the reader a view into the practical advices of the Swamiji that help in mastering the mind to achieve physical, mental and emotional harmony.

Swami Vivekananda was born as Narendra Nath Dutta. He was a Hindu monk and chief disciple of Ramakrishna, a 19th century saint. He has played an important role in the introduction of Indian philosophies of Vedanta and Yoga to the Western world and has been given credit for raising awareness in interfaith and bringing Hinduism in the forefront as a major world religion in the 19th century. He is the founder of the Ramakrishna Math and the Ramakrishna Mission. One of his most memorable speeches started with “Brothers and sisters of America…”. During this speech, he introduced Hinduism at the Parliament of the World’s Religions in Chicago in the year 1893.

The book is of immense benefit for the general masses. This is a must for the seekers of spiritual bliss. however, there are a number of printing mistakes. The publisher may kindly note for correction.
READ MORE

I got Patanjali's Yoga Sutra on time as promised. It is a brilliant book, but unfortunately, it was ridden with spelling mistakes and other errors to such a degree that it was distracting. I wrote an email to the publisher, Vijay Goel, but I got no acknowledgement from them. It is a pity to read such a lofty text printed so shabbily. I suggest you check the publisher when you order the book. I loved reading the commentary by Swami Vivekanand, so if you can get the same book, but by a differen...
READ MORE

This book by Maharshi Patanjali is a must read. Ignore the spelling mistakes and focus on the gist,

On the quality of the book.
READ MORE

This product is useful to understand patanjali Yoga sutra but not in details. It needs voluminous book.
READ MORE

Every one should once try this book to read
READ MORE

The overall book is fantastic, the way the commentary is presented by Swami Vivekananda makes the reader spellbound. It's easy to understand the complicated Shlolas in a simple and lucid manner.

But... there are endless number of grammatical errors and mistakes due to poor editing. Because of this, the flow breaks and mind is deviated from the subject matter. It's better if in further editions, the errors are corrected.
READ MORE

0
0
Permalink
Report Abuse
+
All 14 reviews
Questions and Answers
Q:how many yoga poses are there?
A:This book does not pertain to hathayoga (asanas) but to spiritual path.
Venkatesh Tamba
Certified Buyer
5
1
Report Abuse
Q:does this book contains all 199 yoga sutras
A:yes.
Anonymous
Certified Buyer
1
0
Report Abuse
Didn't get the right answer you were looking for
Safe and Secure Payments.Easy returns.100% Authentic products.
You might be interested in

Other Books
Min. 20% Off
Shop Now
Back to top