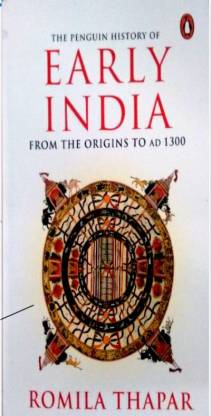 The Penguin History of Early India - From the Origins to AD 1300 (English, Paperback, Thapar Romila)

The Penguin History of Early India - From the Origins to AD 1300  (English, Paperback, Thapar Romila)

The Penguin History Of Early India From The Origins To AD 1300 is a book about the history of India, and talks in astonishing detail about the colorful history of this interesting country.

The Penguin History Of Early India From The Origins To AD 1300 gives its readers an exhaustive idea about the history of India, from the time of its formation, through its gradual coalition, to its structure in AD 1300. The account is not a chronological narration of the events that took place to form India, but the narration of the story of India. Romila Thapar’s version of the history of India is composed of many stories of the different parts of India which gradually came together to form one great country.

Romila Thapar’s The Penguin History Of Early India From The Origins To AD 1300 takes its readers on a journey. The journey begins from the prehistoric era of the Indus Valley Civilization and other such ancient civilizations. It continues through to the emergence of the great empires of the Mauryas, Cholas, and the Guptas. It also talks about the creation of the great epics of The Ramayana and The Mahabharata, and the lives of great scholars and saints who had a huge impact on the life of India and its people such as Gautam Buddha and King Ashoka. The narration of history ends with the year AD 1300, with the reign of Rajendra III, the last Chola King.

The Penguin History Of Early India From The Origins To AD 1300 aims at showing the connections between the social, political, economic and religious aspects of each period. The focus is on tracing the continuities in the history of Early India. Diverse subjects such as religion, art, erotica, language, society are analyzed in conjunction with each other.

This updated edition contains added research on the history of India based on new excavation data, new methods of interpretation of history and changes in academic understanding of the discipline.

She graduated from Panjab University and received her doctorate degree from the School of Oriental and African Studies from the University of London. Her prime area of research is ancient Indian History. She has won many awards for her excellent work in the field of history. These include the Kluge Prize for the Study of Humanity in 2008 and numerous honorary doctorates from universities such as the University of Calcutta, University of Hyderabad, University of Oxford and University of Edinburgh. 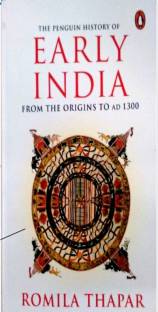 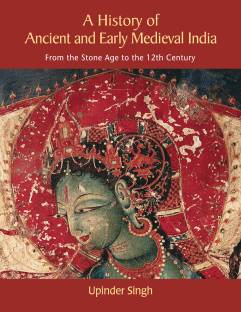 If you like to know about Indian civilization from beginning - well almost - then this is the book. Written nicely in academician style, full of researched material and authentic. Authenticity is a moving target, so it is authentic as of now, since this edition is also modified from previous edition as author had new data available to her. That makes previous edition of this book not so authentic, I guess. It would have been nice if there was a change-log, so we could have known what are the ...
READ MORE

Go for some other better books.

As per the above review i would like to summarize as follows:

The good part is content of the book. It is accurate and quite in depth. Its good informative book.

The bad part is the small font size and poor paper quality. Also the language of the book is difficult for people who are not very conversant with English.

Finally this book is not intended for students giving Civil service exam or any competitive exam. There are better books on ancient history of India as far as lucid writing is...
READ MORE

IT IS VERY IMPORTANT FOR A BOOK that a reader should be able to read it. Paper is of bad quality, fonts are small. Both these things make it almost impossible to read , however avid reader you are or however good are the contents of the book. You need a magnifying glass to read it. I would advise flipkart to put those books on sale which have good quality paper and fonts are visible.
READ MORE

I enjoy reading history,as i am just interested in the history of India specially ancient India.romila thapar's even-handed treatment of the historical record is highly readable and packed full of insight. detailed account of India's history with attention to the socio-political environment of each era,Absolutely the most readable early introduction to Indian history-readable and brilliant
READ MORE

Romila Thapar is known to have leftist bend and is considered anti-Hindu in terms of her way of reading and presenting history. Eric Hobsbawms, review at the back page reminded me of Noam CHomsky's review on the back page of one of the books by Arundhati Roy. And I was expecting a biased book. But once I started reading it, I found the content fairly clear and to the point. The start wasn't the best I guess. but as one goes on, one finds that its a beautiful book.

I do not find the font size...
READ MORE

First up, let me warn any potential buyers that this is not a textbook. If you're looking for a textbook with lots of facts (for UPSC perhaps ?), head to Upinder Singh's Comprehensive History of Modern India.

Rather, this work ranks high on analysis, providing you with the unique historical insights that only Romila Thapar can provide. For instance, during my BA first year, I was hard pressed to understand the transition from early Iron Age settlements to the advanced cities of the Mauryan ...
READ MORE

I had bought this book on college reference and found out it to be exceedingly informative. Anybody who wants to buy this book should be interested enough about history of early India, otherwise it may be found having too much of information. Otherwise, it's a superb book. Kudos to Flipkart for fast delivery..got it in 2 days!!
READ MORE

includes chapter wise description about history of earlier India with great use of English vocabulary . Writing style is elegant . But as per as competitive Exams are concerned like UPSC , you may give it a miss. Gathering information from this book will consume time . As for knowledge basics , good book .
READ MORE

Awesome book if you are looking to get a quick doze of history.

This book is superb if you want to increase or revive your knowledge of Indian continent in a quick doze. It covers all the aspect in one view as well as on counter view. Romila thapar presents the history in such a lucid language that you will not need dictionary while reading it. This book is the first in the series of three, I would suggest anyone preparing to get into a B-school and want to brush-up history of India for interview purpose this book is a must.
READ MORE