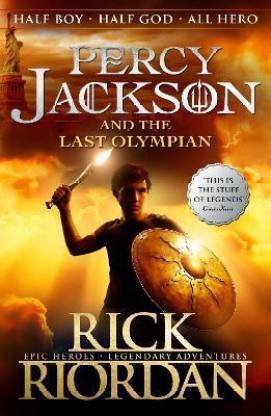 Kronos, the Lord of Time, has escaped his prison in Tartarus. Now he makes his way towards New York City, and the only ones who have any chance of stopping the mighty Titan are the Olympians, who are busy with the rampaging monster Typhon. Percy Jackson, the son of Poseidon, tries to fight off Kronos with Beckendorf, the son of Hephaestus. However, Kronos is too powerful even for them. Percy needs to understand the truth about his past and his duty towards mankind to be able to stand any chance against the might Titan. Gods, Demi-Gods and all manner of creatures out of ancient mythology come alive on the streets of Manhatten for a battle to end all battles. The fate of Western Civilization itself hangs in the balance. In this final book in the Percy Jackson and the Olympians series, Percy will have to embrace his fate, and understand what prophecy has laid in store for him since before he was even born.

Rick Riordan is an American writer. He is best known for his series Tres Navarre and Percy Jackson and the Olympians.

Riordan graduated from the University of Texas.

Last and the best

This book is the best among all the Percy Jackson books. I am really happy Percy Jakcson's adventure continues in Heroes of olympus. Percy Jackson is, and always be the most funny,adventurous,bravest and best greek demigod.
READ MORE

A really great ending to a fabulous series

I completed reading this book in just 6 hrs so you can get that it's really capturing and once you start reading you won't want to stop. The author, Rick Riordan, has really done a great work with this book and has made the story move along at a steady pace so as the reader can soak in the twists. This book, as a matter of fact, has more battles than the others I its series which one would expect of it and each battle is explained in an intricate manner so as the reader feels as if he/she is ...
READ MORE

A Great Ending to A Great Franchise.

Percy Jackson and the Olympians: The Last Olympian, belongs to a category of its own. The novel beautifully blends together genres such as Action/ Adventure, Romance, Tragedy, Family, and Faith, and presents some strikingly intriguing philosophical thoughts.

On top of this, its got its author, who does such a stunning work at understanding the adolescent psyche, that it doesn't go without saying that this book deserves its high sales.

There are sardonic portrayals; such as those of the fate...
READ MORE

Awesome book! Wonderful, exciting, thrilling and of course the best Percy Jackson series' part! :D It was fun reading it! XD MUST GO FOR IT!!!
And yes, it deserves: 5/5 rating! ;)

>>I will suggest that you should read all the 4 parts of Percy Jackson series' before reading it so get its BEST!

Best book in the series!

Percy Jackson and the Last Olympian is the best of all Percy Jackson books......not predictable AT ALL, and it's so fast that you never get bored, really nice book. A great end to the series. Thumbs up to Rick Riordan.
READ MORE

Firstly, i would like to say about Flipkart because if I would start with the book, I would forget about everything, so the delivery was brilliant. I wonder why they have introduced one day delivery option because with standard delivery also i received it the very next morning.
Now coming back to the book It is just unbelievable! So well written, I love the fact that the author puts humor in between serious moments too and makes it a perfect book to read. The book is just for everyone and fo...
READ MORE

Battle for Olympus who could the last Olympian be?

Percy Jackson and last Olympian.
Publisher Puffin
ISBN 978-0-141-34008-1
I invite all of you to guess who the last Olympian is, before you read the book and why. Please add it as comments.
Though not woven around any particular myth. It explores a variety of them.
To an adult reader probably the weakest of the books. But for the teenager it is definitely action packed. Hordes of monsters, lots of strategies.
The Olympian Hestia is honoured.
Prometheus makes an appearance.
But the author talks...
READ MORE

amazing it's good and the delivery was superb like flash great deal!!,!,!
READ MORE

An awesome end to Percy Jackson series . The fight between god's and demigods against the titans reaches a conclusion . An awesome book and i would recommend it to everyone .
READ MORE

Rick Riordan saved the best for the last! This book is the best of the 5 book series. I hope Rick Riordan keeps writing more books on Greek Mythology and My best wishes for flipkart.
READ MORE