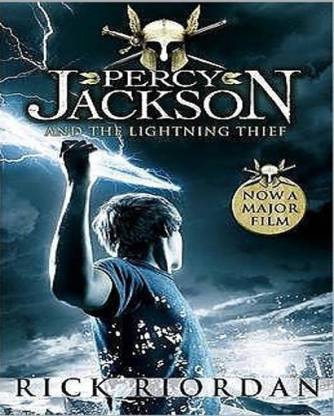 The Percy Jackson series of books would be liked by all preteens and teens. What's good about the book is that it's humorous and very understandable yet descriptive. It introduces the reader to the world where Greek gods are real. It is fun to read and very informative. The protagonist of these books, a boy called Percy Jackson, discovers that he is a 'demi-god'. That is, a human being born from a god and a mortal.

The first five books have been written from the point-of-view of Percy. This first-person narration makes it easier to understand as the language is simple. The stories aren't predictable and that's what makes them interesting.

The first book of the series- Percy Jackson and the lightning thief is a good introduction to the series. Many terms that are used often in the other books, are introduced to the reader in this book.

The book describes the enmity between the greatest Greek gods- Zeus, the god of air and the god of gods, Poseidon the god of water and Hades the god of death and the underworld. It shows how different these gods are from each other, though they are brothers.

Percy Jackson, helped by his friend- Grover, reaches the only place safe for demi-gods, Camp Half-blood. That's when he discovers that Zeus, a god he didn't even know, really existed before he reached camp, is accusing him of stealing Zeus's mightiest weapon, the lightning bolt. The story continues with some amazing incidents where Percy finds himself doing all sorts of things from entering the underworld to battling Ares, the god of war.

I felt this book was very interesting and educational though it was slightly violent. People who liked the '39 clues' series would like this. The author of the book- Rick Riordan knows the way think, very well. It was so realistic, I had to keep reminding myself that this book was fiction. I would seriously recommend this book. Rick Riordan has also written the 'Kane chronicle' series.

Look, I didn't want to be a half-blood. I never asked to be the son of a Greek god.

I was just a normal kid, going to school, playing basketball, skateboarding. The usual. Until I accidentally vaporized my maths teacher. That's when things started really going wrong. Now I spend my time fighting with swords, battling monsters with my friends and generally trying to stay alive.

This is the one where Zeus, God of the Sky, thinks I've stolen his lightning bolt - and making Zeus angry is a very bad idea. 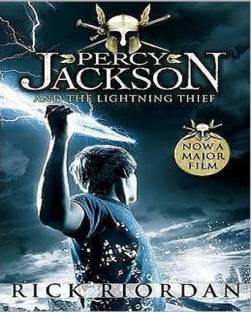 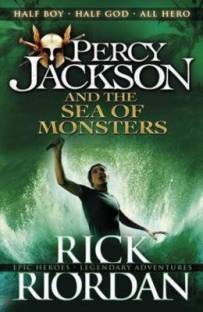 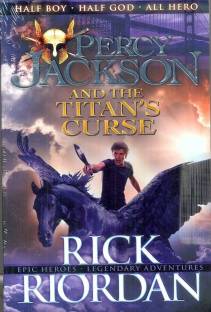 Flipkart made it boring. I mean the condition was not nice. Atleast I beg you , if you have any self respect, sell books in proper condition. What happened to Flipkart. I am a school teacher and I had decided to buy 400 history books from Flipkart for the school. Now it has gone to other sites like (I never wanted mention it but still) Amazon. The order was about 80000 rupees. Everybody was satisfied and now I have ordered 1000s of books. So sit back and calculate the amount.
READ MORE

This book is perfect to be given 5 stars, but was not happy with the packaging. ( normally other books I bought came with secure bubble wrapping)
READ MORE

This book's a great way of introducing Greek myths in an interesting manner to anyone who wants to know more about them. Written in an amazingly simple language, with elements of fun and humor, Rick Riordan fills the reader with the yearning to keep reading!

I loved the plot, the characters, the simple way everything proceeded and the emotions enthused within the pages. Some reviews say there are similarities between this book and the Harry Potter series and I guess that's kind of true, but...
READ MORE

The book is very interesting. I found the first few chapters a little boring. It generally happens when you read the first book in the series. The thrill starts from the sixteenth-seventeenth chapter. When the quest gets difficult to continue. It was fun reading the book. The adventure part was great.

Riordan wrote the book as if Percy was writing it himself. It makes it a lot more interesting. If you are looking for a nice, interesting and a bit big-fat book then this can be a gud choice. ...
READ MORE

I was recommended by my friends to read this book. At first glance,this book may appear like a fantasy epic but readers I warn you,that is merely a facade. It's kind of glues mythological characters in a modern world except that glue is boiled rice with curry. The author tried his best to throw every Greek creature in this book and in the middle story,this really becomes cumbersome. One God comes,he goes. A monster comes,then goes and so on. But it does succeed in telling the life of a dyslex...
READ MORE

I had heard a lot of this book series and became a big fan as soon as I read it . Thriller, mystery, fantasy, it has it all ... A must buy if you love mythical realism . Looking forward to buying the next part 😊Good job Flipkart and thanks for the amazing bookmark .
READ MORE

Full of adventure and thrills. Awesome book. Everyone should read this book.just fun to read it. One of the books of the year. vastly entertaining. A fantastic blend of myth and modern. its like cobweb. never come out the reader.
READ MORE

The book was great, packaging... not so much

I got it from Luluas. The book was wrapped in corrugated sheet and cling film (Also, no bookmark). The edges of the book was a little damaged. Other than that it was in a nice condition, I got it fast too.
Another thing, this is 2010's edition in case you're trying to make a set. I kind of tried to but I couldn't since the other 4 books I have are 2013's edition. If you only care about the content then no worries.
READ MORE

wow ! what a book

Its really a nice book.Once my sister said that this book really very interesting and also very thrilling with many twists .From that time I became interested to buy this book.then, as soon as I saw it in flipkart,I bought it. first 50 pages seemed boring but then it seemed very interesting that I can't even drop it .Its really a good buy in flipkart as the delivery was so quick.It a good book for everybody.
READ MORE