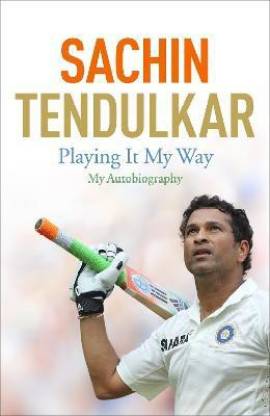 Playing it My Way is the bestselling autobiography of the God of Cricket himself, the Master Blaster, Sachin Tendulkar. Treat yourself to the story of the most celebrated cricketer of all time.

When he was a young lad, Tendulkar’s brother introduced him to cricket. As he practiced the game like a professional, he soon got an opportunity to train under a renowned cricket coach. He practiced and practiced until he became more than just a star of cricket. He also became the youngest Indian player ever to play international cricket, and won the hearts of millions of fans across the world. Although his stature was much-debated, Tendulkar stood his ground strong to entertain his fans by hitting centuries after centuries. In 2013, cricket fans everywhere watched as the greatest player in the history of the game retired from professional cricket. No one can speak lightly of Tendulkar, the God of the game who won the hearts of players on both sides of the playing field. India remains indebted to him for his massive contribution, and for the immense respect that he brought to the game as an individual. In this autobiography, cricket fans will be able to learn more about his life in his own words.

Sachin Tendulkar is an Indian sportsman and former professional cricketer. He has been playing the game since he was eleven years old and debuted in a Test match against Pakistan at the age of 16. He has represented Mumbai domestically and India at an International level for close to 24 years. Among several other notable achievements, he is the only player to have scored one hundred international centuries, to have completed more than 30,000 runs in international cricket and the first batsman to score a double century in an One Day International. Tendulkar has been awarded the Bharat Ratna for his contribution towards Indian sports and is the youngest recipient and the first sportsperson to receive the award so far.

Cricket is Religion.. Sachin is God

I usually don't read books but have pre ordered this one.. 'cos I am proud to be part of a generation where :

- We drank and ate boost just because GOD said boost is the secret of his energy
- Switched off television the moment GOD got out.. doesn't matter what others players do
- Chanted Saaaachin Saaaachin standing in front of the television every time GOD went out to bat
- We had tears during GOD's farewell speech
- We prayed for GOD's success
- We imitated the way GOD spoke, played his ...
READ MORE

A fine sportsman a finer human being !!

I was delighted to see ‘Playing it my way’ placed on my father’s bookshelf and picked it up to read the mammoth 450-page autobiography of Sachin Tendulkar in a few hours and I could hardly take off my eyes off from the book. I read the book not as an avid cricket lover (I hardly appreciate any sport), rather for the joy of knowing about the International sensation yet a simple human being – Sachin Tendulkar.

As my mind and heart raced through the vivid details of a sporting legend’s life – h...
READ MORE

Very nice book. Good delivery . Nice to read and also it is a quality product for better price.
READ MORE

The content of the is very good and deeply enriching but on receiving the product it seems like a used product. In brief,I am served a second hand book even after paying full price. Satisfied with book but not with service
READ MORE

A marvelous book helping us to know the life of the legendary cricker and the pain he had gone through his career will bring us an inspiration .
"CRICKET IS A GENTLEMAN GAME" with SACHIN TENDULKAR
READ MORE

Oh my god what should I say people like Sachin r rare @ this earth. Simple simple simple.
I just love this book. My son is more passionate about this book. should read.
READ MORE

everyone can understand this simple english and the history has been well placed in the form of an engulfing story.simply a great buy but one thing better go for free delivery because i received the product the next day itself ...enjoy reading
READ MORE

This Book Is a Bible

In India Cricket is a religion , Sachin is the GOD .
This Book shows a detailed life and upbringing of Sachin. It is full of ups and downs , funny and sad moments , moments to cherish moments to mourn . For true Sachin fans this book is a BIBLE .
We celebrated when he scored his 100th Century,
We celebrated when he scored his Double TON,
We cried when he played his last ball,
Wankhede stadium was house full on his 200th test match , tickets were sold in black .

I have always liked Sachin but never had been a huge fan of him. After reading this book, I should say that the respect has only gone down, as the very purpose of writing an autobiography has been defeated. The book doesn't disclose anything which is not known to us. The book will be interesting only for the people who have not followed cricket much. For a person like me who has been following almost every match that India has been playing in the last 20 yrs, the book literally has nothing. D...
READ MORE