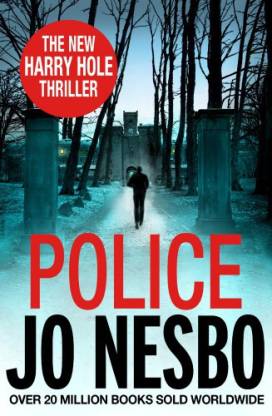 Police, by Jo Nesbo, is the latest book in the Harry Hole thriller series, a follow up to Phanton.

Oslo streets are now being stalked by a killer. The police need Harry Hole more urgently than ever. Police officers who had failed to solve crimes earlier are being slain brutally in the same scenes of crimes. The media is going frenzied about the killings as usual. And although Harry has helped save countless lives before, this time he is helpless, since those he loves the most are facing an appalling danger.

Jo Nesbo was born in Oslo. He played football for Norway’s premiere league team. He studied Economics at the Norwegian School of Economics. After serving in the military for three years, he also formed a music band, Di Derre. He penned the first crime novel, The Bat, the first in the Harry Hole Series, and has ever since been one of world’s bestselling crime writers. Some of the other titles in the Harry Hole Series are The Redbreast, Nemesis, The Devil’s Star, The Redeemer, and The Snowman.

A highly complex and intriguing novel. Jo Nesbo at his best.

This novel proves once again why Nesbo is good at what he does. Memorable characters and enough plot twists to keep anyone hooked. This book is worth a read.
READ MORE

The book is an awesome read!! Trust me ...this is a must buy. The book was delivered on time and in good condition
READ MORE

Brutal Murders inside... Awesome read though..

There is a deadly combination when Jo Nesbo is writing a plot around Harry Hole. Harry hole sticks to his basics and take actions to solve the cases...
Police is one of the brutal chapter from Harry Hole's chronicle where one of his closest buddy dies. A police serial murderer on a loose who cant be identified....
It took me couple of weeks to complete the book mainly because was busy with work.....

Finally Harry Hole has found his Nemesis and the killer is always one step ahead of Harry.....
READ MORE

amazing book as i expected , i think its better than sherlock holmes series , flipkart delivered in time ..... i can give it 5 star but not .....because when i got this book , its not new one , book cover was in bad condition
READ MORE