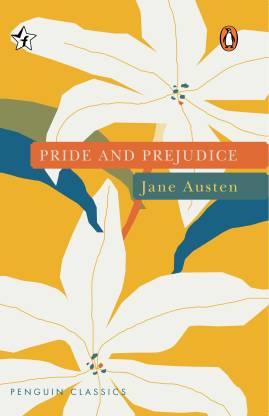 Pride and Prejudice is a particularly interesting and comical read for fans of Jane Austen. The romantic comedy is one of the author’s best works and revolves around the growing relationship between Elizabeth Bennet and Fitzwilliam Darcy.

Elizabeth is an intelligent and lively woman who has four beautiful sisters. Their mother’s only wish is for her daughters to be married off to wealthy and reputable men. Elizabeth meets the proud Darcy at a party that is taking place near her home. Her first thoughts about him are that he is snooty and so decides that she wants nothing to do with him. However, they get talking and, as time goes, realize that each of them has started to grow more and more tolerant to each other. The story reveals a lot about the society of the time in which the story is set.

Jane Austen was an English novelist, best remembered for her works of romance literature. She has also written: Emma, Persuasion, Mansfield Park, and Sense and Sensibility.

Pride and Prejudice was adapted into several films, most notably in 1940 starring Greer Garson and Laurence Olivier, and in 2005 starring Keira Knightley and Matthew Macfadyen.

A great piece of work

The book will never fail to leave a long standing impression in your mind and is a great gift to us. Such a beautifully written classic and romantic piece of work.
It might be difficult initially to get along but later on, you will never be able to put it down until you reach the last page.
READ MORE

A really good purchase for me. It's small and compact size . Font size is good and bright. Overall a good book in this prize range. This will be my first classic novel.
READ MORE

Got book for Rs 69 . Book was packed well along with a bookmarker. The font size is small compared to other standard books. Paper quality is manageable. The part which I didn't like are new chapters doesn't start from next page. once one chapter is over in that page itself next chapter starts with the new heading and also since it's a collaboration with flipkart their logo is on the book hence it is embrassing if you want to gift to some one. Otherwise pretty happy with the book for 69rs.
READ MORE

Best quality provided by flipkart by this amount. Page is lil bit yellowish, but if you're a book lover, you'll definitely be happy after having this. Great job, flipkart.
Happy customer!
:3
READ MORE

received it in perfect condition along with a bookmark! the delivery was also earlier than expected, flipkart is indeed impressive. the story, of course, is wonderfully written, perfect for booknerds like me who prefer classics! :)
READ MORE

This is penguin classical book . The story is excellently described as a reality . The acting of Mrs Elizabeth and Mr Darcy have got to give Oscar award .
Thanks to FLIP to get my order with safe handed and that was really good service . Once again thank you
READ MORE

Awesome book. It is the best book to begin with if you are starting to read classic literature. Yet to read but the packaging was good and I got a bookmark as well
READ MORE