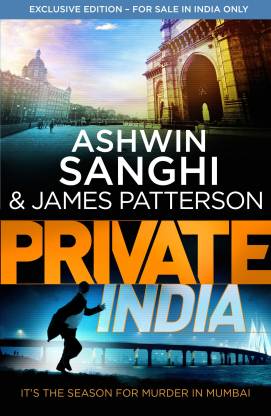 Private India is a thrilling suspense novel from two masters of the art: Ashwin Sanghi and James Patterson.

When a series of seemingly unconnected murders rock the city of Mumbai with the macabre rituals and artefacts found around the corpses, Private India, a leading investigation agency takes the case. Santosh Wagh, the head of the organization, has only one mission. He needs to stop the killers before they strike again. However, in a city of over 13 million people, he finds that the clock is ticking too fast. He finds himself pitted against underworld dons and a Godman who isn't what he seems. However, the worst is yet to come and Private India itself may be threatened with a revelation that could destroy the entire organization.

Ashwin Sanghi is an Indian writer and entrepreneur. He has also written: Chanakya’s Chant and The Krishna Key. He is also known by his pseudonym: Shawn Haigins.

A graduate of the Yale School of Management and St. Xavier’s College, he has since been awarded several acclaims for his work. His second book has been optioned for a movie by UTV and is expected to begin production soon. He currently lives in Mumbai with his loving family.

James Patterson is a bestselling American writer. He is best known for Along Came a Spider, Jack & Jill, When the Wind Blows and Step on a Crack among over 100 others.

Thanks flipkart for delivering it, the very next day within 24 hours of order. And about the book, it is written by Ashwin and James patterson masters of the thriller genre. What more can you ask for. This book is a perfect mix of gripping storytelling and funny one liners that Ashwin is so famous for. I felt the story was more driven by patterson than ashwin and other than that it is a gripping read which will keep you occupied until you complete it.
READ MORE

It all started with Chanakya's Chant which inspired me to read other books written by
Ashwin. Reading has always been relaxing and thrilling for me. It was a valentine's gift from my husband. Great gift it was. Inspired me to read the other books after chanakya's chant it was The Rozabal line. After this i started following ashwin and his work. When The Krishna key was released flipkart enabled me to get a preorder copy. After The Krishna Key I have been waiting for Ashwin's next work. Trus...
READ MORE

After the spectacular 'Chanakya's Chant' and barely passable 'Krishna Key', Ashwin Sanghi rekindles his knack for tense page turners and reinforces his standing as one of the best thriller writers in the country. In cahoots with globally renowned James Patterson this time, the author initiates the book in an almost bland slow-paced fashion, follows it up by carefully building an intriguing and suspenseful plot. The last 150 pages really step up the game and bring the interwoven plot to a sati...
READ MORE


I think this is enough for the review. Luckily, I didn't get a flipkart bookmark with this order :D
Never mind, the book is un-keep-down-able and one does not need a bookmark. :)

After a little thinking on the plot, I came to a personal conclusion that the authors tell a great story but do not build the characters properly. They tend to build the characters in a haste, and there are so many awkwardly-fast-built characters that there comes a point where one loos...
READ MORE

Complete all your tasks before you begin this book

“Private India” is possibly the first (of many) story of the detective agency Private India (the Indian branch of Private, a renowned investigation company with branches around the globe run by former CIA agent Jack Morgan) with Santosh Wagh in charge. Santosh’s team consists of his assistant Nisha Gandhe, technology geek Hari and Mubeen, the forensics expert. Santosh is never at santosh (peace) with himself, blaming himself for the accident in which his wife and child were killed, and drowni...
READ MORE

Predictable Storyline with a few surprises

The plot of the story is set in Mumbai where seemingly unconnected people are being murdered by strangulation in a ritualistic manner and after the murder, strange objects are carefully arranged around corpses. This is the latest book in the internationally best-selling Private series. Private is world's finest investigation agency headed by former CIA agent Jack Morgan. The book deals with India Branch of Private India located in Mumbai and headed by Santosh Wagh.

As it happens with Books o...
READ MORE

Love the combination of Patterson and Sanghi

I am a big fan of Ashwin Sanghi and have read all three of his previous books. But I loved those for their research. This one is evidently written for a western audience. Reads more like a Ludlum or Forsythe. Excellent pace, perfect twists, super thrills. Loved it! I sincerely hope that Sanghi and Patterson will do more novels together.
READ MORE

Its an extremely racy & awesome read...however, one thing which i found very peculiar was that the central character was quite close to the main character of the television series named "House"..
Mumbai City is covered beautifully and not like a bollywood movie (if you know what i mean)....few parts of the book may leave you with a lot of ....why....BUT in spite of whatever i have to say that it was an awesome book and a great read!!
READ MORE

A good thriller based in mumbai

Murders in the city of Mumbai, clearly the work of a serial killer, are being investigated by Private India, a premium investigative agency.
The head of Private India, Santosh Wagh is fighting his own private demons as he races against time to solve the murders, before the serial killer strikes again.
As the murders are investigated, it becomes a complicated case, when the Rich and Famous, the Politically Powerful, a Gang Leader, a Godman and even Terrorists, all seem to be somehow involved.
...
READ MORE