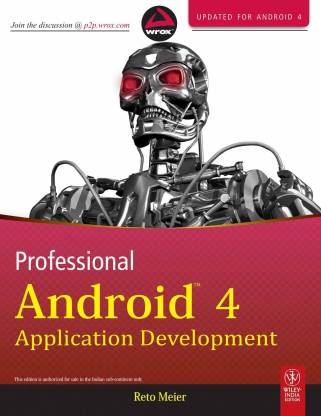 The fast-growing popularity of Android smartphones and tablets creates a huge opportunities for developers. If you're an experienced developer, you can start creating robust mobile Android apps right away with this professional guide to Android 4 application development. Written by one of Google's lead Android developer advocates, this practical book walks you through a series of hands-on projects that illustrate the features of the Android SDK. That includes all the new APIs introduced in Android 3 and 4, including building for tablets, using the Action Bar, Wi-Fi Direct, NFC Beam, and more.

About the Author
Reto Meier is Google's lead Android Developer Advocate for Europe, the Middle East, and Africa. Reto's development approach is focused on delivering intuitive applications with compelling user interfaces, optimally designed for the working environment of end users. His blog posts and tutorials regularly appear on the official Android Developer blog as well as his own blog. With over 5.5k followers on Twitter he has developed a strong social network following.

A must read for ANDROID APP Programming (read it, only if you know Java well.)

A nice book for those entering the world of Android app programming. This book takes us through the tour of Ice cream Sandwich.
(note: There are other similarly titled for previous version too, but not recommended as they are obsolete.)
This book designed for Beginner to Advanced users. The first 2 chapters help to get onboard with Android. Chapter 3 onward basics of Android programming is covered.
(note: The book expects us to have some basic working knowledge of Java language).
READ MORE

The author does a very decent job of making it easy to understand the various intricacies of Android app development for both beginners and professionals. Even though there was not much detail regarding the UI design as I would have liked, the book touches up on other aspects like Services, Databases and Sockets pretty well.
The readability is good and examples used fulfill the needs of each topic taken up.
I've referred quite a few books for Android, I think this is one which definitely is a...
READ MORE

Superb book for Beg. as well as for Professionals.
Need Patience to understand the book but once understood then it builds very strong foundation on Android.
READ MORE

Tries to cover up everything and thus lacks detail. Superficial.

The book contains a good basic knowledge of what is an activity, fragment etc but when it comes to advanced topics like Custom Views, Animation etc, it provides a rather confusing representation. It tends to overlook basics of such topics. I have read the book many times and the only help I got was using it as a reference for boilerplate code.
If you really want to get a good insight of how android is designed and how it should be used, use the Google Developer pages. Also, HeadFirst design ...
READ MORE

The best for beginners!!

Definitely the best for beginners!! :)
Helps you right from the beginning with clear ans easily understandable examples.
Go for it!
Satisfied #Recommended
READ MORE

Very useful if you have just started learning about android application development, It has enough content that one can develop his own sample applications. There are code snippets for every functionality explained in this book. Also not to forget it comes at very good selling price for 350 rupees when I ordered.
READ MORE

Covers the subject in depth

This book is the latest edition of the earlier book with a similar title, I assume. It covers Android Development in great detail. This book is based on a specific case study project. I like this approach since the case study application, called "Earthquake!", can be installed on your device first and start reading through the book. At every pitstops in the book, you see what are you reading about, on the phone, literally! :) Then you get your PC and do that particular feature with your own t...
READ MORE

The Best Book not only for Beginners but for experienced too.

First, as usual very happy with Flipkart's fastest delivery, i have ordered things from almost every website which delivers in India but none could beat Flipkart. Kudos!
About the book, this book is in one word, "Complete".
Either you are a novice programmer, planning to learn android for yourself or looking for a reference book, this book literally does both.
Starting from installing the Android SDK, everything is written in well structured way.
The code snippets given along with the theory...
READ MORE

A nice book of Android

I purchased this week last week, and go trough its UI part. It is pretty well written with nice examples.Only one things that bother me so far is that they provided online links for code snippet but after browsing I got that code is not updated.
Hope they will update code.
Overall a good book so far.
READ MORE

The best book i ever read on android development !!!
and the MRP of this is really around 700 !! so the best price on flipkart !!
and have a happy programming programmers !!
READ MORE