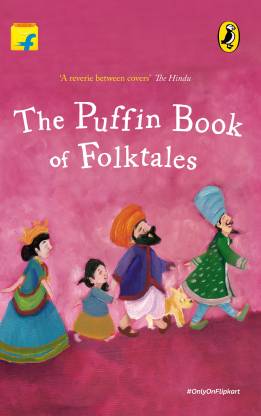 Ten timeless tales from India's finest writers
Explore an exciting and beautiful underwater world with Panna. Watch the little blue bird Podna fight a mighty king for his little brown Podni. Join Lord Ganesha on his quest for a pot of kheer. Read about lovelorn Lord Surya pining for his Harshringar, leaving the world in darkness. Help the dove get her egg back.
This is a motley treasury of ten heart-warming folktales by master storytellers Ruskin Bond, Sudha Murty, Devdutt Pattanaik, Kamala Das, Paro Anand and many others, with each author adding their own special touch.
A delightful book, it brings to life India's glorious cultural heritage in all its richness, along with generous doses of fun. Truly, a collector's item!

Manjula Padmanabhan is an author, playwright and cartoonist. Her books include Getting There, a quirky travel memoir; Harvest, winner of the 1997 Onassis Prize for theatre; Escape, a dark adventure novel; and two collections featuring her fuzzy-haired comic-strip character Suki.
Sudha Murty is a social activist, popular author and chairperson of the Infosys Foundation. She has written many short stories and four books for children. Two of her works, How I Taught My Grandmother to Read and Other Stories and Grandma's Bag of Stories, are Puffin bestsellers.
Paro Anand can't stop writing, and has written twenty-three books so far, for children, young adults and adults. She is a world record holder for helping children make the World's Longest Newspaper. She has performed her stories in many places. Her work has been listed on the IBBY Honor List. You can catch her in action at www.avantgardediaries.com and www.paroanand.com.
Musharraf Ali Farooqi is an author, novelist and translator. His children's fiction includes a picture book, The Cobbler's Holiday or Why Ants Don't Wear Shoes, and the collection The Amazing Moustaches of Moochhander the Iron Man and Other Stories. He is also the author of the illustrated novel Rabbit Rap. You can visit him at www.mafarooqi.com.
Devdutt Pattanaik loves to write, illustrate and lecture on the relevance of mythology in modern times. He has, since 1996, written over forty books and 700 columns for adults and children. He believes that stories are like chocolate Eclairs: you chew on the outside-the story-till you get to the soft sweetness inside-the idea. To know more about him, visit www.devdutt.com.
Shashi Deshpande started writing children's stories for her two young sons. Novelist and short story writer, she is the author of four children's books and eleven novels, out of which That Long Silence won the Sahitya Akademi Award. Her writing career began in 1970 with short stories, of which several volumes have been published.
Ruskin Bond has written over 500 short stories, essays and novellas, and more than forty books for children. His first novel, The Room on the Roof, was written when he was seventeen. He has received numerous awards, including the Padma Shri and the Sahitya Akademi's Bal Sahitya Puraskar.
A.K. Ramanujan was an award-winning translator and poet, whose works have been widely published and anthologized. These include, among others, Hymns for the Drowning, Speaking of Siva and Folktales from India.
Meera Uberoi wrote poems and stories for children, including Leadership Secrets from the Mahabharata, Tales from the Panchatantra, Lord Ganesha's Feast of Laughter and Classic Indian Tales for Children.
Kamala Das was widely known for her poetry, prose and columns, and immensely admired for the sensitivity with which she portrayed human emotions. Panna was her first children's book in English. Her works include The Sirens, Summer in Calcutta and her autobiography, My Story.

very good page quality. bind. cover and packaging. Penguin and flip-kart smart buy combined can create a name if they keep on like this.
READ MORE

it's fantastic. worth to buy. loved it
READ MORE

This book is just awesome.
A must read book.
READ MORE