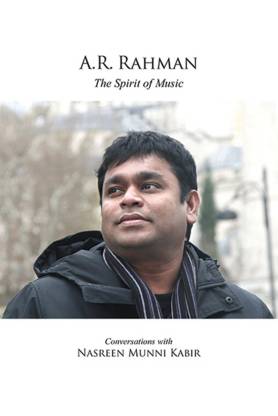 Published in 2011, A.R Rahman’s official biography by Nasreen Munni Kabir follows the journey of the music maestro from his modest beginnings to the well-deserved lair of success.

Indian composer and musician A.R Rahman is a household name around the world today and with the publishing of his official biography A.R. Rahman: The Spirit of Music, this prolific music composer has come even closer to his enormous fan base.

Written in the form of biographical conversations between the author and Rahman, the book beautifully takes us through the arduous but fruitful journey of this deeply private person, who has always kept a distance from the glitz and glamour of the music and entertainment industry.

Rahman answers a set of comprehensive questions, that detail his life before and after his international fame. Ranging from childhood anecdotes to his spiritual motivations, as well as the technicalities of his composing processes, the author brings out sides of Rahman that have never been seen before.

A.R. Rahman: The Spirit of Music indeed has provided deep insights into the life of this “Mozart of Madras”, who has also been included in the list of the world’s most influential people by Time magazine.

Winner of the Padma Bhushan, India’s third-highest civilian honour, along with two Academy Awards and four National Film Awards, composer of the scores of more than a hundred films, along with his brilliance at integrating classical Indian music styles with world music, Rahman and his life story, has been beautifully captured by the author.

Indian-born television producer Nasreen Munni Kabir, based in the UK, is well known in the television industry for producing Indian television movies for a British channel, Channel 4.

Apart from authoring A.R Rahman’s biography, she has also written books like The Dialogue Of Mother India, Bollywood Dreams, and Guru Dutt: A Life in Cinema.

Nasreen Munni Kabir was born in Hyderabad, India but is well known as a documentary filmmaker and author based in London. She was the recipient of the first Asian Womens’ Achievement Award for her work in promoting Indian films in the United Kingdom in 1999. She has produced various biographical documentaries of Indian stars such as Follow That Star (Amitabh Bachchan), and The Inner/Outer World of Shah Rukh Khan.

I have been a huge fan of A.R.Rahman since his movie Roja released.I always believe that a book like this(Question and Answer) would make a good reading only if the interviewer asks proper questions.Rahman can only reply to the questions asked.Unfortunately the author dosent seem to know much about Rahman's Tamil Film Industry's, which she has accepted.I believe the author could have made the book a better read by asking more appropriate questions.And shelling out 322 rupees for a 125 page bo...
READ MORE

I'm not much of a book reader but my love for Rahman made me buy and read this and I found it a decent enough book to hang on to.

Though it is not exactly a biography but if you are looking to find a book which tells a little about his background, his ideologies and how he grew in his career, it is a decent enough book for this price.

Apparently now Flipkart has increased the price, I bought it for much less that time.
READ MORE

the author is primarily from north hence all the types of questions she ask rahman is about his journey in Bollywood .very few things are told about his work in kollywood. rahman is composed more tamil movies than for hindi movies.But the author has raised questions only from north. the book failed my expectations. if you are tamil and loved to know about his work in tamil cinema .please don't buy this book
READ MORE

This is a wonderful book about A R Rahman and gives insight into what made him that he is now. I am a big fan of him and his music..I am happy I finally bought this book. It has lots of things like his childhood his relationship with prominent people like Javed Akhtar ,Gulzar and Mani Ratnam. All in all a must read book for Rahman fans.
READ MORE

This was my first purchase on Flipkart and needless to say the delivery and notification service was awesome.
I wanted this book from a long period since its launch, but was looking for some better deal.
Glad to say, I got the perfect deal on Flipkart.
About the book - Its an awesome book for all the Rahman fans, would highly recommend this book if u are eager to read the words of Rahman and know more about his life and his work.

Great book, lot of details about ARR and the way he thinks when he makes music.
His relationship with Directors, especially Mani Ratnam is inspiring. Gives a peek into how two great minds work when they are put together.

The book is more like an interview than a biography. I wish there would be a day when ARR writes an Autobiography with more dramatic revelations :)
READ MORE

This book takes us to a journey of a Lifetime. We undersand the spiritual faith that keeps him going, his faith and his plans.
This is a must read even for a non music lover, who wants to know the secret of success...

Order and got the same day

I ordered the book online in the early morning hours and received the book the same day. May be because I am in Bangalore, it was feasible for FLIPKART to ship the same day.
READ MORE