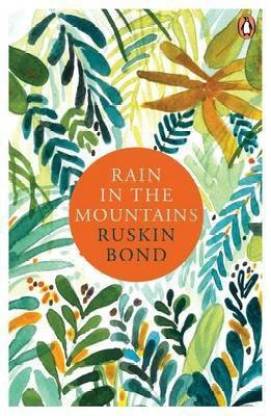 Rain In The Mountains: Notes From The Himalayas is a collection of semi-autobiographical writings of the eminent writer Ruskin Bond about his life at home in Mussoorie.

Rain In The Mountains: Notes From The Himalayas brings together some of Ruskin Bond’s most beautiful works from his years spent at the foothills of the Himalayas in the town of Mussoorie.

These are musings on his natural habitat, scenes from his daily life, in both prose and poetry. Though written in a simple language, they manage to create vivid imagery and capture the essence of mountain life. Some of his writings that are featured in the book are Once Upon A Mountain Time, Sounds I Like To Hear, How Far Is The River, and After The Monsoon.

Rain In The Mountains: Notes From The Himalayas covers the everyday life of the author with descriptive words and lucid writing.

Ruskin Bond is an acclaimed Indian writer, perhaps best known for his short stories for children.

In a writing career spanning over six decades, Bond wrote several novels, novellas, poems, vignettes, travelogues, and short stories. His works have been frequently collated and released as a complete collection. Among his most widely read novels are The Room On The Roof, A Flight Of Pigeons, and Delhi Is Not Far. The Eyes Have It and Time Stops At Shamli are among Bond’s most popular short stories.

Written primarily for young readers, his stories use simple language and often eulogize childhood days. Though nature is the prevailing theme in most of his works, he has also dabbled in the genres of mystery and ghost stories.

Born in Kasauli in 1934 in an English family, Bond grew up in the valley towns of Shimla and Dehradun. He studied at Bishop Cotton School, Shimla. His writing received recognition from the very beginning, with his first book, The Room On The Roof, winning the John Llewellyn Rhys prize in 1957. After a brief stint in journalism, Bond settled as a freelance writer in Landour, Mussoorie. His contribution to children's fiction was honoured with the prestigious Sahitya Akademi Award in 1992 and the Padma Shri in 1999.

I have read a lot of books on the Himalayas and mountains in general (including guides, journals , travelogues etc), but nothing like this , a true insight into the real love for the mountains , absolutely honest and picturesque. It is a nice warm feeling to see what Rusty sees in those enchanting mountains, the people who stay there and the subtle beauties of the life in the Hiamlayas. An absolute must read if you have ever loved the mountains , the way they are meant to be loved .......
READ MORE

Must have for a nature lover

One of the best from Ruskin Bond and a must have for a nature lovers.Bond weaves magic with his simple words when describing life in the hills..life of not only humans who call it their home but of birds,bees,flowers and all forms of life that live there.The book is mainly prose but dotted with poems that come straight from the heart.His keen observations narrated in simple language helps us visualise rain when its not happening,rivulets which are no where flowing near us...Reading this book ...
READ MORE

..as beautiful as mountains.

i thought i love the mountains most, but Mr.Bond's love for the mountains, specially for its freshness, mountain rains , and his beloved flowers is something special.

best thing is, you can still feel that he is as young as a child in his love for people and kids and above all mountains.

great stories for everyone to enjoy some peaceful time.

Ruskin Bond, a leviathonic pen-pal of mine, a chum of my natural plights, the setting sun of my cooling summers. A philosopher who loves nature mostly the Himalayan ambience, pens some fantastic stories with some delightful poetic lines with ease in this book.
If you want to get ready with your light backpacks to have a walk in the hills, Bond will be your forever guide and you will soon get marooned from this entire modern but humdrum life!
Thank you.
READ MORE

Rain in the Mountains:Notes from Himalayas by Ruskin Bond

Nature loving author Ruskin Bonds' soothing and comforting style is always enthralling.
His non-fiction write ups on the Rivers, mountains and terrains besides trees and birds which he has seen, encountered, experienced and enjoyed in and around Dehra Doon are selectively compiled to suit this enlivening title
Certainly one will become child-like while reading: Ofcourse I cannot avoid saying one may get enlightened consequently.
Readable font with appealing cover.
READ MORE

The book has a pretty good collection of stories and they are very well written. But some of them are kind of plain, but that is kind of expected, since in a collection of such amazing stories, some stories seem mediocre at best. That aside, this is must have collection for those rainy days, when the weather is bleak and all you want is a hot cup o' coffee, and an amazing book in your hand.
READ MORE

A delicious collection of essays

This is a book to be read with deep pleasure, quietly by yourself, connecting yourself to the kaleidoscope of nature's play. This is a beautiful collection of essays that you can read again and again to find peace and tranquility through the original words of a simple person (writer) who knew what is important in life!
READ MORE

Ruskin Bond truly describes nature's beauty at its best in his own way and this book is one of the best epitome of it. While going through the book one can feel the description of the minutest entity that nature has created in revered Ruskin's word. It brings us in proximity with mother nature & more specifically it gives an insight of the sheer amount of love that the writer is having for the mountains. It also reminds one of the childhood days when life was so innocent & free from all mun...
READ MORE

The best from Ruskin Bond

Simply his best book till date. It contains all that makes him the unique and mesmerizing author that he is - fiction stories, everyday events, notes on the mountains and nature, and some poems here and there.

A must buy for every Ruskin Bond fan !
READ MORE

rain in the mountains

The book compiles of words paint the himalaya , the beautiful crown of india. the words together is the path that reaches himalaya.i enjoy reading poems and the diary entries randomly especialy under the cover of nature. it's wonderful.
READ MORE