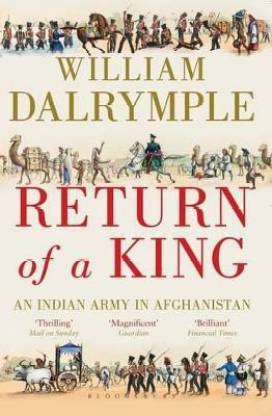 Return of a King presents a definitive analysis of the First Afghan War by prize-winning and bestselling historian, William Dalrymple.

Return of a King is an intriguing account of Britain’s invasion and occupation of Afghanistan from 1839 to 1842. Led by soldiers clad in scarlet cloaks, nearly 20,000 British and Indian soldiers marched through the hilly terrains of Afghanistan and re-established Shah Shuja ul-Mulk on the throne. They faced resistance on their way in, but after two years of tolerance the people of Afghanistan rose in violent and bloody rebellion. The First Anglo-Afghan War ended in Britain’s greatest military humiliation of the 19th century. An entire army of skilled and trained soldiers was crushed by poorly equipped tribesmen. Return of a King is a masterful and brilliant retelling of Britain’s greatest military disaster.

William Dalrymple is a Scottish historian, writer, art historian and speaker. One of the co-founders and co-directors of the annual Jaipur Literature Festival, Dalrymple was appointed a Whitney J. Oates Visiting Fellow in Humanities by the Princeton University. Dalrymple is an acclaimed historian and a graduate of Ampleforth College and Trinity College, Cambridge. He has also written City of Djinns, The Last Mughal: The Fall of a Dynasty, Delhi 1857 and In Xanadu: A Quest.

A Must Buy for History & Politics Enthusiasts

First off, those familiar with William Dalrymple's earlier works, notably 'White Mughals' and 'The Last Mughal' will not be disappointed with 'Return of a King'. The book contains what most of his readers will have now come to expect from a Dalrymple book - (1) meticulous research, (2) characters whose virtues and vices are duly brought out, (3) anecdotes (all stemming from his extensive research) , and (4) a style of story telling which ties in his research and the characters beautifully.

Return of a King: The Battle for Afghanistan is a unique read for history buffs in the trademark William Dalrymple style. This narrative history on the First Afghan War gives a panoramic perspective on the situation of the early nineteenth century Afghanistan.
The blood feud between the two foremost tribes, The Barakzais and the Sadozais, leads to a coup in the Durrani Sadozai Empire, and it falls to the rival Barakzais. The deposed king, Shah Shuja ul Mulk, dreams of winning his Empire b...
READ MORE

My bookshelf always has that special space for William Dalrymple, the master of historical fiction.
Return of a King deals with relatively unknown characters in time and space that does not concern us too much (it is not about Delhi or its Rulers is it!). Mughal courts and intrigues always makes for such lovely read but to make a subject like this into a page turner needs a magician.....and that I am now convinced William is.
This is the most brilliant book in this genre that I have read for ...
READ MORE

Return of a King

The book is very good and gives a lot of details to the The Great Game which was played by Russia and Britain on the grounds of Afganistan. Enjoyed a lot!
READ MORE

If you want to know how Afghanistan was created after first Anglo-Afghan war, this is most interesting piece of work..very meticulous research..page turner..as like a thriller movie infact better than that..it aroused my interest in history..thumbs up ..MUST READ.
READ MORE

Excellent effort, but could've been shorter.

Beautifully well written and thoroughly analysed book, although I believe Dalrymple could have omitted some of the more intricate aspects of Shah Shuja's life, which makes the plot a tad too deep to breeze through. Some of the characters for instance (Alexander Burnes, Dost Mohammed) etc swing from being the centre of the storyline to mere pawns as the narrative progresses. Nonetheless, the book is a fascinating and truly astounding effort. I like Dalrymple's argument that the revolt of 1857 ...
READ MORE

Revenge Can Be Sweet

Extensive researches by the author based upon Aafgan-Persian-Russian sources along with the usual British sources giving a good insight in all the different angles and viewpoint of the happenings, goes into the writing of this book and which is really so different from the usual and still followed 'Cambridge' school of imperial-colonial writers.

Dalrymple knows the art of lucid and smooth writing.The book describing the particular events of 1839-1842 and the general events concerning Aafgani...
READ MORE

For every history aficionado.

A well written book. The greatest skepticism that you have before reading a history book is related to impartiality of the writer. William Dalrymple will not disappoint you on the front of impartiality. The book is well researched and written in a simple manner devoid of lofty words. Although its a history book, it will spellbind you like a thriller novel. In fact, the book is better than many hollywood thrillers.!! Undoubtedly, after reading the book, you will be able to draw parallels betw...
READ MORE

A well researched and extremely well written historical masterpiece. A privilege to have read this; enjoyed it for the language, the historical facts and the splendid style of writing. One of the most enjoyable books I have read in a long long time.
READ MORE

I havent read it yet but ordered it for my father. He absolutely liked it and recommends the book to others. It is a must for people who like to read books with deep political overtones in it. Another masterpiece from the factory called William Dalrymple.
READ MORE

0
0
Permalink
Report Abuse
+
All 25 reviews
Have doubts regarding this product?
Safe and Secure Payments.Easy returns.100% Authentic products.
You might be interested in