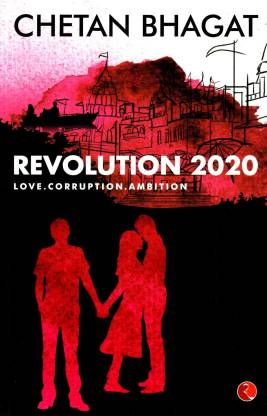 Revolution 2020 is an engaging tale of two best friends who fall in love with the same girl. The novel is set against the backdrop of rampant corruption, which one friend yields to, but the other fights.

The novel is set in Varanasi. Chetan Bhagat initiates the story through the central character Gopal. It is through Gopal’s narration of his life to the author that we are introduced to Raghav and Aarti. The story revolves around these three characters. While Gopal comes from a poor family, Raghav comes from a well-off family. Both set out to achieve success and realise their dreams. While Gopal’s main motive is to seek financial wealth, Raghav has always wanted to bring in a revolutionary change in the political arena of the country.

As circumstances may have it, both the boys fall in love with the same girl, Aarti. However, Aarti eventually falls for Raghav. The climax of the story reaches its peak when Aarti harbors feelings for Gopal too. Who will she finally choose? In the meantime, Gopal, through unfair means and with the help of a corrupt politician Shukla, starts an engineering college. Raghav goes on to become a successful journalist and begins to use this power to expose Shukla’s wrongdoings.

It is indeed an interesting tale that has been realistically depicted against the background of a real world where corruption looms large. It brings to light the corrupt system of education in India. Revolution 2020 was published in 2011 and turned out to be a bestseller.

Chetan Bhagat is an investment banker by profession. Though he is well known as an Indian author, speaker and columnist, he is seen more as India’s youth icon. He has also been listed in the category of 100 most influential people in the world by Time magazine. He also writes columns for Dainik Bhaskar and Times of India. Four of his books have been adapted into films. He is presently resides in Mumbai with his wife and two children.

Mr. Chetan Bhagat, you can definitely make friends out of enemies..... The moment I opened the package and started reading "Revolution 2020" I'm attached to it; The way you pull us into your world is what makes you Special....Kiddies Intro is so cute!!!!! Seldom we find writers who possess such magic in India.... and Thank You for making 'India' READ!!!!!!!!
Flipkart: If you were a guy I would have kissed you!!!! Hehehe... You all @ Flipkart are amazing! Chetan tweeted some 700 people from Fl...
READ MORE

With lots of hopes ,i'd ordered this book.Once booked i kept keeping a check on the shipping !! once received ,i'v read the book immediately ,but it was a huge turn off!! Even still i am confused ,what he was trying to say. is it that true love will be a failure or only professionally successful people are worthy of it or girls dont have brains to think and they will easily bounce to anyone anytime??:( ...CB had given a greater blow now..his two books one night at call center and 3 mistakes w...
READ MORE

Substanceless.. No Good.. Cliche'd.. run-of-the-mill story.. i want full refund of the money i paid for this book.. i don't even want to bother to rate the book.. but the site does'nt accept review if rating is not given.. so i m giving it a 1 star rating.. despite the fact that it deserves no star at all.. i found reading the book a waste of my precious time and would seriously appreciate a full refund of money..
READ MORE

Couldn't connect with the story.. characters were too shallow..it was like watching a masala movie. At the end one could guess what's coming! Could have made a reasonable movie script, but from the author of books like "five point someone", it's a huge disappointment.
READ MORE

a very surprised ending..totally taken back...

i should one of the best written by chetan bhagat ..i m very impressed with character goal who finally end the story by being the good man and sacrificing his love for just good of her and trying to bring the revolution by this..a very impressive character .....
READ MORE

Nothing to do with Revolutions

Its a bit disappointing that Chetan Bhagat had to use a catchy title to sell a book, and alas thats all to it. Its just a love story novel, but alas that part is also not well executed. There are some parts of the story where you scratch your head and are puzzled. I expected a much more well written and more convincing story from Chetan-ji.
READ MORE

Bed time stories are better than this

I have been hearing about Chetan Bhagat's books for the past couple of years from my friends but never really read one. Having seen so much hype about this book, made myself up to read one of his books for the first time and bought "Revolution 2020". My immediate impression after reading the book was "What exactly made him an acclaimed author?". Honestly, I see nothing fascinating in this book. I heard far better bed time stories than this when I was a kid.

I started the book with an enthu ...
READ MORE

why do people read this?

His books & latest bollywood movies go hand in hand,neither are worth reading nor watching.
Guys,there are better books which opens your mind to much better world.
Remember, this guys philosophy saying why everyone sulks in life etc etc.... & remember how he was out open wanting to gain attention & ego driven name for his contribution to the movie 3idiots!!!!
Really, these books are baby stuffs...no worth spending money for
READ MORE

It matters to be a good man more than a hero

Finished reading “Revolution 2020” by Chetan Bhagat.Though got the very first copy on d xact day f realese,bt finally removed the pack yestrday night only.
Different,one for the youngsters specially,yet the ending can b guessed frm d beginning,from d prologue.Bt Mr.Bhagat’s excellency lies in his treatment of the love triangle,his language,his description of moments so heart-wrenching(Gopal’s feeling abt the kiss behind the tree).Loved the book.Loved the character Gopal.Sometimes it becomes m...
READ MORE

not again.. its same all the time

*its a love story and there is IIT or IIM like always..
*we get it mr. Bhagat u went to IIM and IIT so did ur wife and fall in love there now keep that away from you books everyone dont go to IIT or IIM some go for NDA and MBBS too -_- ..
*idk his writings r just light ..
*u know "helki" writing. its like indian tv shows which our mums used to watch ..
*u skip couple of pages and ta da u still at the same point didnt miss anything at all :P

read 'fight club' or the LOTR or GOT or the ...
READ MORE