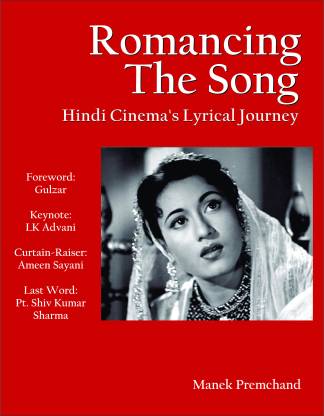 Lyric-writing came to films right away when talking films arrived way back in 1931. And much like a river it flows on even now, although the sentiments expressed keep changing as society changes; the lyric-writer is, consciously or otherwise, quite often in step with the life he sees around him.

Manek Premchand rows us through this wonderfully flowing river, taking us on this exciting journey, commenting on situations and stories of films with relevance to their songs, and interpreting their lyrics. He offers explanations of deep words and complex lines, and demystifies what is meant by ghazals, nazms, rubais, and more. He illustrates the analysis with loads of examples, and peppers this huge undertaking with dollops of wit and humour.

Romancing The Song is for those who love the Hindi film song, and even more, for those who are fascinated by the poem in the song.

Most writers are artists who only operate in the time and place zone in which they exist; as such, as society changes, the songwriter too more or less faithfully records these changes. Of course, sometimes he even influences changes, because life and art do mirror each other simultaneously.
Romancing The Song continually engages with songs and how they have changed, drawing parallels between lyrics too.

But will Hindi film music continue to be the social glue that it has been for so many generations? Or will it shrug off that role? In fact, with so many songless films being exhibited these days, does our film music even have a future? Romancing The Song explores all that and lots more, while staying focused on its mission of analyzing and appreciating great lyrics over the years.

About the Author
Manek Premchand was born in Delhi in 1950 and raised in Mumbai. He has a Bachelor's degree from Bombay University in Economics and Political Science, and a Diploma in Journalism and Public Relations.

He started writing in school and college on a variety of subjects, until he found his metier—writing about Hindi film music. His previous two books are Yesterday's Melodies, Today's Melodies, and Musical Moments From Hindi Films.

He has been a Consultant with Saregama India Ltd., besides being a show host on WorldSpace Satellite Radio, and All India Radio.

Because he is easily accessible, but also because he considers Romancing The Song as work-in-progress, he would love your opinions!

Having been a critical fan of Mr. Premchand's work, this book made me miss my first night of jet lagged sleep. On my way to Mumbai, I read a review of the book on a Jet Airways flight. I had to read the book.

This is truly a work of a genius mind. A mind which delights you in the way the book is set about, the way the words are played with, and the tribute that is offered to that one thing that made Indian Cinema a worldwide phenomenon - the lyrics.

One of its kind, this book will not be le...
READ MORE