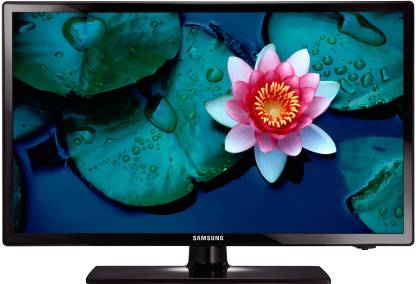 Get notified when this item comes back in stock.
Home
Home Entertainment
Televisions
SAMSUNG Televisions

Televisions these days have become an appliance that every household has. From the more common CRT televisions, to expensive Plasma flat screens and LCD displays, you can be sure that almost every house has one. Samsung is just one such brand that constantly strives to improve on the technology and features that they incorporate into the televisions they design and manufacture.

This flawlessly designed television from Samsung hails from the 4 series of the brand and aims to be your one-stop-shop for all your entertainment needs. Equipped with an LED display, the 32 inch screen features a resolution of 1366 x 768 pixels that can play your favourite Oscar winning movies as well as Emmy winning TV shows in high definition.

The HD Ready Samsung UA32EH4000 television is also equipped with Samsung’s patented Wide Colour Enhancer Plus to improve on picture clarity and viewing angle. The advanced picture quality improvement algorithm is used to uncover hidden details and give you a wider and deeper spectrum of colours.

In addition, the 32 inch Samsung LED HD television features the Vesa Wall Mount Support that equips you to take the 5.7 kg television off a table or stand and stylishly place it on the wall. This feature, coupled with the classy narrow bezel, undoubtedly adds a touch of sophistication and class to any TV viewing room of yours. The UA32EH4000 television from the 4 series of Samsung is also equipped with Triple Protector technology that prevents the television from being affected by electrical surges, lightning and excess humidity.

The Samsung television really does give you a viewing experience that would be very hard to forget. The designers of the 4 series Samsung UA32EH4000 LED 32 inch HD television have equipped it with state-of-the-art picture boosting technologies like a Digital Noise Filter and a 50 Hz Clear Motion Rate. What these features give you is a crystal-clear and undistorted flow of images when viewing fast paced action thrillers or graphics demanding console based games.

Adding to your surreal motion picture experience is the amazing sound field that the Samsung television creates through its 2 built-in Down Firing and Full Range speakers. Featuring the latest sound technology like Dolby Digital Plus, Dolby Pulse and SRS TheatreSound, the entertainment system produces 20 W of total speaker power output RMS to keep you captivated and immersed in the action for hours on end.

If you often find yourself annoyed by the repeated movies your cable operator and set-top box keeps airing, the video enabled USB 2.0 port that the Samsung 32 inch TV is equipped with enables you to connect and play just the kind of media content you like. Furthermore, the television also features 2 HDMI ports that enable you to connect appliances like an Xbox or Blu-Ray player. Especially if you have a gaming console, the television's Game Mode combined with the HDMI port should have you mesmerized and completely immersed in the video games you play.

In addition, there are also a host of other ports to meet just every one of your connectivity requirements. For example, the television includes a Composite Video Input, a Component Video Input, a Digital Audio Output (Optical) and a headphone jack that can be used at nights when you don’t want to wake up the family.

Whichever way you look at it the 32 inch LED HD Samsung TV makes for an extremely efficient and value-for-money buy, and is sure to keep you thoroughly entertained through movies, television shows and HD gaming experiences, for many years to come.

Watch movies from your USB

With ConnectShare Movie, simply plug your USB memory drive into the TV and instantaneously enjoy movies, photos or music. Now, you can experience a wide variety of content in the comfort of your living room on your TV.

This TV set is protected from lightning strikes up to 15KV, power surges up to 750V and humidity.

I bought this TV 10 days ago in Chennai. Nice entry level LED tv from samsung. It supports all the video format and the Picture and sound quality is good enough. Timing delivery from Flipkart..........
READ MORE

I bought this tv two weeks ago and let me tell you it has best pic quality and rocking srs theater sound and it is best deal you can get in any 32 inch range of any brand.
Firstly, I was going for Panasonic and LG because they use IPS display panel then after lots of survey I came to the fact that the S-UVA panel used by samsung has better image projection and Sony uses the same panel.Though, for Sony I would have to pay an extra 6-7 grand.
READ MORE

Bought this TV 2 days ago..amazing picture quality...sound is good..it can read HDD 500GB in 3 secs...plays almost all video formats..nice entry level LED tv from samsung...better than sony in some aspects as far as video format support is concerned..
READ MORE

I owns this TV for a month now, I did not buy this from Flipkart.

really amazing clarity..pc connectivity ,support almost all media format..go 4 it guys..sound is also as per requirement.portable hard disk read & u can play movie in hindi also if ur movie in dual audio...
READ MORE