When buying a high-end television, there is undoubtedly a lot you would expect from it. From a picture clarity that would knock your socks off to a plethora of features like internet connectivity, social networking and seamless integration with other supporting gadgetry, there are numerous factors that all add up to give you the ultimate home theatre entertainment experience. Samsung is just one such high-profile brand that manufactures such fine products and the UA46ES5600R television from the 5 series is, by far, one of the perfect examples.

Designed with some of the latest technology and features, there really isn’t a comparable product out there that can match the viewing experience that the Samsung 46 inch Full HD television delivers. The foundation of the premium viewing appliance lies in the state-of-the-art LED 1920 x 1080 pixel screen. Making use of the exceptionally well-engineered screen, Samsung designers have equipped the television with various brand patented technologies that boost clarity, performance and colour perception.

When it comes to performance, one of the key features that make everything else possible for the Samsung Smart TV is its ability to connect online, wirelessly. With the built-in wireless LAN feature, you can post messages or write on walls of your favourite networking sites like Twitter and Facebook, Skype with family hundreds of miles away in widescreen high quality as well as simply browse the web for delicious recipes when you crave a little flavour and spice come lunch time.

To top it all, the LED television from Samsung is equipped with another patented technology of theirs, called Triple Protector. What this extremely neat feature gives you is the ability for the TV to remain fully operational through electrical surges, lightning storms and excess humidity. Well, perhaps you have greater chances of winning the lottery than your Samsung television being struck by lightning, but you can never be too careful when it comes to electrical surges and those odd times when your maid thinks that the best way to get those spots of dirt off the display, is with a little good-old-fashioned soap and water.

Delivering a viewing experience like none other is what the LED Samsung TV is all about. Equipped with top-of-the-line patented technology like Wide Colour Enhancer Plus, while coupled with a Digital Noise Filter and a 100 Hz Clear Motion Rate, the television produces images and undistorted motion picture sequences with impeccable clarity and refinement. Furthermore, equipped to view the most captivating digitally enhanced motion pictures like Avatar and The Lord of the Rings in Full 1080p HD, the incredible 46 inch LED television truly does take texture definition and realism to a whole other realm.

Backed by sound technology from one of the best sound specialists in the business Dolby Laboratories, the quality of audio that the Samsung television produces is certainly on par or if not exceeds the already exemplary standard of video quality that the 46 inch display has set. The 2 built-in speakers make use of Dolby Digital Plus and Dolby Pulse along with SRS TheatreSound HD to have you as captivated aurally as visually when you tune in to watch movies like most from the James Bond franchise that are noted for their Oscar winning background scores and sound effects.

Designed to be the ultimate tool for your entertainment, the 5 series Samsung television features 3 HDMI ports and 2 USB ports that help sync and view your favourite content in Full HD. If these simply won’t suffice, AllShare Play and cloud computing is just what you need to wirelessly sync your content to compatible devices in the vicinity as well as stream and share multimedia through the Samsung web storage feature. The undisputed technological prowess of the Full HD Samsung Smart television is surely a force to be reckoned with; and with its range of features and patented technologies, it very simply may just be – The One.

Bring it all together. AllShare Play wirelessly connects to compatible devices through DLNA technology so the movies, photos and music stored on them can be viewed, listened to and shared on your TV. Now, effortlessly transfer content from your PC or mobile device to your TV.

Watch movies from your USB

With ConnectShare Movie, simply plug your USB memory drive into the TV and instantaneously enjoy movies, photos or music. Now, you can experience a wide variety of content in the comfort of your living room on your TV.

Using an advanced picture quality improvement algorithm, Samsung's Wide Colour Enhancer Plus drastically improves the quality of any image and uncovers hidden details. Now see colours as they were meant to be seen. 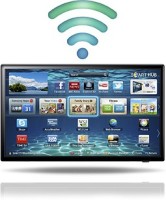 A TV prepared for surges, lighting and humidity

Ensure you can enjoy your entertainment without worry, whatever your environment. Thanks to the Samsung TV's Triple Protector, your TV is designed to maintain operation even in the most challenging or unstable conditions. The robust enhanced inner circuit is protected against electrical surges and lightning as well as humidity. Choose a television that can cope with difficult conditions so that you'll be able to enjoy great viewing without inconvenience.

Discover a new world of social and personalised home entertainment with Samsung's updated Smart Hub and three great new services. Family Story lets you share special photos, messages and events with loved ones. Meanwhile, children can stay entertained and educated with the Kids feature. You can also exercise and manage your training using Fitness. With access to great content as well as a selection of Samsung Apps, web browsing, Skype and more, this is the ultimate family home entertainment experience.

Stay in touch with friends and family from the comfort of your home thanks to the Skype app for Smart TV, available for free in the Samsung App store. Combined with the separately-sold Skype camera kit, it allows you to make high-quality widescreen video calls to loved ones throughout the world at low rates or even for free. You can create new Skype accounts, access existing ones and navigate using your TV's remote control. Be closer with face-to-face communication.

Enjoy Thanks to a resolution twice as high as standard HD TVs, your Samsung Smart TV delivers a breathtaking viewing experience that takes you beyond the screen into a world of total immersion. When you've seen the rich and vivid texture of Full HD images, your favourite TV programmes and movies will never be the same again.

Make the most of all your content and devices with wireless sharing. Thanks to AllShare Play, you can stream movies, photos, music and more from any compatible devices nearby, including PCs. Cloud technology and Samsung web storage give you even greater freedom and mobility, allowing you to access and share multimedia when you're away from home, too.

Samsung's Clear Motion Rate is able to generate clear, moving images through a combination of three factors: chipset, TV panel, and backlight. This new measure in motion control produces the clearest motion graphics through the backlight technology in the TV's panel.