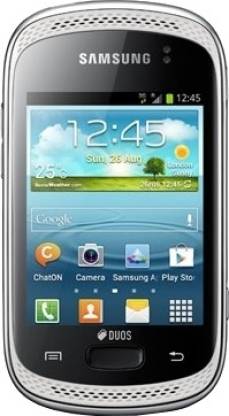 The smartphone revolution is here and Samsung ensures that it reaches even the grassroots, so that no one feels left out. The Samsung Galaxy Music Duos S6012 comes under the budget Android category and strives to bring the best of features with no compromise on performance. The candy bar dual GSM SIM phone from Samsung runs on Android v4 (Ice Cream Sandwich), has a TouchWiz UX user interface and is powered by a 850 Mhz Cortex-A9 processor backed by 512 MB of RAM.

The Galaxy Music Duos sports a 3 inch capacitive QVGA LCD screen that has a resolution of 240 x 320 pixels and a color depth of 262 K which makes for clarity and better colors to the eye. The device has Java installed on it.

Capture any random moment you want, anywhere you go with the 3 megapixel primary camera on the phone that can record videos as well at 25 frames per second; never let life pass you by without a memory of the most precious moments. The phone is equipped with touch and auto focus to help you take better pictures.

This Samsung device is designed to let the users have it all with functional design and versatile features. The phone provides a wide variety of connectivity options; internet is just a tap away through either the GPRS, EDGE or the quick-as-lightning 3G networks. Seamless connectivity is in your palm with the Wi-Fi on the Samsung Galaxy Music Duos; turn it into a modem by using a Wi-Fi hotspot to tether it. The phone comes with a microUSB and bluetooth as well to make data sharing easy and it sports DLNA as well.

The Samsung Galaxy Music Duos S6012 is powered by a Li-Ion 1300 mAh battery which can give you up to 15 hours of talk time on any 2G network. The phone has an in built memory of 4 GB for all your files, music and media which can be extended up to 32 GB with a microSD card of your choice.

This phone excites music lovers with its optimized music player interface. Dual front-speakers deliver awesome sound quality that's bolstered by advanced audio features and enhancements. You can also tune in to the local, FM radio stations with this phone. Music and gaming hubs, along with ChatON messaging, offer abundant entertainment options. An advanced Android OS and a strong processor ensure a seamless performance. Add quicker downloads, a large memory capacity and Wi-Fi connectivity to the formula, and you have a device that pretty much has it all covered.

Keep in touch with "ChatON"

Take advantage of the pre-loaded ChatON app for free and easy messaging. Now you can network with friends and conveniently share multimedia.

Thanks to this feature, you'll be able to stay connected with your professional and personal calls at the same time. You'll have the luxury of choosing between two SIMs for a stronger signal, or more suitable rate. You can also answer a call while you're on call on the other SIM. Make things more economical by using a more affordable 3G data plan on one SIM while using a pocket-friendly call plan on the other. With the advanced dual SIM feature of the Samsung Galaxy Music Duos, managing your life and your calls get so much easier.

Equipped with an advanced Android operating system, the Galaxy Music Duos provides an optimised UI for music features. A fast and powerful processor delivers an impressive performance, whether you're listening to music, using multimedia apps or playing games. The large memory space can accommodate all your favourite data and content. Enjoy faster downloads with rapid transfer speeds and excellent connectivity via Wi-Fi for easy web access.

HERE IS THE SOLUTION FOR DISABLING MUSIC BUTTON

- As other buyers stated MUSIC BUTTON IS ANNOYING

*the button works even when phone is locked,accidental presses when you take from your pocket will result in resuming playback of last played file.

READ BELOW ONLY IF YOU ARE WILLING TO DO THE STEPS AT YOUR OWN RISK AND RESPONSIBILITY FOR WHATEVER HAPPENS TO YOUR PHONE.

THIS IS NOT REAL DISABLI...
READ MORE

This is a very nice mobile and this is a perfect mobile for me as a music lover ,
white color mobile gives a nice rich look than blue or orange coloured mobile ,
wifi ,3g and gprs has a nice speed in surfing or downloading ,
No other samsung mobile gives nice audio experience than this mobile as it contains SRS Surround Sound, SoundAlive Solution ,
camera is very nice , audio through speaker is loud with clarity ,
battery backup is nice and better than y duos in this price range ,
Touch i...
READ MORE

1. phone doesnt hangs, but some time lags(common in this range)
2. price is really good as far competitors are concern cheapest in all (sony tipo , htc desire c)
3 . It had Gps with Glonass ( no company one has given in this range phones)
4. camera is good has touch focus
5. best thing abt this phone is its dual stand by but when acts as active like if u r on sim one and u got a call on 2nd it wont tell the caller than its out of reach instead it will tranfer...
READ MORE

just a OK phone. Not for music or dual SIM

This phone is just a hype. Main difference is with respect to Music and Dual SIM feature both are sub standard.

1) This phone is not actually Dual SIM active. Dual SIM standby/active should handle call in a SIM when the other SIM is on a call which is not happening in this model, same for samsung Y-duos-lite 5302. You have to enable call forwarding which is operator dependent and comes with a price.

2) Even though its a music phone, the package sans a good in-ear earphone rather it is ship...
READ MORE

Best phone in this Range

I have used this phone, it works well.. Nice features have been given, Music clarity is good,, Video resolution supported by this phone is better than Galaxy y. One problem - ie.. The screen light blinks simultaneously whether it is locked. Look is also GOOD!!!!!!!
READ MORE

This is the phone in the indian market
Just like an iPod Touch with mobile
super games free
ICS waht else do we need?
This is the best smartphone under Rs 9000
Dual sim
READ MORE

This was my first mobile purchase from online shopping and am impressed by FLIP CART for their Delivery and step by step shipping details. I ordered on 06 July and got the product on 10 July (inducing Sunday) packing was superb totally this was a wonderful online shopping experience with "ONLINE MEGA STORE". thumbs up for u guys. Keep it up..

The phone is really great and does serve good battery life.
The phone supports nearly all apps and the screen size is decent.
The music button plays music even when locked but that is not of a big concern if you turn media volume 0 when not in use.
Overall a very nice phone.
READ MORE

Good phone in this price range...

I Brought the phone when an offer was going on... i cost me Rs 4769.. It was quite economic according to the price... for the first time user of android this is a good phone to choose.. as it is having android 4.0.4(ICS)... Even the phone is not dual core but it doesn't hangs with this android version... if u r a gamer or play high-end video.. it is not good for you..screen size is also good 3 Inches.. for those who don't like big screen phones... iwould rate 4 out of 5.
READ MORE

1
0
Permalink
Report Abuse
+
All 103 reviews
Have doubts regarding this product?
Safe and Secure Payments.Easy returns.100% Authentic products.
Back to top