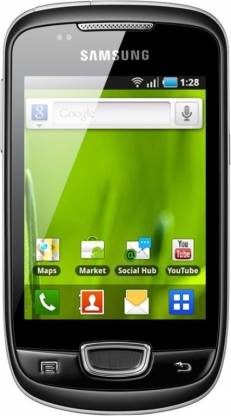 Description
The Samsung Galaxy Pop is a full touch phone, ideal for those who have just joined the party of touchscreen handsets. The Samsung S5570 is powered by a 600 MHz ARM6 processor and runs on Android 2.2 (Froyo) operating system. The mobile promises productivity and performance at great value for money.

The Galaxy Pop S5570 features a 3.14-inch screen with 240 x 320 pixel resolution. The candy bar shaped phone works both in 2G and 3G networks. The Samsung device is preloaded with social networking apps like Facebook, Orkut and Twitter, ensuring you are always connected to your friends, no matter wherever you are.

There is a 3 megapixel camera loaded in the Galaxy Pop that lets you click pictures and share them immediately with your friends. The camera comes with 3x digital zooming and video recording capabilities. You can shoot videos with resolution of 320 x 240 at 15 fps.

The Samsung Galaxy Pop has a compact design with striking color band around the sides, top and bottom, that lend the phone a sophisticated look. The phone weighs 106.6 g and measures 60.6 x 110.4 x 12.1 mm. The handset has a TFT screen with support for 256 K colors. The S5570 comes with an accelerometer for auto rotation and proximity sensor for auto turn-off.

The Samsung S5570 comes with 164 MB memory onboard. You can expand the phone memory externally by using a microSD card for up to 32 GB. A standard Li-Ion 1200 mAh battery is used in the phone that gives a talk time of 9 hours in 2G and 6 hours in 3G network. The phone book and SMS memory will depend on how much memory is loaded through the microSD card.

The mobile phone uses Android browser to surf the Internet, to which you can connect through GPRS, EDGE, 3G and Wi-Fi. Connectivity options in the Galaxy Pop include Bluetooth, microUSB and a 3.5 mm audio jack. The Document Viewer and Editor let you view/edit your documents on your phone via Quickoffice. The Samsung device is integrated with A-GPS to ensure you go in the right direction. Additionally, the Samsung Galaxy Pop has access to several apps on the Android Market.
Read More
Product Description
The Galaxy Pop embodies great productivity and performance in a compact design that is full of personality. The Galaxy pop is perfectly-sized for easy mobility, featuring an ergonomic comfort. The Galaxy Pop might be compact, but it is capable of doing a lot. Packed with Google Mobile Services that let you do more on your mobile, the mobile comes with easy access to Gmail, GTalk, Google Maps and more. Keeping in touch has never been easier, especially when the Social Hub is in the palm of your hand. A gateway to social networking sites, instant messengers and more, the Galaxy Pop brings the entertainment-universe to you. Wi-Fi connects you to the Internet from anywhere. Write messages faster and more conveniently with a continuous motion of the finger by connecting the dots to write text instead of pushing of buttons one at a time. A strong 600 MHz processor can handle the multitasking of various applications. Take a picture with the 3 MP camera and share on SNS right away.
Welcome Party for Smartphone Rookies

The Galaxy Pop embodies great productivity and performance in a compact design that is full of personality. Featuring a flashy colour stripe along the side, this mobile keeps you connected to all that matters in your life. Enjoy the convenience and familiarity of Google services built-in to the mobile. Find your way with GPS navigation and location-based services. Foster friendships via mobile social networking. The Galaxy Pop is the perfect foray into the amazing world of Samsung smartphones.

Show Off Your Identity

The Galaxy Pop is perfectly-sized for easy mobility, featuring an ergonomic comfort. The bright colour strip on the side makes a flashy statement and lets you know you're in for a good time. Bold and striking, the mobile commands attention and lets everyone know exactly what kind of person you are.

Do More On Your Mobile

The Galaxy Pop might be compact, but it is capable of doing a lot. Packed with Google Mobile Services that let you do more on your mobile, the mobile comes with easy access to Gmail, GTalk, Google Maps and more. Enjoy the services you depend on directly on your mobile. And with access to over 100,000 apps on the Android Market, there's no limit to what your mobile can do.

Keeping in touch has never been easier, especially when the Social Hub is in the palm of your hand. A gateway to social networking sites, instant messengers and more, the Galaxy Pop brings the universe to you. Surf the Web with Wi-Fi, and use the fluidity of SWYPE to compose text with ease. Worried about depleting the battery? No need to - the powerful battery lasts longer letting you do everything you want while still having energy for more.

Wi-Fi connects you to the Internet from anyplace that has a wireless internet signal.

Write messages faster and more conveniently with a continuous motion of the finger by connecting the dots to write text instead of pushing buttons one at a time.

The strong 600 MHz processor can handle the multitasking of various applications.

When you want to listen to music, just plug in your headset to the Samsung Galaxy Pop. The 3.5 mm ear jack fits most regular earphones, headphones and portable speakers.

Take a picture with the 3 MP camera and share it on SNS right away.

Easily the best phone compared to many of it's generation!

I bought this phone on Oct 6th 2011..! Yup.. it's been two years and i'm more in love with this phone than ever before.
For those who actually understand about Rooting and Custom ROMs, this is a beautiful phone..! Got problems with the phone in the first year. Then i began Rooting and installing Custom ROMs, it's smoother than ever since then. Lots and lots of support by Developers for this phone.
Well, it's not worth the price in this present market scenario, but yeah.. Wanted to show gratit...
READ MORE

My Best Friend Since 2 years!

I bought this phone on June 2011 and this was my first phone. And it's been the best! Trust me. I know it is now a old model, but the features they provided were far more awesome! Many similar phone like pop came..but nothing could beat this! It's been a flawless phone ever since then. Yes like any other handset, this phone too got crazy sometimes, and sometimes due to my callousness I had to reboot but apart from that THERE IS NO OTHER COMPLAIN. It's been an amazing mate.
So easy to access...
READ MORE

I am been using this mobile since 2011. So far it's been a great companion to me. And it's an excellent phone with great robustness.

I have spended only 200 Rs so far for its repair .

Pros: ( As per the year 2011)
1. Excellent for first time android users . However its been outsmarted by the new generattion mobiles.

2. Highly Endurance , I have thrown this mobile couple of times. Still it works sweet

I am still wondering!!

I bought this mobile few month back from local market. and I don't have much time to play with my mobile. but while using for almost one month i observed few things.

Network: horrible1 u don't know when ur network get out of range.no signal appear in ur mobile and we have to switch of and on.

Camera: Good during day time. but worst at dark place no flash at all. I don't know it can be fixed or not.

Appearance: It looks exactly like Samsung Corbey which is cheaper then Sams...
READ MORE

My first Android- galaxy pop mini- bought after hell lot of research and even after three years it feels great to keep such a smart phone.
I always say about it's shape and back cover design--it's my BMW--no phone in the same series could beat it later--no Y no Z. However, now it's getting older as V 2.1 is not supported by many apps. Well, i can say it was the best buy of that time. Thanks pop mini :-)
READ MORE

great phone for a normal user .

had a great experience using this phone . it's been 2 yrs with the same phone with no issues. have all the upgraded apps and features. can be a good deal in this price.
READ MORE

I have been using samsung galaxy pop for three years and find no defects till now . Its perfect for money spent .

Weighted good so that men keep in their jeans pocket. Assured for non -breakable .

Buy it for Yourself . Dont compare with other Hi-fi smart phones . This is great with less cost for middle class people
READ MORE

A good smartphone under budget, I am using it since 1.5 years

Overall a good phone. In 1.5 years it didn't gave much problems in general phone utilities like sound, mic, music, internet. Everything is working fine.

But few cons are there.

2. Getting hanged sometimes and needed to reboot.

A SOLID POP FROM SAMSUNG

An excellent quality product from SAMSUNG mobile series! A strong phone, very much durable! I am using this mobile from November 2011, till now, I have not faced a single problem! Easy application installer, good processing speed, good camera quality, excellent loud speaker, highy intelligent, SMART! I am very disappointed as the production of this model has been stopped due to the GALAXY Y craze among people, this was perhaps the best model released so far from SAMSUNG, the range lies betwee...
READ MORE

0
0
Permalink
Report Abuse
+
All 36 reviews
Have doubts regarding this product?
Safe and Secure Payments.Easy returns.100% Authentic products.
You might be interested in