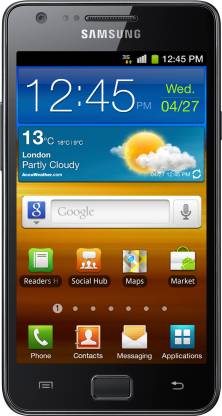 Description
The Samsung Galaxy S2 I9100 is the much anticipated successor to the hugely successful Galaxy S I9000. The S2 runs Android 2.3 Gingerbread OS which brings in quite a few useful upgrades over the Froyo, including an improved copy/paste function, revamped App Manger and more spaced-out keyboard. Samsung has overlayed the stock Android interface with its TouchWiz 4.0 UI that brings in 3 new hubs and a few aesthetic enhancements.

The Galaxy S2 is powered by a 1.2 GHz ARM Cortex A-9 Dual core processor that renders the phone extremely quick and one of the fastest in the smartphone realm. The faster core speeds allows the I9100 to deliver high-speed multitasking, faster web page loading, and a slicker UI experience. The enhanced encoding/decoding ability of the phone supports smoother full HD 1080p video playback and enhanced HD gaming.

The 8 megapixel camera on the Galaxy I9100 supports full HD video recording at 1080p resolution and is flanked by an LED flash. There is also a front facing 2 megapixel camera for video calls. Samsung has thrown in plenty of manual controls like ISO adjust, choice of three metering and multiple white balance options. Other camera features include Smile Detect, Panorama, Face Detect and a Macro Mode.

The Samsung Galaxy I9100 sports an ultra-thin 8.4 mm chassis with smooth curved edges. The S2 features a unique Hyperskin mesh back panel which gives added grip and prevents the phone from heating up during extended calls.

The WVGA display on the Galaxy I9100 packs 480 x 800 pixels and supports 16 million colors. Apart from the usual triad of accelerometer, proximity and light sensors, the Galaxy S2 I9100 features magnetic and gyroscope sensors that detect dynamic hand and arm movement to deliver an enhanced gaming experience.

Despite its slim form factor, Samsung has managed to cram an impressive 1650 mAh battery into the Galaxy S2. The Lithium Ion battery can go unplugged for up to 18 hrs minutes on 2G and up to 8 hrs on 3G networks. The Galaxy S2 I9100 comes with 16 GB of internal memory and supports up to 32 GB microSD cards.

The S2 19100 supports 3G, GPRS , EDGE and Wi-Fi connectivity. The mobile supports DLNA and high speed Bluetooth v 3.0 connectivity for media sharing and comes with a micro USB port for sync and recharge. The Galaxy S2 features an intuitive Voice Command feature that allows hands-free execution of all major functions like calls, texting, launching apps and music control with the ease of a voice command.

The S2 is preloaded with the Readers Hub app which gains you access to over 2 million book titles and 2,500 magazines in 16 different languages. The Social Hub integrates various social networks like Facebook, Orkut and Twitter into a single feed. The Galaxy I9100 can organize and synchronise contacts from multiple networks into a single streamlined phone book.

The Galaxy S2 is optimised for secure access to enterprise resources on a Microsoft Exchange server. This allows you to stay up to date with your business email, calendar, contacts and task synchronisation.
Read More
Product Description
.
10.92 cm (4.3) SUPER AMOLED Plus

The Samsung Galaxy S II has a 8.49-mm-big, slim form factor, a luxurious design and an easy grip. The Galaxy S II also features HyperSkin which provides a premium metal look with a fingerprint-free and non-slip battery cover.

Just double tap the home key and you can control the Samsung Galaxy S II with a few selected words. Take charge and execute major functions like calling, music, messaging, scheduling and launching apps with simple voice commands. You can also capture your thoughts, make a note to yourself and send it to your friends by simply saying send.

Organize and synchronize better, all in your online contacts, through the Social Hub. Streamline your email, SMS, IM and SNS information into one unified box,and interact faster with more people in the way you want to. 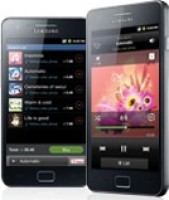 Samsung's native music player provides an intuitive playback system to search, discover, preview, purchase and download tracks on the go. The app will also provide rich information on purchases, with access to most artists, lyrics and reviews you desire. Get recommendations for new tracks and add to the excitement with bass enhancement and 5.1 channel sound.

The 8 MP auto-focus camera doesn't miss any details, whether you're shooting something that's idle or in action. Take beautiful, detailed photos even in low-light conditions with the built-in LED flash. And thanks to the much improved user interface of the Android Gingerbread OS, fast scene switching is possible. You can also quickly switch to the 2 MP front-facing camera which makes self-portraits a snap away.

Optimized to securely access enterprise resources on a Microsoft Exchange server to stay up to date with your business email, calendar, contacts and task synchronization, the Samsung Galaxy S II boasts the most comprehensive mobile implementation of Exchange ActiveSync. It allows for real-time communication with employee phones to remotely configure settings, monitor compliance with policies, guarantee synchronized data safety and wipe or lock managed phones.

The Samsung Galaxy S II has adopted Cisco's AnyConnect to provide reliable and easy-to-deploy encrypted network connectivity by delivering persistent corporate access for users on the go. Whether providing access to business email, a virtual desktop session, or other Android applications, it enables business-critical application connectivity. 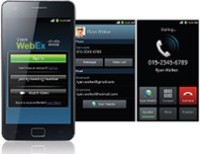 Stay on the same page and stay connected for important meetings on the go. With Cisco WebEx support, a secure, online meeting is just a click away. Users can view shared desktops, browsers, applications and documents with live annotations and feel the experience of deep integration with the Samsung Galaxy S II's exclusive feature to initiate a WebEx meeting from the dialer and contact's screens.

The Readers Hub is a great place to flip through your library of classics or browse for best sellers with over two million to choose from, but you'll also be able to set up some 2,500 magazines in 20 languages and 1,600 of newspapers in 47 languages for delivery. Crisp, sharp text makes reading a pleasure and easy to manage, with magnify, text only and page views, audio access, and more as well as you can one touch share via email.

The Samsung Galaxy S II's Game Hub lets you download high-quality games, providing 12 social network games and 13 premium games including Gameloft's Let Golf 2 and Real Football 2011. It allows you to search for games and new release information. With an accelerometer, a magnetic sensor and a gyroscope sensor, this phone ensures that dynamic hand and arm movement games can be enjoyed to the fullest.

Drop the apps and get direct access to your content through Samsung's new customizable UX, a magazine style layout that selects content that you use the most - gallery, music, video, SNS, email, notes, games and weather info, displaying them on your main screen. This live content ecosystem can be customized to your taste and provides easy access to your content. It updates in real time with all the information you desire from Music Hub, Readers Hub and Game Hub.

Play it safe with a security solution that enables the protection of mobile data without the need to sacrifice speed and functionality. The Samsung Galaxy S II is an Android smartphone that has adopted powerful encrypted hardware, minimizing the use of security software and applying encryption technology to the hardware itself, greatly accelerating security protection and achieving superior performance. Sybase Afaria Mobile Device Management and Microsoft Exchange ActiveSync complement the encryption support with their own mechanisms to secure important corporate and personal information.

For all those who have the Samsung Galaxy S2

Those who have I9100G - Well I have nothing to say, but you just ended up in the wrong side of the table. I don't want to say anything about this model.

Those who own Galaxy S2 I9100 - This is the best DualCore smartphone that you can look out for. The only problem is the battery backup. But again, there are many ways to improve it. I customized in such a way, that I get 1 entire day battery backup with norma...
READ MORE

the phone is amazing and comes with excellent flipkart service`

amazing and really after charge hope it will stay more

Perhaps the first phone I purchased solely on reading reviews; I usually take the time to check out working models of any phone I purchase and here's my feedback on this device after using it for 6 months:

Please read before you buy!

This is the best phone YOUR money can ever buy.

First of all to all the users who are crying about the phones performance and battery, it is always advisable to get a little research done before you put in your money. We no longer in 80's and 90's when there were no tools available. Use the WORLD WIDE WEB a little rather and spending time behind comparing prices on other retailers.

Talking business...
I will try and talk as much as possible in a COMMON MAN's language.

I have been using th...
READ MORE

I wanted to buy a phone which will last me for atleast 2 years in this ever changing world of mobile te4chnology and this handset caught my eye.

This phone is a wonder. I bought one this may and I am using it continuously throughout. The battery backup is powerful for a phone that packs that much hardware.

User who complain about the heating problem should know that a phone which has such powerful hardware and no heat outlet will heat.

The display on this phone is wonderful, watching a m...
READ MORE

awesome phone ....but do u really want it

but u know what... only after i go hold of this... i asked myself a question.. did i really need all these features ? actually NO !!!

a humble request to all... first think if u really want these features..

but otherwise.. this is awesome
READ MORE

For all those who likes galaxy s2 , but is worried about its looks and display resolution

Sony xperia was always my 1st preference , as i wanted good display , cam and sound....
but i found a lot of negatv reviews abt after sales support of sony and some have non removable battery(xperia p , s )...others have touch screen problems (xperia u)

so i turned to samsung , which does n't have all these problems...galaxy s2 was the one which i liked the most... the only problem i found in it is its looks and display resolution....which was quite less compared to the xperia phones...

I Have Received this phone before 2 days, it looks awesome.First i have decided to buy S3, then i changed my mind to go with s2 itself. there is not too much difference between s3 and s2.
The phone came with android 4.0.3 installed and its very smooth.
Everything is fine in this phone and no lag found.Played some HD games, everything works fine.
Battery life is the only concern. Still manageable for 1 day use.
This phone also receives jellybean android 4.1 update on November(Confirmed by Sams...
READ MORE

Wanted to upgrade from my HTC Legend, which was one of the handsomest phones of its time. A good performer too until it's touch screen went bad and I found out that HTC service is not very accessible.
Waited for the latest Androids like HTC one series and the Galaxy S3. However it seems to me they have been priced around Rs.10000 more that they should be. Hence I opted for Galaxy s2, which according to reviews and specs is still one of the best phones around. The S3 and One X may be better p...
READ MORE

3
0
Permalink
Report Abuse
+
All 220 reviews
Have doubts regarding this product?
Safe and Secure Payments.Easy returns.100% Authentic products.
You might be interested in