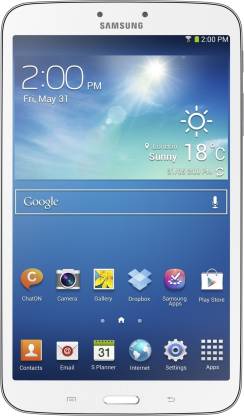 The Samsung Galaxy Tab 3 T310 is finally upon us, with the updated Android OS and a high quality 5 MP primary camera. The device is a well designed rectangular shaped tab with rounded edges.

It is a device with a powerful enough processor that puts out a clock speed of 1.5 GHz and consists of a Dual Core chip setting. The graphics in the device is powered by the Mali-400MP chip and this supports all the popular games in Google Play market, except those compatible with only certain graphics chips. The 1.5 GHz Dual Core processor is also capable of good power management thanks to the split cores.

The phone runs on the Android v4.1 Jelly Bean OS. It is a smooth and fluid OS with Samsung’s own User Interface. The system is supported by RAM of 1.5 GB, allowing for ample multitasking capabilities. The system also comes with an internal memory of 16 GB, supported by an expandable memory slot that can hold a 64 GB microSD card as well.

The screen size in the Tab 3 is massive, with 8 inches of TFT Capacitive Touch Screen area, supported by 1280 x 768 p resolution. The screen supports Multi Touch which is useful in taking advantage of many of the v4.1 features that Android has.

The Camera in this white Samsung Galaxy Tab 3 T310 has a Sensor that supports 5 MP for quality photos. The tab also comes with a 1.3 MP secondary camera. The device is WiFi enabled as well. The camera is also capable of HD Recording at 30 fps.

The battery in the Samsung Tab 3 T310 is a massive 4450 mAh Li-ion cell. It can also be connected by a Micro USB 2.0 port. It consists of Bluetooth as well.

This is the best tablet if u want to buy a 8inch tab under 15k.I am a gadget freak n believe me after reviewing lot of tablets for days...i found this one to be the most value for money...n thnks to the flipkart delivery service got it in 3 days.Im using this tab nonstop for 3 days now..installed many hd games n apps.. all run flawlessly..thanks to the Exynos processor and 1.5 gb ram.Plz dont go for any cheap china branded tabs in the market..rather u give that money to a Child Welfare Trust....
READ MORE

Good but not awesome

After reading the specs i am not exicted about it because it has only some upgrade from the previous tab that is tab 2 and it has a dual core processor not a quad core processor and the display is also not impressive but on the plus side it has the latest android that is 4.2.2 (jelly bean) it has a IR blaster that will help us to control tv if we are unable to find our tv remote and it is also very light in weight and the camera is also improved from the previous tab so overall is a good tabl...
READ MORE

Excellent tablet at this price. No voice calling but its not practical to carry this around like a mobile. Suited for use within the house. Wifi works excellently. USB can read from pendrive. 1080p movies play faultlessly. Good for moderate gaming too. Charger is very good fast charging and battery life is quite good if you don't use speaker with games.
Huge number of free apps available. Buy a good flip case and screen guard.
Overall very happy with this product till the next generation come...
READ MORE

Seriously .. skip ipad mini (poor display compared to this one; no mem. expansion; no bluetooth; compulsory itunes when connected to pc)..

The IR blaster worked even for my stone age onida tv !!

The OS is pretty neat.. 1.5GB DDR2 ram.. Used it for over month and it never hanged so far.

when i use this tab for first time.i really like the way it packed in my hand.
easy to use in one hand
Also very portable with its weight.

you wouldn't get any discomfort from this..

love to consider with price also..

for a better comparison go for
Nexus 7 2013(not availble now) and galaxy note 8.0(over priced)
READ MORE

It has been abt 5 mnths I have been using this tab.. its a great thing to have, uptil now I haven't faced any problem. Its performance also has been great be it gaming or surfing or watching videos its been great experince.. just miss the sim card sumtimes for using internet when i m not at home n installation of some applications like whatsapp..
READ MORE

This is an excellent tab with wonderful display. Works well for browsing, Skype video calls, youtube and so on.
READ MORE

Ok.. to start with.. first of all.. decide what is type of tablet u r looking for(wifi only or wifi with 3g).. well i have an ipad air, samsung tab3 7inch and now the 8inch also.. i felt among these 8 inch tab is best.. i love my ipad air.. but there are many things u cant do on an ipad that u can do on a tab.. best example torrent download.. among the tablets in market i felt this is the best (even nexus 7 is good though i dnt have it). The only thing i am little disappointed is the battery ...
READ MORE

The delivery was delayed by over a week but this is the first time I got something delayed from flipkart. Usually arrives well ahead of the scheduled delivery date. Bought it as a gift for my father and since it didn't arrive within the time I expected, so I give a 4 star. But other than the delay, good follow up by Flipkart and apologized for the delay.

The tab is an awesome product. Really enjoying it. Flipkart is a great place to buy great products. Do your research very well before buyi...
READ MORE

I didn't expect this much classy product from samsung for this price point.

It doesn't have any lag, Battery backup is good, Screen resolution is not great but good.

Camera is let down, but for this price point its acceptable and nobody is gonna use their tab for taking high quality pics. But Samsung shd upgrade the front cam, most of the people r gonna use tab for skype not for taking pics.

Another problem is bit heavy to hold.

Apart from that its a good buy
READ MORE

0
0
Permalink
Report Abuse
+
All 26 reviews
Have doubts regarding this product?
Safe and Secure Payments.Easy returns.100% Authentic products.
You might be interested in

Keyboards
Min. 30% Off
Shop Now
Back to top