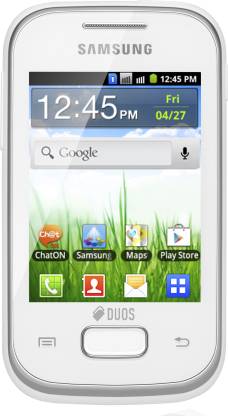 Samsung’s flagship Samsung Galaxy series has been manufacturing quality smartphones for some time now and with the Samsung Galaxy Y Duos Lite S5302, they do not disappoint. The device comes in a bar form and is run on the tried and tested Android v2.3 (Gingerbread) OS. The operating system is backed up by an active 832 MHz processor which ensures that applications run smoothly on the device.

The screen of this Samsung Galaxy device is a 2.8-inch LCD Capacitive touchscreen which provides a QVGA resolution of 240 x 320 pixels. The phone uses Samsung’s Touchwiz user interface which simplifies the user’s interactivity with the phone. The Samsung Galaxy Y Duos Lite S5302 also comes with a Smart Dual Active SIM functionality for users who require more than one SIM card for work and personal purposes. You can receive calls on SIM 2 even when you are already on a call on SIM 1. This smart dual SIM features also allows you to receive calls when you are using data services including web surfing.

The phone comes with a 2 megapixel camera which comes with useful features like Fixed Focus, White Balance, Multi-shot mode and Zoom which together contribute to enhance the usability of the device. The camera also doubles up as a video recorder to shoot videos of friends, family or fireworks at the local fair.

The Samsung Galaxy Y Duos Lite S5302 has a smart looking frame and has been designed quite stylishly. The mobile comes in dimensions of 58 x 103.5 x 12 mm which gives this device a slim and slender frame.

The phone comes packed with an internal memory of 4 GB which can store the multiple applications on the device. This Samsung Galaxy phone also comes with an expandable memory card slot which is capable of boosting the memory on the device by up to 32 GB using a micro SD card. 32 GB worth of memory is more than adequate to store more than 1000 audio tracks and a few movies as well. The phone is powered by a 1200 mAh battery for optimum battery life.

The device is highly capable of keeping the user connected to the Internet via the the 2G as well as 3G network. The phone includes GPRS and EDGE technology for the user to access the internet via the 2G network. For a faster browsing experience the device is also 3G capable. The user can connect to a wireless network in their vicinity using the WiFi capability in the device. Additionally, files and documents can also be exchanged between another device and this one using the micro USB port or the Bluetooth functionality. The phone is also capable of tethering to another device via the USB port or the WiFi hotspot function.

The Samsung Galaxy Y Duos Lite S5302 also serves as a navigation aid in the form of Google Maps which uses the GPS support. The phone is quite capable of keeping the user engrossed while travelling as it comes packed with a music player, video player and an FM radio. The device also contains Virtual 5.1 Channel Surround Sound to enhance the audio clarity for the user.

The phone also comes with additional useful features like Mobile Tracker, Task Manager and Voice recorder to make this device highly usable. Additionally, the device contains useful Apps such as Google Latitude, Youtube and Messenger which combine with all the other features to make this phone quite a worthy buy.

IT HAS TO BE KEPT IT MIND THAT IT IS A LOW COST PHONE AND YOU CANNOT EXPECT GREAT GAMING EXPERIENCE FROM IT. HAVE EXPECTATIONS ACCORDING TO ITS PRICE.

THE ONE OF THE MOST IMPORTANT THINGS to be KEPT in MIND, while looking for a decent phone is the INTERNAL MEMORY of the phone !

i want to buy this phone but having some doubt in my mind so plz anyone tell me the phone contains headset and data cable or not
btw the mobile have some attractive features like dual sim active, or 3 gb internal memory 2 for multimedia and 1 gb for applications which was far more than the galaxy y and galaxy y duos or flipkart also provide som special offers like internet facility for 6 month s tieup with reliance gsm so guys plzz but this phone this is worth it !
READ MORE

I would say a big no to this phone rather giving a thumps up. If u want to buy ur 1st android phones then dont go for this, since it is true that in android u will get maximum apps than symbian, wada, windows. But u dont know one thing that to run all the apps u need a good android phone budgeting round 15000. Since ur budget is not so high, then go for Samsung Galaxy Y duos not this 'LITE' version. This lite version is the dual sim version of Galaxy Pocket.

U can also go for HTC Xplorer or...
READ MORE

Y do you need to think twice when you are getting DUAL ACTIVE android phone for just 7k.
dont think about others' comment about battery backup.
that is also good, you will get it for one day like any other phone.
I bought it 2 weeks ago.
And I find this phone very handy.
If you want to use a good touchscreen phone you can go for this.

about flipkart, It took 4 days to deliver it to me.
I am happy as I got good stuff!!
READ MORE

I would suggest everybody to go for this handset.I made my mom purchase it as a present for my birthday. This is an excellent phone. The system memory is enormous(0.99GB) The only defect of this model is that battery backup is very very low;lasting maybe for a day or two. From the Playstore(Android Market), download speed is also very less.

You need to buy memory card on your own as it is not provided in the box. Be careful while purchasing memory card for this phone as it support only a fe...
READ MORE

Most best product used for at least more than 3 years in my life till now .

Most of the people should buy this mobile because it will continuously work .
It will never stop working and the excellent dilevary done by Flipkart. No argument are done by flipkart on the dilevary .This product has exciting features like u can send a mail or chatting ,no stoppage or hanging will appear .
READ MORE

its been 3 weeks since i got hold of my phone n so far i love it! the delivery happened within a day and the bill even included the details of nearest service centre from my location!
about the product well the inbuilt storage of 4gb is quite enough to install most of the apps and also there is not at all any lag when switching between apps. the screen size i feared might affect the touch typin but it works fine for me. the keypad can be changed to the 3x4 type if you find it uncomfortable i...
READ MORE

Well...staring on the laptop screen then towards my Samsung.
Yeah..It’s a beautiful white.
If you're going to buy a phone then firstly you've to think about your need. I'm not a good gamer or actually don't like to play games on mobile. I'm interested in photography so I didn't considered 2MP camera of this phone. Basically I love music and wanted to carry lots of songs, videos and pictures in my pocket. It's a compact and easy to carry type phone. Also playing lots of games like Paper-toss, ...
READ MORE

Superb choice to buy this mobile......
pls buy it.....
dont miss this.........
This phone is newer version of samsung pocket and have same functionalities also but overall performance is good and
it's good to have this affordable phone .
Some great features at affordable price
such as: dual sim (dual active),wifi, capactive touchscreen,wifi thethring ,gps are very good
but have one problem that it has small screen as compare to other popular smart phones.
READ MORE