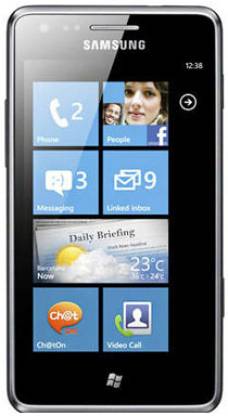 The Samsung Omnia series has a new entrant in the form of the Samsung Omnia M S7530. The phone comes in a bar form and is run on a Windows Phone 7.5 (Mango) OS. The operating system is backed up by a powerful 1 GHz processor as well as a 384 MB RAM to ensure the smooth functioning of applications on the device.

The screen of the device is an enlarged 4-inch Super AMOLED capacitive touchscreen which provides a WVGA resolution of 480 x 800 pixels.

The phone features a 5 megapixel primary camera which is backed up by an LED flash. The camera comes with other useful features such as auto focus, photo effects, image stabilization and a panorama view to click pictures over a wide horizon. You can shoot video with this primary camera and use the 0.3 megapixel secondary camera to conduct video calling.

The phone is a stylish looking device and comes in dimensions of 64.1 x 121.7 x 10.5 mm which makes the Samsung Omnia M S7530 quite a slim in size. The phone weighs in at a lithe 120 g which makes it very easy to hold in the palm of the hand. AMOLED technology enhances the viewing experience of the user. The accelerometer rotates the screen depending upon the orientation in which it is held. Additionally, the device also includes a proximity sensor and compass.

This Samsung device is run on a 1500 mAh Li-Ion battery for optimized battery life. The phone comes with an internal memory of 4 GB which is adequate enough to store a large part of your music and video collection. The device comes with a 4 GB ROM which holds the operating system of this phone.

This Samsung Omnia device will keep you connected to the internet over both the 2G and 3G spectrum. The device features GPRS and EDGE technologies to pore over the internet using 2G. The phone also comes packed with HSDPA and HSUPA technologies to browse the internet faster. The user can also utilize the WiFi capability of the phone to access a wireless network in the vicinity. Files and documents can be exchanged using the micro USB port or the Bluetooth function of the device. Additionally, the phone can be tethered using the WiFi hotspot function and can also serve as a navigation aid in the form of Bing Maps which uses assisted-GPS technology.

You can play media from the phone over a TV or desktop as well as access useful apps such as Marketplace, Yahoo Finance and SkyDrive. Social networking Apps like Facebook, Twitter and LinkedIn can be accessed at home, work or on the move to stay in touch with friends and family.

The phone is also an excellent entertainment aid as it comes with a music player, video player and an FM radio which combine with the other features to make this phone a worthy buy.

Indulge in the visual splendor of Super AMOLED on a huge 10.16 cm display. Clear, bright, and featuring brilliant colour, the display gives off less of a reflective glare, and you can keep messaging or tasking comfortably even under direct sunlight. It boasts greater energy efficiency with reduced power consumption and the battery charge lasts nearly 20% longer.

It's easy to keep connected and up-to-date with the most meaningful people in your life with Samsung's social networking, sharing and communication services. Family Story keeps your family pics, events and memos in cloud storage for anytime-access and easy sharing among all family members from almost any device. ChatON's free, universal messaging and communication service makes messaging, group chats and sharing content more fun, interactive and personal.

The clean, uncluttered design is perfectly proportioned for portability and comfort - a slim, compact form factor that is both striking and understated. The front is dedicated to the large 10.16 cm screen, while the back features a contoured grip that is pleasing to touch and hold.

Comprehensive communication and entertainment options satisfy the most multimedia-centric you. AllShare's cross-device media sharing provides flexibility and enjoyment so you can share content and watch movies, concerts and games on a TV screen. Park your extra media and files on Windows Live Skydrive to share or access the content whenever you want, while freeing up space on your phone. 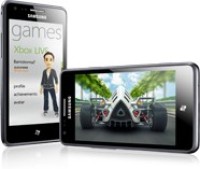 This is one of the best gaming and digital media platforms right on your mobile to play anywhere on your own or with pals while on the move. Sign in to see your gamer profile and keep track of scores, rack up your achievements, show off your gamerscore, rate apps and games. Customize your own avatar, play with motion detected gestures, suit up from avatar closet to create a personalized, unique avatar. There's loads of free and premium content to download from the Marketplace - games, movies, TV shows and apps.

Video calling becomes second nature for social networking and casual chats with friends whether they're in your own town or across the globe. Front-facing camera and awesome audio quality make video calling as easy and convenient as voice calls. Embedded Tango application is optimized for mobile for free video calling any time. You'll also conserve your mobile data plan while you're at it. You'll be impressed by the high-quality video. 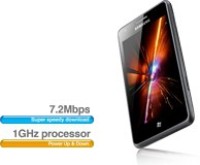 Never underestimate the advantages of strong CPU power with a 1 GHz processor that improves the functionality of your mobile greatly. Feel the difference from the start - from booting up your device to navigating the UI, to softer screen transitions and applications, multimedia and multitasking - everything's a breeze. Faster data transmission rates enable you to download data in half the standard time so you get your videos, games and apps in a flash.

Make the most of your lust for life and love for making connections through convenient communication, social networking and content sharing features. The large 10.16 cm screen is designed for clear viewing and staging your content for sharing. Enjoy the best multimedia and enjoy interacting with friends and families through your favourite apps, games and video calls while keeping pace with your fast-paced lifestyle.

I think samsung has done mistake by introducing a new windows 7.5 devices, when world is get readying for windows 8.I don't know what they have on their mind and what prompted them to go ahead with another new device, which in mean time going to become absolute.

I am sure my eye is working properly, but i think i saw 4GB is the storage capacity of these device. just 4GB?!!!, samsung please don't tarnish your reputation yourself.It is such irony that this kind of clidish move is coming from ...
READ MORE

i am genuine user of SAMSUNG OMNIA W. THIS ONE IS NO WHERE CLOSE TO THE WONDER.Please dont listen to shit heads before buying. I will be happy to buy a micromax against this phone. pathetic specs, worst look, and ripping price..buy a omnia W outside,costs you 15k+ and then u wouldnt even look at this one..
READ MORE

1st of all, I m using OMNIA w, which was relased earlier by Samsung... M Still totally confused why samsung has came with this product with low features and high price..... I hav purchased Omnia w after comparin with Lumia.... The main factor was similarity in everythin but the plus points were Front camera nd super amoled screed... now If I compare all the specs with Lumia 710 too, it is far behind nd moreover the prices are on a higher side....
What was SAMSUNG launch time is doing...
READ MORE

Nokia lumia 710 much better specs than this phone.

Not sure if 15900/- is the actual price for this phone. If that is the price Samsung has decided for India then Lumia 610 is better option for its build quality, design and looks.
READ MORE

I just saw this phone in one of the shops over here. Looks OK. Feels OK. 4GB memory and 384 MB RAM? And pricing it at 16k when Lumia 710 is 15k? What was Samsung's product manager thinking?

This phone is cheaper than the nokia lumia 610, and comes with better specs too, it got a 1ghz processor and more ram 384 mb, the screen is bigger 4inch super amoled. The only advantage the lumia 610 has is of 8gb storage while this one gt 4gb. Rest there is a front camera too in omnia m, so at this price if u can compromise at the memory then you should go for it for sure, as on other websites it is overpriced but here it is just value for money !
READ MORE

the reviews are old... look at the current pricing!!

this is some what ugly set on photos bt when u have it in ur hands u'll get to know the real worth... 10\10 for value for money . design wise average.. the screen is the best in this segment and software is the smoothest a phone can get of this range. i'd say it works as good as phones worth above 15k and any challenges lumnia 710 very easily... very criticised phone because of the pricing but samsung has slashed 4000 and right noow this is the best phone for 12k in the market.... dnt go for ...
READ MORE

Samsung is so smart that it have used the complete hardware of the Samsung Galaxy S1 with LED flash light and worked out with windows phone 7.5 OS. Thought Samsung Omnia M is 4 inch AMOLED it has only 1GHz processor where as Samsung Omnia W has 1.4Ghz processor.

Wake up samsung! Indians are not fool!

Why buy this outdated crap when Nokia's Lumia 520 is already available at same price with latest Windows Phone 8 and all great and exclusive Nokia apps?

Samsung is making Indians fool by still trying to push this outdated phone with absolutely no support from both Microsoft and Samsung. Nokia at least has own support for old windows phone 7.8 and moreover a full range to choose from latest windows phone 8 and latest hardware with dual core processors, SD card slot at very reasonable price an...
READ MORE