The Samsung W279 is a multifaceted device which is capable of catering to the user’s entertainment as well as connectivity needs. The phone comes in a bar form and has a dual active SIM (CDMA GSM) capability for users who require separate SIM cards for work and personal purposes.  The device uses a Polaris browser for the user to surf the internet and comes with an alphanumeric keypad under the screen.

The device supports 2G as well as 3G networks and comes in dimensions of 49.9 x 118.9 x 14.07 mm. The phone weighs in at 103 g which makes it a light device that fits easily into the palm of the hand. The camera on the phone is a 2 megapixel device and is capable of shooting video as well. The camera possesses useful tools like Shot mode and Photo Effects to simplify the usability of the camera.

The features of this device are powered by a 1200 mAh battery which promises to provide the user a talktime of 6 hours and an ample standby time of 160 hours. The device also contains an expandable memory slot which can boost the memory on the phone by up to 16 GB using a micro SD card.

The Samsung W279 is quite capable of keeping the user entertained when on the move. The micro SD card on the device is capable of holding the user’s music collection as the phone comes with an inbuilt music player. Additionally, the phone also contains a video player which can play MPEG4 format videos. The device also comes with an FM radio making the phone an efficient entertainment aid on the whole.

This Samsung device is highly capable of keeping the user connected on the move, at work or at home. The W279 comes with GPRS and EDGE technology to access the internet on the 2G network. The phone is also capable of connecting to 3G on CDMA network for a faster browsing experience. Additionally, the device is capable of exchanging files and documents using the micro USB port or via the Bluetooth function on the device.

The Samsung W279 also comes with useful features like Predictive text input, Alarm and Games. The phone also comes with Samsung’s SOS feature which sends out SMSs and automatically receives calls of selected contacts when the user is in an emergency situation and has activated the feature.

Read More
Product Description
Double up the fun with the all new Samsung Primo Duos. This phone will help you in staying connected with your social and professional lives actively with the dual SIM function. You can also stream movies, browse through your FB News Feed, update what's on your mind on social media sites or simply download the music of your choice thanks to internet speeds of up to 3.1 Mbps.

Thanks to the dual SIM function, you can separate your personal life from your professional life while keeping up on both fronts. The Primo Duos supports two card slots which are CDMA and GSM compliant. The GSM (900/1,800MHz) and CDMA (800MHz) connections will remain active consistently, so you can get the right call and messaging plans on two separate SIMs to make things more affordable. 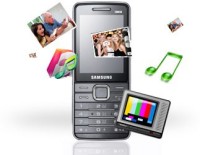 Watch television anytime and anywhere. With the stylish and fashionable Samsung Primo Duos, you can switch on the LIVE TV mode and access up to 100 live channels through the mobile TV application. The dynamic Primo Duos will surely be your only stop for multimedia entertainment.

Celebrate your independence with Samsung's OMH technology on the Primo Duos. Thanks to this feature, you can choose almost any CDMA operator, and the call/SMS service of your choice.

Stream movies, browse through your FB News Feed, update what's on your mind as a status or download the songs of your choice with high-speed internet that can peak at transfer rates of up to 3.1 Mbps. Your Samsung Primo Duos is one of the best mediums for you to connect to the Web with its 3G connectivity.

Stay connected with your loved ones, always. The extended 1200mAh battery of the Samsung Primo Duos gives you an extended talktime. No matter where you are, your Primo Duos will never die out of battery, allowing you to enjoy life in full swing.

Thanks to Flipkart's for giving a chance to re post my reviews as I made some wrong assessments before using it fully.

I bought this phone few days back from a retail store as my primary calling phone.

Most importantly the build quality: superb, back panel is SS, so no issues with scaling of paint finish due to scratches and mishandling etc.

DO NOT BUY THIS PHONE

I have bought this phone 2 weeks ago, its has lots of disadvantages over advantages.
Pros: 1. Large screen and bright display
2. Dual SIM active at the same time

Cons:
1. Music Player does support Back-Ground Music Play, So you can't do any work with listening Music.
2. No separate Wallpaper for two different SIM, so you may confused which one is primary, because icon is not very clear.
3. Each time of switch SIMs, you have to press buttons at least
3 times to switch network, be...
READ MORE

Nice one to buy for GSM _ CDMA HANDSET.

Overall its a awesome set to buy but in my opinion its a bit highly priced. But looks wise its classy and sober. Battery backup is dissent. Camera quality is also very good.
Battery lasts a day and half. Sound quality is simple with basic features. Display is also quite good.
A Good Buy For anyone.
READ MORE

Using Samsung sch w259 from last two year, due to good performance i bough same another one 1 year back.. battery back is good, can be used for two day.. 2 year old phone contact memory is being deleted once data crosses 692 contacts, whenever phone battery and sim reinserted all 692+ memory deleted automatically... Other wise mobile rest functions is ok..like camera, speaker phone is very good.. I have ordered 3rd new model due to satisfactory performance..
READ MORE

its a very nice phone, solid battery backup, completes serves my purpose of having 2 sim with one CDMA sim, and again a bar phone as i dont like touch phones a lot
READ MORE

Using since 3 months and till now I dint face any negatives with this mobile. Great value for money. There is no much better mobiles in CDMA & GSM combo. But this one fills if you looking for CDMA & GSM. Great battery back back up.
READ MORE

Wow.. Express and Excellent Service by flipkart.. thank you.. and the product is brand new. good mobile but only negative in that we can use internet only in cdma not in gsm :( more over mobile is fine.. but in 6k rates this mobile is good than others..
READ MORE

i wanted to buy a CDMA non-touchscreen phone, checked a lot of options and finally bought this one. Simply great, the keys are very good and a pleasure to touch. the Screen resolution is awesome! and the overall look and feel of the phone is very solid. single touch switch b/w networks makes it very convinent to use. comes with a very good pair of headphone, with awesome sound quality.
READ MORE

I today surveyed available dual sim mobs of required qualities. I found this may be the best choice to order and I ordered today. Main reason that TATA DOCOMO (cdma) launched unlimited talk/calls within India on any mobs or land lines for Rs.1000/- P.M. Ufcource, I do use Samsung Galaxy S II as my other utility phone.
READ MORE

Good phone in (CDMA+GSM) But costly with its reduced features

i was waiting for this product but i am upset now with its price and related features in that price.
it reduce some features that primo cover with it prior model that is samsung primo

9
2
Permalink
Report Abuse
+
All 16 reviews
Have doubts regarding this product?
Safe and Secure Payments.Easy returns.100% Authentic products.
You might be interested in

Pen Drives
Min. 40% Off
Shop Now
Back to top