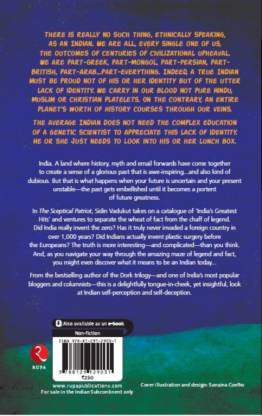 The Sceptical Patriot - Exploring the Truths Behind the Zero and Other Indian Glories (English, Paperback, Vadukut Sidin)

The Sceptical Patriot - Exploring the Truths Behind the Zero and Other Indian Glories  (English, Paperback, Vadukut Sidin)


Sidin Vadukut cannot go wrong with humour. He has proved that with the Dork series and does not need to prove anything. His writing is razor sharp and biting. This time his book is about India – the hypocrisies we harbour and how we are still stuck in the past, as a nation trying very hard to move ahead and keep up with the times.


The book is hilarious and yet it is tongue-in-cheek. It is about India’s facts and how Sidin questions the legitimacy of them. Are we then that a proud nation? The book is funny and extremely insightful. Vadukut’s writing is crisp and clear and stands out as a separate identity.

India. A land where history, myth and email forwards have come together to create a sense of a glorious past that is awe-inspiring...and also kind of dubious. But that is what happens when your future is uncertain and your present is kind of shitty-it gets embellished until it becomes a totem of greatness and a portent of potential. Sidin Vadukut takes on a complete catalogue of India's Greatest Hits and ventures to separate the wheat of fact from the chaff of legend. Did India really invent the zero? Has it truly never invaded a foreign country in over 1,000 years? Did Indians actually invent plastic surgery before those insufferable Europeans? The truth is more interesting-and complicated-than you think.

A path-breaking book that questions the legitimacy of a range of popular India facts, be it theclaim that the country invented zero, or the assertion that Indians have always been peace-loving, or the belief that Sushruta was the worlds first surgeon.

An important title that makes us reassess history and understand its significance.

Is written in a style that is accessible, humorous, irreverent. 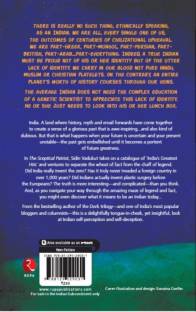 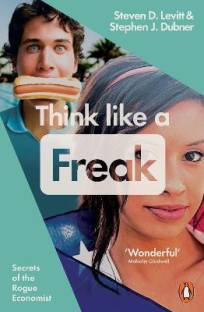 A must-read for any Indian living in the internet era

Well, well, well. What a fantastic piece of pop-history, non-fiction this is!

In short - Sidin goes on an adventurous (and potentially life-threatening, if you take extreme nationalists into account) journey to look at popular 'India myths' that do the rounds on email and Whatsapp, and proceeds to verify them using research.

ACTUAL research, not just a quick check on Wikipedia! There are around 7-8 myths he looks at and gives each of them a score.

It's obviously a lot more 'serious' than h...
READ MORE

Makes you want to pick up your history text books once again!

The Sceptical Patriot is a superb read. It takes a cruise through popular Indian myths floating around these days. Not the ''Jana Gana Mana is Best national anthem by UNESCO'' kind, but some stuff that people have been believing in for ages now.

I particularly enjoyed the chapters on Marconi-Bose-Wireless Radio and the whole 'invention' funda and the myth of India being the richest nation in the world at one point of time; and the 'How zero came around' story. The narrative writing with pers...
READ MORE

I was wondering what sidin would write in such a book given his history with great fiction based comedy but it was not a bolt from the blue,I mean I love this man's tweets about India and questions that he asks and love his surprisingly not boring podcast about Indian history but from readers point of view a combination of history plus comedy was very sceptical for me but boy he has done an awesome job!!!!

To be brief the book is about "Indian facts", yes the so called great-feel-proud facts...
READ MORE

I read and then re-read Dork Series by Sidin Vadukut. here also the thrill & raw humor was diminishing after each sequel. nevertheless all made good reading.
However "The Sceptical Patriot " was a total washout. One straight away gets the feel that the author is being compelled to think out of his skin. In end all he presents is half baked ideas with meaningless arguments. There is not much rationale behind his logic. at times he argues against noble laureates in finance and other streams thr...
READ MORE

I think the people who are giving this book bad reviews are taking it a little too seriously. Sidin himself says in the introduction that the book is just "intended to be good fun". It is in no way a definitive book on Indian history. Just a healthy dose of fun and scepticism which needs to be applied when listening to often repeated "India facts".
READ MORE

Good Book for every Indian

This is really a good book. A must read for every Indian. The writer has done a good amount of research for writing this book. This research should be utilized by reading this book.
The language is simple.
I have still not completed the book. But I am sure the remaining pages also will will liked by me.

Great Indian facts and myths put together in a very good manner. The stories and incidents mentioned are very interesting and informative. The author's efforts while researching for the content are commendable.
READ MORE

An entertaining and informative read. It felt like I was talking to a fairly well read friend - a conversation that encouraged me to think, to question, to comment. A conversation punctuated with side stories, interpolated with funny personal episodes, and basically giving me a lot of information. It is up to me to read further and discover more, or take this friend's words at face value.
READ MORE

If you want to clarify your doubts on pre-historic and historical facts related to India, you must read it. The text tells about many Indian facts like the invention of zero, surgery, India never invaded any country and many other popular sceptical facts which roar over the internet.
The paper quality is good and Flipkart delivers the genuine product.
READ MORE

For the curious types

Do read this if you always wondered about certain "India facts"... As usual Sidin is very meticulous in his research.. read it for the pleasure of reading like the good old times sake and to appreciate author's labour of love...
READ MORE

0
0
Permalink
Report Abuse
+
All 51 reviews
Have doubts regarding this product?
Safe and Secure Payments.Easy returns.100% Authentic products.
You might be interested in