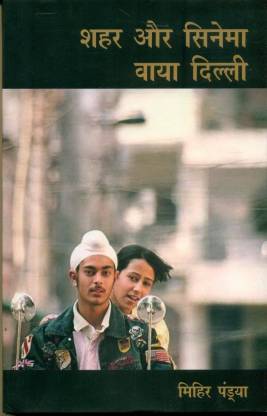 The book examines representations of the city, specifically Delhi, in Hindi cinema over the decades. Talks about different identities of the capital city, immerging from cinema. The city of power – where nation’s hope and despair translates into their imagination of the city. The city of everyday life – where everyday life of a common man shows us Delhi’s distinct characteristic and different structural dimensions of the city. It talks about Nehruvian modernism, hope, disillusioned youth, friendships, identities,  love and the ‘insider-outsider’ debate in the contemporary Indian city.

There are essays on movies ranging from Ab Dilli Dur Nahin, Tere Ghar ke Saamne and Chashme Buddoor to Hazaaron Khwaishen Aisi, Khosla ka Ghosla and Dev D, as well as the transcript of a long conversation on cinema and Delhi, which was organised especially for the book - the discussion features Mihir along with writer-historian-Dastango Mahmood Farooqui, NDTV India’s Ravish Kumar, Delhi Belly writer Akshat Verma and from CSDS writer-historian Ravikant.

Book also has a detailed list of Delhi films - films with references of city Delhi in it. There are more then 50 films with full details of credits and a long note on every film - on each film’s Delhi connection and with all the nuances.

About the Author
Mihir Pandya: (b. 1985) is Research fellow at University of Delhi, working on contemporary City in Indian Popular Cinema for his doctorate. He has written columns for Nav Bharat Times, Tehelka (hindi), Kathadesh in past and essays for pratilipi, jansatta, vaak, medianagar, bahuvachan among other publications. Sub-editor at the Hindi journal Banaas, and part of the editorial team at Chakmak, Eklavya’s children magazine. Blogs at Aawara hoon (http://www.mihirpandya.com) and can be contacted at miyaamihir@gmail.com.

Read More
Specifications
Manufacturing, Packaging and Import Info
Ratings & Reviews
4.6
★
9 Ratings &
0 Reviews
Have you used this product? Be the first to review!
Have doubts regarding this product?
Safe and Secure Payments.Easy returns.100% Authentic products.
You might be interested in