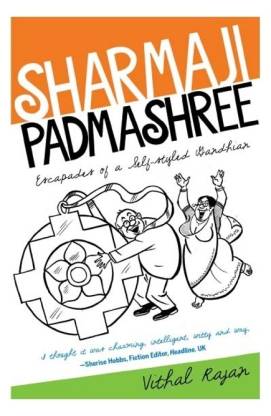 Description
Sharmaji Padmashree charts the life of a respectable middle-aged leader of an NGO in an ironic and witty manner. The protagonist, Vedavyas Sharma, is as much a victim of his circumstances and his profession, as a wilful perpetrator of shady deals in the name of development and benevolence. The NGO manager is not such a dedicated Gandhian leader of civil society as development organizations make him out to be. Most times, the officials, the foreigner donors, academics, feminists, businessmen with a social conscience and other do-gooders are no better than he is, though they do not see as clearly what they are about as he does.

Vithal Rajan, OC, BA Hons (McGill University), PhD (London School of Economics), has worked as an officer at Canadian Industries Ltd (ICI), Canada; as a mediator for the Church in Belfast in the 1970s; as a founding faculty member for the School of Peace Studies, University of Bradford, UK, as Chair of World Studies, International School of Geneva, as Director, World Wide Fund for Nature International, Switzerland and as Executive Director, Right Livelihood Award, Sweden (also known as the Alternative Nobel Prize). He has founded several Indian NGOs and he was made an Officer of the Order of Canada for his life-long service to humanity. He is the author of several books of fiction and plays, including The Legend of Ramulamma, Holmes of the Raj, The Year of High Treason and Mangues de Tara.
Read More
Specifications
Book Details
Contributors
Have doubts regarding this product?
Safe and Secure Payments.Easy returns.100% Authentic products.
You might be interested in
Reference Books
Min 20% Off
Shop Now
Medical and Nursing Books
Min 20% Off
Shop Now
Other Books
Min 10% Off
Shop Now
Mathematics and Science Books
Min 20% Off
Shop Now
Back to top